Forum List What's new Dark Style Change width
Log in Register
What's new Search
Menu
Log in
Register
Navigation
Install the app
More options
Dark Style
Close Menu
Posted on February 21, 2019 by Sam Posten
You are using an out of date browser. It may not display this or other websites correctly.
You should upgrade or use an alternative browser.
Shoot me 2 Stars 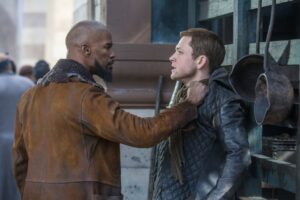 Lord Robin of Locksley (Taron Egerton) interrupts a thief from stealing one of his horses. Turns out she, Marion (Eve Hewson) had preconceived notions of what he might be like, which he immediately corrects. As they fall for each other Robin is sent by the Sheriff of Nottingham (Ben Mendelsohn) to support England in the Crusades, for four years. While there Robin protects an Arab warrior (Jamie Foxx) who is trying to prevent his son from being executed. In doing so Robin is critically wounded and the Arab escapes. Believing him to have been killed in battle, Marion has moved on with her life and is now helping to organize the local mine workers along with new flame Will (Jamie Dornan).

Returning home to find his estate in ruins, Robin is convinced by the Arab, to confront the Sheriff and the Cardinal (F Murray Abraham) who are conspiring together. Yahya the Arab becomes John, and teaches Robin the ways of fighting with a shorter, faster bow. Robin takes on the persona of ‘The Hood’, and begins a movement aimed at giving power to the people and ending the cruelty the Sheriff and Cardinal have waged upon Nottingham. 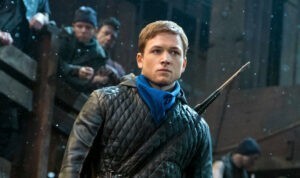 Robin Hood 2018 is an attempt to re-imagine the well known myth with modern twists. The medieval political underpinnings map to those that frustrate modern audience’s life, and miraculously the weaponry of the time is now more akin to machine guns than to elegant and slow long bows. If that sounds like a mess that has more problems than delights, you are correct. This Robin Hood sets up an origin story with the intentions of a blockbuster franchise, but leaves out charm, wit and purpose in doing so.

Taron Egerton had the advantage of being guided with class and nobility in the Kingsmen series but can’t count on Jamie Foxx’s John’s revenge motives to elevate him here. What’s left is a mishmosh of political motivations bookended by big budget action sequences that substitute horse chases for cars and Arabian city sieges that would be more at home in Assassin’s Creed. Even the talented F Murray Abraham is left with little to do but minor scheming and bold predictions of unlimited power. Ben Mendelsohn’s Sheriff is at least somewhat well formed, and played with sinister appeal that he nailed so well in Ready Player One. And Tim Minchin’s Friar Tuck is likable and funny, but ultimately present in too few scenes.

At the heart of the story is a disjointed love triangle, with Will obviously getting cut out early and transformed from rival, to ally to villain.

The whole thing just feels hollow and a setup for future sequels without ever resolving the inner conflicts of the characters or giving the audience anything to care about, despite the very obvious attempts to draw parallels to daily life today. 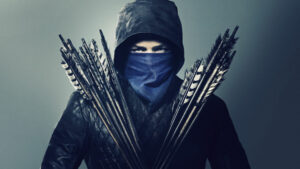 It sure looks good. And that’s in HDR10 for me. Dolby Vision and HDR+ encodes are on the disk as well. The two main action sequences present opportunities for tons of flying debris and arrows whizzing through the environments causing destruction. Colors pop and dark sequences are nicely contrasted with deep inky shadows versus torch lit main subjects. It’s sharp sharp sharp, with visible pores and clothing patterns in closeups. There’s a fine layer of likely artificial film grain which gives it a classic look. 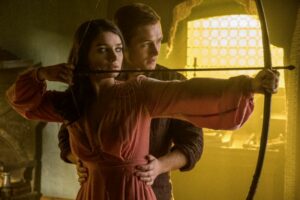 A solid but not amazing Dolby Atmos track. Arrows whiz to all corners nicely and there are a few sections where deep base rumbles can be felt from powder keg explosives and horse hooves, but the focus on bowfights over modern artillery are somewhat limiting as to what we can expect. There’s good height data too with whooshes up and down as debris falls and items are lifted from below. 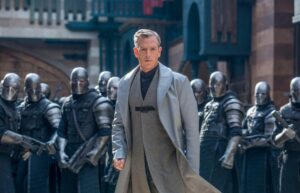 There’s a 7 part making of segment called Reshaping Robin Hood that repeatedly pushes the ideas of making a modern Robin Hood that audiences can relate to in perspective with current political climates. If this movie did more for you than it did me you will enjoy it. Personally I wasn’t motivated to go through all of it, tho the segments on casting and bow fighting were highlights.

There’s also a gag reel and a collection of wisely deleted scenes. Meh.

Ultimately Robin Hood is a miss but not a disaster. The script had some good intentions as far as giving meaning to the reboot but the end result didn’t quite measure up, especially with the weight of overt politics dragging it down. There’s some fun action sequences and good performances in it. It’s just that they are not enough, and for all the efforts to create something that might have future sequels, I’m not certain that will ever happen. 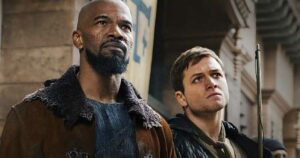 Anyone have a chance to check out this disk yet?

Frankly, I have zero interest in this film as I've long grown tired of Robin Hood remakes.

Same here Robert, and the trailer for this film turned me off 100%. I seriously doubt I'll even bother to rent it.

I don't understand the overall rating of 2, when nothing from the production to all the disc elements rated less than a 3.5? I seem to recall from somewhere that the overall rating is not necessarily an average, but it seems to defy logic.

I picked up the 4K from Walmart. Will likely watch it next week.

Malcolm R said:
I don't understand the overall rating of 2, when nothing from the production to all the disc elements rated less than a 3.5? I seem to recall from somewhere that the overall rating is not necessarily an average, but it seems to defy logic.

I picked up the 4K from Walmart. Will likely watch it next week.
Click to expand...

Malcolm R said:
I don't understand the overall rating of 2, when nothing from the production to all the disc elements rated less than a 3.5? I seem to recall from somewhere that the overall rating is not necessarily an average, but it seems to defy logic.
Click to expand...

You missed the star rating. The movie itself is 2 stars out of 5. I scored it a production rating of 3.5 out of 5 because the movie and the disk both have high production value. The overall is not an average, and the production value and high AV quality were not sufficient for me to raise the overall rating above a 2. Everyone will rate things differently, this is how I see it =)

Hard pass for me. Too flashy and generic looking.

I found this very fun and enjoyable personally, and the visual style is first rate. The script dialog is the movie's main weakness, but everything else is much better than reviews imply if you ask me. I'm not someone who hates remakes on spec though, so... *shrug*

I'm mostly on the same page with Sam's thoughts. The opening of the film tries to reframe the story as more than just a simple "steal from the rich to give to the poor" parable, into a more grandiose "oppressed rising up to overthrow their oppressors." I don't think it really ever reaches those heights, and doesn't really add anything new to the Robin Hood story itself.

As a popcorn action romp, it's not bad. We enjoyed the action scenes and there was some humor, mostly from Friar Tuck. But as Sam said, it's really the origin story and set-up for a future franchise. Nothing is really resolved in this film.

it's kind of a shame this was not released in 3D, as there seemed to be several scenes planned/framed for 3D presentation.
You must log in or register to reply here.