Psychological thriller is good but not great. 3.5 Stars

Joel Schumacher’s psychological thriller 8mm features a harrowing and oftentimes ugly look at the worlds of illegal pornographic movies and snuff films. As one might expect with this kind of subject matter, the story is not for the faint-hearted, and the director does his best to stay authentic to some gruesome material while at the same time not pushing the boundaries of taste too far off the charts. There are lots of famous faces here doing top-notch work even with themes which at times can be stomach-churning.

Successful and much-in-demand private detective Tom Welles (Nicolas Cage) lives a normal life with his wife (Catherine Keener) and infant daughter, their only seeming problem being his inability to give up smoking. A wealthy and influential widow Mrs. Christian (Myra Carter) has found what appears to be an 8mm snuff film featuring the slashing murder of a young girl among her late husband’s belongings, and for the sake of her own peace of mind, she wants Welles to determine if the movie is real or fake. Welles’ investigations take him all over the country, first in search of the girl’s identity and then to discover the identities of the film’s producer and director eventually winding up in California where a video store employee (Joaquin Phoenix) helps him infiltrate the dangerous and depraved world of illegal porn movies.

Most famous for his electrifying script for David Fincher’s Se7en, writer Andrew Kevin Walker has imbued his screenplay with procedural elements in the early going (Welles’ investigations take him from Cleveland to North Carolina, then to Hollywood and finally to New York City), nicely and smoothly guided by director Joel Schumacher until the tone of the movie turns from snooping (in some nicely ingratiated montages especially in Hollywood) to vigilantism (true, once Welles jumps down the rabbit hole of the underground pornography world with quite a few unbalanced individuals in his midst, his family’s safety becomes an issue causing him to turn from detective to stalker). Restitution turns into retaliation as Welles becomes the target of desperate men trying to cover their tracks from someone they never expected would be able to track them down. Schumacher uses his widescreen canvas to get the most out of the film’s fiercest scenes, especially the warehouse showdown between Welles and his underground guide Max with the film’s producer, director, and killer, a mammoth man in a leather mask known as “Machine.” While the movie deals in the shadowy world of underground porn, Schumacher does not rub our faces in the disturbing sadism and torture. We get glimpses of the violence and degradation (certainly enough to make the movie’s tone quite off-putting unless one is in the mood for the sleaziest of the sleaze), but we are thankfully spared lengthy graphic indulgences in this netherworld. The violence in person-to-person interaction, of course, isn’t spared, and the movie offers a full quota of death and destruction.

The disc offers two variations of DTS-HD Master Audio: 2.0 stereo and 5.1 surround. Using the latter for the purposes of this review, the lossless track is a superb one with clear dialogue which has been effectively blended with the variable music score of Mychael Danna and often very active sound effects which keep the available channels quite busy and immersive. There are no age-related problems with the sound mix here.

Audio Commentary: producer/director Joel Schumacher offers a breezy, chatty rundown of the film’s production letting each scene spur his memories about the personalities of his actors, the various locations used in filming, and problems he had in paring down the film from an NC-17 to an R rating.

Vintage Behind The Scenes Featurette (5:07, SD): a press kit trailer revealing the actors, director, and theme of the movie.

While it doesn’t have the richness in characterization, story, or tone as Se7en, Joel Schumacher’s 8mm offers a tantalizing psychological terror trip through some disturbing and quite vexing landscapes. This new Blu-ray release from Shout Factory is a very impressive improvement in picture and sound from the quite old DVD release. 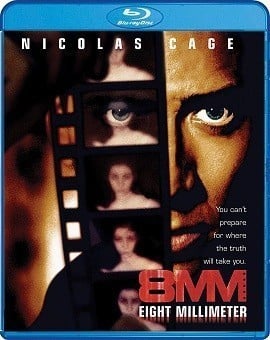