Delightful until the third act 4 Stars

Returning from the crusades twenty years after defeating Prince John and the Sherriff of Nottingham, Robin Hood (Sean Connery) and Little John (Nicol Williamson) find Sherwood Forrest very different than when they left it. They meet up with Friar Tuck (Ronnie Barker) and Will Scarlet (Denholm Elliott), who inform Robin that Maid Marian (Audrey Hepburn) became the abbess of a nunnery shortly after they left for the Crusades, and that the Sherriff (Robert Shaw) is about to arrest her as religion has been outlawed by King John (Ian Holm). The four rescue Marian, against her will, and return to Sherwood, setting up a final end to Robin and the Sherriff’s rivalry.

Robin and Marian played in a fairly constant rotation on Showtime and Prism (a local movie and sports pay channel) in the early 1980s when my parents finally decided to bring cable television into the home. I tired many times to sit down and watch the film at that time while I was in my late teens, finding the film slow and rather boring. Fast forward 35 or so years later, my tastes becoming much more eclectic and having more patience, I get the chance to view it again. And I have to say, for most of the film’s running time, I really enjoyed it. Connery (who was in his mid-fifties at the time) has some good chemistry, not only with Audrey Hepburn, but also with Nicol Williamson (who has some of the best lines in the film). Robert Shaw is very menacing as the Sherriff, eager to please his newly crowned king. But the movie takes a rather surprising and downbeat turn as the third act concludes, leaving the audience on a very somber note.

Sony’s AVC-encoded 1080p transfer, which presents the film in its original 1.85:1 aspect ratio, is simply gorgeous. Film grain is noticeable but never intrusive, providing a more theatrical and film-like appearance. Colors are accurate and well-saturated without looking artificially enhanced. Detail is very good, including wrinkles and salt and pepper beard stubble of the male stars. Blacks are deep with good shadow detail, while whites are bright without clipping.

The DTS-HD Master Audio 2.0 mono track is free of any noticeable hiss and pops, adding some nice fidelity to dialogue, sound effects, and John Barry’s score (which I read that the director Richard Lester actually disliked).

Theatrical Trailer (1080p; 3:10) The trailer appears to have been upscaled from an interlaced analog standard definition video source.

Fans of both the film and its stars will be pleased with the presentation and to (finally) have it on Blu-ray.

Thank you for the review Todd. I have been a fan of this film since its first release. Apart from the superb acting and direction I have loved the John Barry score since first hearing it.
My Blu arrived this week and I look forward to revisiting Robin and Marian over the weekend.
Reactions: PMF

Thanks for the review, Todd. I had never seen this film, but watched it today via the TCM app on my Apple TV. Overall, a very good film, but the ending didn't sit well with me.
Expand signature
My DVD Collection

Connery was actually 46 at the time.

BarryR said:
Connery was actually 46 at the time.
Click to expand...

44 during filming, though he does look like he could be in his mid-50s.
Last edited: Aug 20, 2019
Expand signature
Sealed with a curse as sharp as a knife. Doomed is your soul and damned is your life.
Reactions: BarryR

Worth said:
44 during filming, though he does look like he could be in his mid-50s.
Click to expand...

Russell Crowe was 46 (if I've worked it out right) when he played Robin Hood in the Ridley Scott (very disappointing) film, & that was supposed to be the start of the outlawing career! Crowe looked puffy & tired in it (with an accent that roamed all over the UK).

I have the DVD so I might have to pick up this Blu-ray.
Expand signature
Crawdaddy's favorite "The Mandalorian" Quotes: "This is the Way" and "I have Spoken" 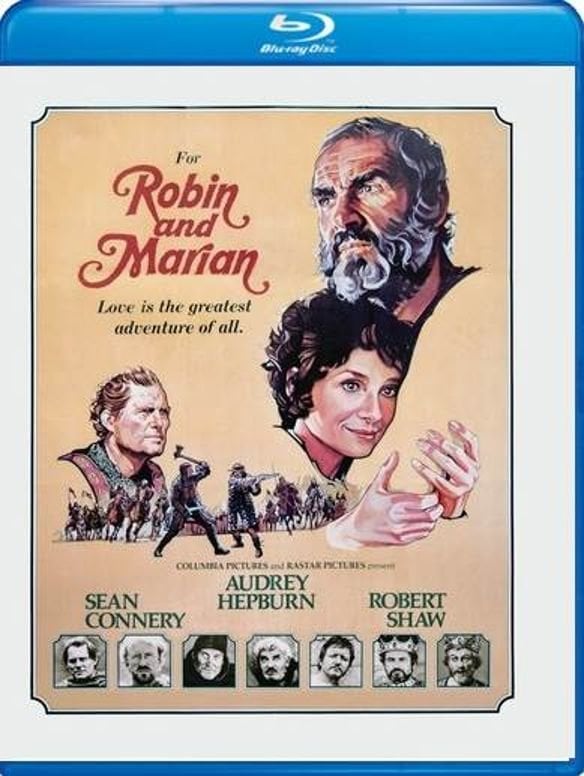