RED, based on a series of DC comic books, is an often hilarious action-comedy about retired CIA agents who are slated to be retired permanently. This is quite possibly Bruce Willis’ best movie of the current decade.

Frank Moses (Bruce Willis) is leading a rather mundane life after retiring from the CIA. To help pass the time, he pretends that his pension checks have been getting lost in the mail, giving him an excuse to strike up a phone relationship with case worker Sarah Ross (Mary-Louise Parker). Sarah is also bored with her life of living alone and occasionally going on blind dates, her only excitement coming from speaking on the phone with Frank and reading trashy spy-romance novels. When a hit squad fails at taking out Frank late one night, Frank rushes to kidnap Sarah in an attempt to save her life from the assassins hot on his trail. Also hot on his trail is CIA agent William Cooper (Karl Urban), who is running the off-the-books op to take down Frank and his former partners (Morgan Freeman, John Malkovich, Helen Mirren) that helped clean up a messy extraction in Guatemala, looking to make a major career move out of it.

The plot of RED is sometimes preposterous (it’s illegal for the CIA to operate any kind of operation on US soil), but what makes the movie work is the smart screenplay by Jon and Erich Hoeber that doesn’t take its audience for granted, the fast-paced direction of Robert Schwentke (Flightplan, Divergent Series: Insurgent), and the performances by its now well-known cast. Frank Moses could very well be Bruce Willis’s best role since John McClane in the Die Hard movies. He’s smart, charming, and even vulnerable when around Sarah. The almost always dependable Morgan Freeman is having fun playing Joe Matheson, who can still play the game despite being sidelined with stage four cancer. John Malkovich does what he does best, playing the paranoid and often delusional Marvin Boggs. Helen Mirren is graceful as retired MI6 assassin Victoria. Brian Cox gets a lot of comedic mileage out if his role as the love-smitten Russian agent Ivan Simonov. Karl Urban’s William Cooper is the straight man in the piece, a family man trying to keep his secret agent life separate from his home life while still trying to make a major career move. Finally, Mary-Louise Parker is the character the audience can relate to as case worker and fish out of water Sarah, who quickly finds this life exciting.

RED was shot on 35mm film and completed in 2010 as a 2K digital intermediate. Lionsgate, once again, has done a terrific job of upscaling to 2160p and graded using Dolby Vision HDR. My system decoded as HDR10 with very good results, providing a slight uptick in fine detail, more natural color tones, and improved contrast with deeper blacks and more-defined shadow details. There is some very noticeable judder during a 360-degree pan at the 4:05 mark. I checked the included 1080p Blu-ray (which was authored in 2010), and the judder is there, too, but not as pronounced.

Lionsgate has remixed RED in Dolby Atmos for this release, which will play back at Dolby TrueHD 7.1 for those without object-based audio equipment. The Atmos track has a much wider dynamic range and deeper LFE presence, and has some fun during the later action sequences with discrete surround cues in the rear channels. Dialogue remains clear throughout, without getting lost in the mix. A Dolby Digital 2.0 mix optimized for late night listening along with Spanish and French Dolby Digital 5.1 tracks have also been included.

Two things to note with this release. First, when the 4K UHD disc loads, it for some reason defaults with English subtitles on (the other two Lionsgate releases that were released the same day, The Cabin in the Woods and RED 2, have the same issue). Second, and this is a good thing, the 1080p Blu-ray is the much-sought-after Special Edition disc that includes a DTS-HD Master Audio 5.1 soundtrack and special features, as opposed to the easily and readily available movie-only disc that had a lossy Dolby Digital 5.1 soundtrack.

As with most Lionsgate 4K UHD Blu-ray releases, most of the Special Features have been ported over from the original Special Edition Blu-ray release. Missing are the PiP feature Access: RED and an Easter Egg that offered a glimpse into the film’s visual effects.

Audio Commentary with Retired CIA Field Officer Robert Baer: This is a very informative track, with Baer (who was a consultant on the film) providing insights into what it was like to be a CIA filed agent, as well as what the movie got right and what was wrong but allowable to move the plot along.

Deleted and Extended Scenes (1080p; 9:19): Gone in a Flash; You Have a Gun, Awesome; Help Me; I Wasn’t Ready; You Need to be More Careful; We’ve Both Been Played; Swimming With Sharks; Glass of Champagne; Spectacular Lack of Vision; and I Want a Margarita.

Digital HD Copy: An insert contains a code to redeem at UltraViolet partners such as Vudu.

RED is a fun, often hilarious action-comedy with a near-perfect video transfer and a spectacular Dolby Atmos track on 4K UHD, and includes the often hard to find Special Edition Blu-ray edition. 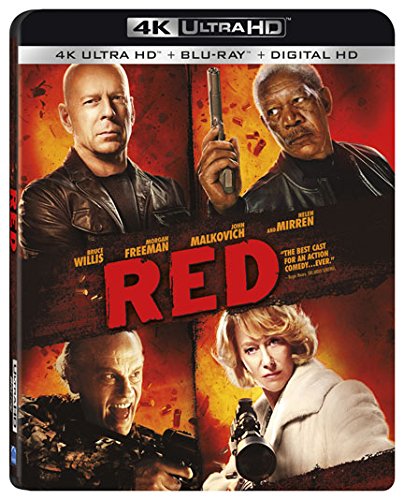