Forum List What's new Dark Style Change width
Log in Register
What's new Search
Menu
Log in
Register
Navigation
Install the app
More options
Dark Style
Close Menu
Posted on September 20, 2017 by Matt Hough
You are using an out of date browser. It may not display this or other websites correctly.
You should upgrade or use an alternative browser.
Sturdy, entertaining western 3.5 Stars

A meat-and-potatoes western dealing with the extended aftermath of the gunfight at the O.K. Corral, John Sturges’ Hour of the Gun is a gritty, fairly humorless western, much more interested in presenting the reality of the Old West rather than a fantasy version of it.

A meat-and-potatoes western dealing with the extended aftermath of the gunfight at the O.K. Corral, John Sturges’ Hour of the Gun is a gritty, fairly humorless western, much more interested in presenting the reality of the Old West rather than a fantasy version of it. With a fine cast of stars in leading roles and an interesting assortment of great character actors and soon-to-be stars supporting them, Hour of the Gun is an absorbing if unsurprising saga.

After being on the losing end of the gunfight at the O.K. Corral, Ike Clanton (Robert Ryan) first tries to take Wyatt Earp (James Garner) to court for illegal use of force having bribed the sheriff Jimmy Bryan (Bill Fletcher) to lie under oath. When evidence proves him wrong and exonerates Wyatt, Clanton hires a group of thugs to systematically eliminate the Earps one by one: Virgil (Frank Converse) who’s crippled rather than killed and then Morgan (Sam Melville) who’s shot in the back and dies from his wounds. Wyatt tries using the law to bring down Clanton for these attacks, but it, too, fails to convict him, so Wyatt and his friend Doc Holliday (Jason Robards) decide to, if possible, round up the men on Clanton’s payroll to use as witnesses against him before they can put an end to the both of them. As one after another of the gang falls to the guns of Earp and Holliday, it appears that leaving the law behind and meeting Clanton face-to-face will be the only way to settle the score.

This continuation of the Wyatt Earp story by its director John Sturges ten years after his Gunfight at the O.K. Corral proved to be highly popular has a very different tone from the first film, much more downbeat and unavoidably tragic in mood and atmosphere. The screenplay by Edward Anhalt paints a grim picture of frontier justice with bribed officials and intimidation on both sides superseding the law at just about every turn, so when Wyatt must inevitably toss away his badge and seek pure revenge outside the law, one gets the feeling of deep sadness over its utter inevitability. John Sturges proves as always the most unsensational of directors staging the opening gunfight at the O.K. Corral in a very matter-of-fact way, over in a few seconds with no fancy maneuvers to outsmart their adversaries and then staging all of the subsequent killings with little fuss and bother (there is one masterfully staged attack at a train depot that offers some surprises). By the time we take our final sojourn to Mexico as Wyatt hunts down Clanton after he escapes American justice, the final confrontation between protagonist and antagonist seems predestined, and yet, it’s also staged very prosaically and once again over in the blink of an eye: almost an anticlimax after going on such an extended journey to get to that particular moment.

This is one of James Garner’s most stoic performances. Almost always imbuing his characters with a wry personality and a sarcastic word or two, his Wyatt Earp is fairly humorless, almost all business from beginning to end and once his brothers become victims, grimly relentless in his pursuit of revenge. As it has done with so many actors who have taken on the role of Doc Holliday, Jason Robards scores a career high with the part, restraining the hacking, tubercular cough until late in the film and adding what little amusement there is in the movie with his deadpan delivery and matter-of-fact way of dealing with people he intends to kill. Robert Ryan, as imposing and intimidating as he is, is still rather wasted in the movie, restricted to only a few scenes where he stews in frustration at Wyatt’s ability to outmaneuver him and barks orders to his underlings to eliminate his despised enemy. Great character actors abound, however: Albert Salmi as a slippery prosecuting attorney (working for Clanton, of course), Karl Swenson as the town doctor, William Windom and Lonny Chapman as two men Holliday recruits as an Earp protective posse, Monte Markham as a territory sheriff Wyatt turns to for help, and the crew of henchman Clanton hires to wipe out the Earps: Bill Fletcher, Robert Phillips, Steve Ihnat, Michael Tolan, and the young Jon Voight.

The film’s Panavision theatrical aspect ratio of 2.35:1 is faithfully rendered in this 1080p transfer using the AVC codec. As with so many MGM high definition transfers, there is nothing wrong with the sharpness or color densities of the transfer which also has a strong, film-like look. There is plenty of detail to be seen throughout, and colors are strong and true without any blooming. But the transfer is also littered from beginning to end with dust specks, debris, and a couple of prominent scratches (one a bright, blazing yellow) which often annoy with their frequency. The movie has been divided into 24 chapters.

The DTS-HD Master Audio 2.0 mono sound mix is a strong and effective one for the film. Dialogue has been well recorded and has been combined quite professionally with Jerry Goldsmith’s spare, forlorn score and the atmospheric effects one expects with any western movie. There are no age-related problems with hiss, crackle, thumps, or flutter.

Six-Page Booklet: contains some color stills, original poster art on the back cover, and film historian Julie Kirgo’s incisive essay on the movie.

Hour of the Gun is an entertaining if somewhat dour western, aided greatly by a superlative cast and solid, unshowy direction by veteran John Sturges. There are only 3,000 copies of this Blu-ray available. Those interested in purchasing it should go to either www.twilighttimemovies.com or www.screenarchives.com to see if product is still in stock. Information about the movie can also be found via Facebook at www.facebook.com/twilighttimemovies.

Thanks for the review. My disc is on the way to me. I get the impression that I like this film a lot more than you do.

I'm very pleased that the images are presented in sharp focus because the DVD is a bit soft. I'm annoyed and disappointed that there are so many marks and speckles. Those defects should be easy to remove digitally.

Robin9 said:
Thanks for the review. My disc is on the way to me. I get the impression that I like this film a lot more than you do.

I'm very pleased that the images are presented in sharp focus because the DVD is a bit soft. I'm annoyed and disappointed that there are so many marks and speckles. Those defects should be easy to remove digitally.
Click to expand...

I like this film a lot too and the performances by the 3 main leads. But it is a downer, moody film so probably not for everyone. Most of the Hollywood westerns were changing to a dark tone around this time. No doubt an influence from the Spaghetti westerns that had become popular.
You must log in or register to reply here. 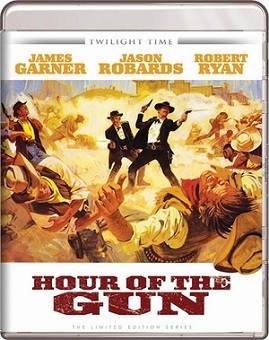