Filmed and almost completed and then scrapped, partially rewritten, and recast in three major roles, September still didn’t please its writer-director Woody Allen, and it’s easy to see why.

Perhaps the most famous thing about Woody Allen’s September isn’t that it was his least successful movie at the box-office from his United Artists/Orion period or that it was his first full-fledged drama since Interiors made almost a decade earlier but that it was the film that Woody Allen made twice. Filmed and almost completed and then scrapped, partially rewritten, and recast in three major roles, September still didn’t please its writer-director, and it’s easy to see why. Despite superb performances and beautiful production design that puts the viewer right into the midst of the turmoil welling up between its six main characters, the movie always seems to be spinning its wheels, churning on and on with the inner anguish of these people without discovering anything significant about their personas or arriving at any satisfying resolutions.

After attempting suicide, would-be photographer Lane (Mia Farrow) retreats to her family’s Vermont country home watched over by solicitous neighbor Howard (Denholm Elliott) and her best friend Stephanie (Dianne Wiest). Lane has also taken in a roomer for the summer, would-be novelist Peter (Sam Waterston) whom Lane has gradually fallen in love with. But Peter loves the married Stephanie, and she, while attracted to Peter, has a husband and children waiting for her in Philadelphia and would never think of betraying her best friend Lane. Meanwhile, Lane’s show business icon mother Diane (Elaine Stritch) and her husband Lloyd (Jack Warden) have also come to Vermont to check on Lane’s recuperation and take over running the house where Lane just wants solitude and time to hopefully nurture a relationship with Peter.

Woody Allen’s screenplay trods over some of the same ground of thwarted and conflicted passions that made Hannah and Her Sisters such a masterpiece, but there are no laughs here to temper the continual anguish of four of these six main characters. Howard, Lane, and Peter are all carrying the torch for another who seems unattainable, but if they have any lives apart from these longings, we’re never clued into them making them very one-dimensional characters. One of the reasons Elaine Stritch’s Diane walks away with the movie is that despite health problems and past scandals, she doesn’t wallow in her misery and continually live on the doubts and crushed hopes of the past but instead continues to take life by the throat and shake it for all its worth. There is a moment late in the film when Lane’s bottled-up rage and frustration comes spewing out (her major adolescent trauma is obviously based on an incident borrowed from the life of Lana Turner and her daughter Cheryl) when the agonizing drama finally seems to be going somewhere, but the moment gets quickly dispensed with and everything returns to its same tortured state. Allen has said that he wanted September to be a “play on film,” and with its heavy dependence on dialogue and a minimum of moving camera set-ups (unlike in A Midsummer Night’s Sex Comedy, we never see the lake everyone is talking about but remain mostly indoors throughout), it probably is as close as it could get to fulfilling its auteur’s ambitions for this project. Woody’s direction is secure but never showy, and the film has a gorgeously warm and inviting look to it. But the moping about and self-pity does get to be a bit much, so its 83-minute running time is truly a blessing.

As stated earlier, Elaine Stritch walked away with all of the notices when the movie was first released, and she’s, as always, a galvanizing presence: vivacious, headstrong, a powerhouse (Maureen O’Sullivan, cast in this role in the first version of September, could never have summoned up the charismatic hutzpah this role needed at this late stage of her career, likely the main reason the film needed a complete reshoot). Along with her strong work, Dianne Wiest probably gives the film’s next-best performance, struggling with her conflicted feelings over loyalty to her (admittedly) unstable marriage and the flattering luxury of seeing yourself in the eyes of a new love. Mia Farrow’s character is such a squashed victim of her own melancholy that she’s more irritating than pitiable. All three of the men: Sam Waterston, Jack Warden, and Denholm Elliott play their characters strongly as written, but none of them stand out with the same degree of aplomb as Stritch or Wiest. Rosemary Murphy pops by late in the movie as a real estate broker showing potential buyers around the Vermont summer house.

The film’s theatrical aspect ratio of 1.85:1 is faithfully rendered in this 1080p transfer using the AVC codec. This is one of the very strongest of the Woody Allen transfers from MGM and Twilight Time. Sharpness is exemplary throughout, and facial features, hair textures, and clothes all show much detail. It’s a very warm looking transfer with colors approaching autumnal tones and flesh tones very realistic and appealing. A segment when a thunderstorm knocks out the power allows the transfer to display rich black levels but with nice shadow detail predominating within the candlelit rooms. Only a stray dust speck here and there (very minor) prevent this from earning a reference quality rating. The movie has been divided into 24 chapters.

As with all Woody Allen movies of this era, the mono sound is provided courtesy of DTS-HD Master Audio 2.0. The dialogue has been brilliantly recorded and has been combined with blues and pop instrumental songs on the soundtrack with no issues of age-related hiss, crackle, or pops. A lack of much in the low end of the mix is the only small quibble.

Six-Page Booklet: contains some color stills, original poster art on the back cover, and film historian Julie Kirgo’s loving analysis of the movie.

A beautiful looking and thoughtful if ultimately slightly unsatisfying Woody Allen drama, September comes to high definition looking and sounding its best thanks to this Blu-ray release from Twilight Time. There are only 3,000 copies of this Blu-ray available. Those interested in purchasing it should go to either www.twilighttimemovies.com or www.screenarchives.com to see if product is still in stock. Information about the movie can also be found via Facebook at www.facebook.com/twilighttimemovies. 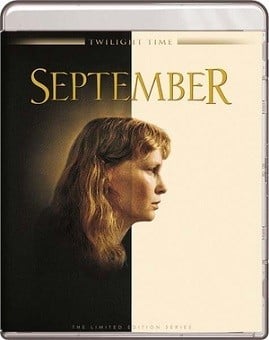