Posted on September 18, 2017 by Matt Hough
An average western emblazened by the use of 3D. 3.5 Stars

Raoul Walsh’s Gun Fury is a fairly standard western in most respects with its good guys versus bad guys and filled with all of the tropes of the genre.

Raoul Walsh’s Gun Fury is a fairly standard western in most respects with its good guys versus bad guys and filled with all of the tropes of the genre. But it has a fine cast and is helmed by one of Hollywood’s most underrated directors. What’s more, he has 3D at his disposal, and he uses it both with alacrity and effectiveness. In short, Gun Fury ends up being more than a sum of its parts.

California-bound peace-loving rancher Ben Warren (Rock Hudson) is shot and left for dead when a disenfranchised ex-Confederate, Frank Slayton (Phil Carey), kidnaps his bride-to-be Jennifer Ballard (Donna Reed) after he and his gang rob the stage of its hefty gold shipment. Once he’s revived, Ben sets out to rescue her. Along the way, he picks up Jess Burgess (Leo Gordon), a former member of Slayton’s gang who objected to the abduction of Jennifer, and Indian local Johash (Pat Hogan) who has his own score to settle with the outlaws. Together they embark on a dangerous chase to stop the wily Slayton as the gang heads toward the Mexican border and freedom.

Novelist Irving Wallace and longtime western writer Roy Huggins join forces to concoct the screenplay based on the novel Ten Against Caesar. There’s nothing particularly original in their narrative: we get the usual chases and holdups and shootouts, the continual betrayals, a jealous female embittered by her man’s taking up with another woman, and the final face-off between hero and villain. Along the way, we have to allow considerable dramatic license (the bad guys look at the shot Ben Warren and declare him dead even though he would have to be breathing to still be alive when he comes to later, Warren blindly trusts Slayton in a later maneuver even though he’s continually been proven to be a liar), but director Raoul Walsh keeps things moving at such a rapid clip (it’s basically a chase movie) and sustains the tension so well that we can skim over these lapses and just enjoy the beautiful location scenery and the inventive use of 3D. In addition to lots of forward projections, the 3D and Walsh’s use of non-anamorphic widescreen give additional expanse to the locations that afford this modest western more of an epic feel. And the mostly youthful cast are obviously enjoying getting to take center stage in their own film rather than supporting other big stars.

Rock Hudson’s law-abiding, peace-loving Ben Warren gives him a strong leading role with some flavor to it as he plays a man fed up with fighting and killing but who must put aside his principles and take up arms again to reclaim his love and battle for the life he wants. Donna Reed isn’t given much to do as the woman coveted by two men aside from finding ways to run away and being thwarted every time by her own inexperience in the wide open spaces. Phil Carey has a juicy villain’s role getting a couple of nicely-penned monologues bemoaning the lost graces of the pre-Civil War South and ignoring all entreaties by his men to give up the abducted woman (surprisingly, he has a loving woman waiting for him – Roberta Haynes’ fiery and furious Estella Morales – but he ditches her for the memories of past Southern charms which Jennifer offers). Leo Gordon also gets an excellent supporting role as Jess Burgess, right-hand man to Slayton whose disagreement with his boss over the abduction of the girl leads to their falling out. The teamwork he and Hudson’s Warren display through the central portion of the movie is one of the script’s interesting switches that actually works. Three other members of Slayton’s gang all get moments to strut their stuff, and they all do quite well: the young Lee Marvin as the reckless Blinky, Neville Brand as Blinky’s compadre Brazos, and Robert Herron’s Curly who tries to do the right thing by releasing Jennifer and pays the price for his betrayal.

The film’s original theatrical 1.85:1 aspect ratio is faithfully rendered in 1080p using the AVC (2D)/MVC (3D) codec. While sharpness and color densities in long shots sometimes appear a little lacking with some softness and color fading, there is plenty of detail and excellent color rendering in medium shots and especially close-ups. The grain structure seems to be solidly presented (those who like their images smooth will not be happy with the look of the movie), and black levels, though sometimes a bit inconsistent, are mostly quite inky and impressive. The image is certainly free from age-related artifacts like dirt and scratches. The movie has been divided into 24 chapters.

The 3D utilization is frankly superb with the expanses of the location work furthered even more by the use of the process. The main streets of the various towns which they visit look much wider in 3D, and hotel rooms and other interiors likewise seem much larger in scope through the use of this process. But the forward projections are what will delight 3D fans as a succession of objects come sailing forth from a rattlesnake strike to knife thrusts, and thrown crockery, logs, and rocks all projecting forward. A couple of point of view shots near the film’s beginning also put the viewer right into the scene, and when the shot is reversed and we see the stagecoach driver right in our faces, it’s a wonderfully composed 3D moment.

The DTS-HD Master Audio 2.0 mono sound mix is pretty much what one would expect for a film from this period. Dialogue has been professionally recorded and is always discernible, mixed with surety with the background score and the atmospheric effects. There are no problems with age-related hiss, crackle, thumps, or flutter.

Theatrical Trailer (2:10, 2D/3D HD): nice to have the trailer in both formats just like the film itself.

Six-Page Booklet: contains a color and some tinted stills, original poster art on the back cover, and film historian Julie Kirgo’s appreciation for the film and especially its director.

Twilight Time’s fantastic release of Raoul Walsh’s Gun Fury adds yet another Golden Age 3D film to avid viewer collections. There are only 3,000 copies of this Blu-ray available. Those interested in purchasing it should go to either www.twilighttimemovies.com or www.screenarchives.com to see if product is still in stock. Information about the movie can also be found via Facebook at www.facebook.com/twilighttimemovies. 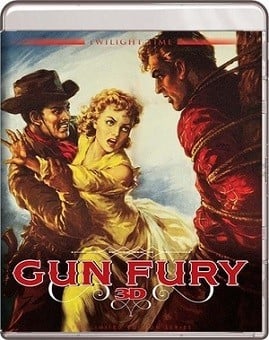