The Pirates of Blood River is a somewhat curious entry from Hammer Films which stars the inimitable Christopher Lee as an eyepatch-wearing cutthroat. It has arrived on Blu-ray with a typically excellent high-definition transfer from Sony.

Each day that you remain silent, two of you will hang – starting now. -Captain LaRoche

The Pirates of Blood River is a somewhat curious entry from Hammer Films which stars the inimitable Christopher Lee as an eyepatch-wearing cutthroat. It has arrived on Blu-ray with a typically excellent high-definition transfer from Sony.

The Pirates of Blood River is the only pirate film I can recall that doesn’t feature a pirate ship. Don’t let the opening credits fool you – the stock footage of what purports to be a pirate ship is the only glimpse of a sea-going vessel that you will see in this film. During the commentary track screenwriter Jimmy Sangster declares that he was hired to write a script for a pirate movie that would not have a ship, and that is what he delivered.

The action takes place on Devon, a fictional island in the Caribbean which was settled by persecution-fleeing Huguenots late in the 17th Century. In its early years the settlement was idyllic, but as time passed the leader, Jason Standing (Andrew Keir), has become increasingly authoritarian. As the film begins Jason’s son, Jonathon Standing (Kerwin Mathews) is seen frolicking with a buxom woman who is trapped in an unhappy marriage. Jonathon’s father gets wind of the affair and catches the two in the woods. The woman runs away and is pursued by Jason’s henchmen. She then makes the mistake of jumping into the river, which happens to be infested by piranha. This scene helps us to understand why the waterway is dubbed “Blood River.”

Jonathon is arrested and hauled before the settlement’s court, which is headed by his father. He is convicted of committing adultery and his pitiless father sentences him to the island’s penal colony, where Jonathon spends his days breaking up rocks with a sledge hammer. One day he manages to escape and loses his pursuers, but almost immediately he is discovered by a band of pirates. They take Jonathon to meet their leader, Captain LaRoche (Christopher Lee), who questions him about the settlement. LaRoche declares that he has peaceful intentions and  has been searching for a safe place of respite for his crew. He insists that Jonathon lead him to the settlement. But in fact LaRoche believes that there is treasure in the settlement, treasure which he plans to plunder.

No one is going to mistake The Pirates of Blood River for The Sea Hawk, but it is an enjoyable and action-packed adventure film. The handsome Kerwin Mathews acquits himself well in the role of Jonathon, and Christopher Lee is deliciously sinister as Captain LaRoche, a cultured pirate who would never think of saying “Aargh.” I admit that I was surprised to find that Andrew Keir is entirely convincing as Jonathon’s father, because in real life he actually was three months younger than the youthful-looking Mathews. The capable supporting cast includes Glenn Corbett and Oliver Reed. The film is directed and co-scripted by Hammer regular John Gilling (The Mummy’s Shroud, The Reptile, etc.), who keeps the story moving along at a brisk pace and with minimal implausibility.

This MegaScope presentation is properly framed at 2.35:1 and is delivered in 1080p via the AVC codec. For the most part the transfer from Sony is crisp and clean, although what appears to be a hair is visible at the top of the picture during the opening credits. It disappears at the end of the credits, however, and the rest of film is flawless.

The Pirates of Blood River was filmed in the often problematical Eastmancolor. Here the colors do not exactly jump out at you, but they are stable and appear to be accurate. Contrast is good, black levels are solid, and shadow detail is fine. The cinematography is by Arthur Grant, who was by far Hammer’s most prolific cinematographer from 1957 until his death in 1972. The exteriors were filmed at various locations in England.

The English 1.0 mono DTS HD-MA audio is fine. Dialogue is clear and understandable, and the soundtrack delivers some pleasing punch in scenes involving gunfire, swordplay, and even falling trees.

The extras on this Blu-ray disc include an audio commentary by writer Jimmy Sangster, art director Don Mingaye, and film historian Marcus Hearn. They provide some interesting insights into the film and speak at length about the history of Hammer Films.

Viewers can choose to listen to an optional isolated music and effects track. The music is composed by Gary Hughes, who wrote the music for a handful of Hammer productions.

Also included is the film’s theatrical trailer, which is in excellent condition.

As always, this Blu-ray includes an illustrated booklet with an entertaining and thoughtful essay by Twilight Time’s Julie Kirgo.

The Pirates of Blood River is lightweight entertainment, but who can resist the sight of Christopher Lee as a swashbuckling buccaneer? Fans of the genre will enjoy it, pirate ship or no. I have no inside information to offer, but if this Blu-ray does well we may one day see The Devil-Ship Pirates, Hammer’s 1964 pirate film, released in high-definition. That film co-stars Christopher Lee and Andrew Keir.

The Pirates of Blood River has been released in a limited edition of 3,000 copies, so readers who are interested in purchasing it should go to the Twilight Time website or the Screen Archives website and verify that copies are still available. 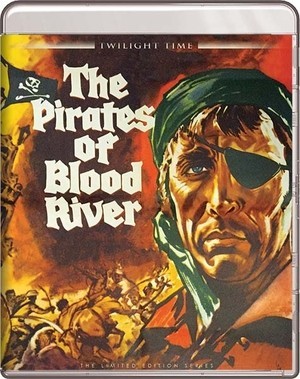