A tender, evocative small town drama with incisive character studies delivered by a clutch of outstanding actors has been somewhat miraculously extracted from Grace Metalious’ scandalous best seller in Mark Robson’s Peyton Place. One of the great Hollywood melodramas of the 1950s, Peyton Place has had a long life as a property on both the large and small screens, and this 1957 box-office winner laid the groundwork through gorgeous location shooting, meticulous casting in almost all of the key roles, and direction that makes the 2 ½ hours of the movie pass by fleetingly with never a dull moment.

Peyton Place is a small town in New England, friendly and pious on the surface but hiding a cauldron of personal problems which often bubble to the surface and threaten to tear the town apart. A group of graduating seniors in the class of 1941 are on the cusp of young adulthood and are eager to experience the world on their own terms. But parents with their own problems and hang-ups often get in the way. Valedictorian Allison MacKenzie (Diane Varsi) wants to be a writer but is blocked from experiencing the world by her demanding, sexually repressed mother Constance (Lana Turner). Allison’s best friend Selena Cross (Hope Lange) is hiding a terrible secret, being the victim of sexual abuse by her stepfather Lucas (Arthur Kennedy). Rich boy Rodney Harrington (Barry Coe) is attracted to flirtatious Betty Anderson (Terry Moore), but his martinet father (Leon Ames) thinks he can do better than the town tramp. Norman Page (Russ Tamblyn) wants to experience life and love but is under the thumb of his violently possessive mother (Erin O’Brien-Moore). All of them experience violent changes in their way of life with the coming of World War II and the revelation of some of the most closely guarded secrets in the town.

Screenwriter John Michael Hayes has magnificently boiled the essence of small town life from Grace Metalious’ book, kept only a bit of its salaciousness but instead concentrated on interpersonal relationships that go beyond the melodrama and hit at the tender and stirring souls of these characters, particularly the younger ones. It is nearly impossible to watch the film and not identify with one or more of the younger characters, striving as they all are for individual identities and a desire to find their ways in the world without interference from parents, friends, or townsfolk, especially the latter who in Peyton Place tend to mind not only their own business but everyone else’s, too. Director Mark Robson captures the seasons wonderfully throughout (gorgeous DeLuxe color cinematography by William Mellor), and he imbues real hometown spirit to everyday events in the movie with which many can identify: a prom and high school commencement exercises, Easter services, Labor Day picnics, birthday parties, swimming in the local lake. If the murder trial which climaxes the film seems a bit ill-constructed (the prosecution and the defense call witnesses alternately rather than in typical court procedure), it certainly affords several cast members the chance to emote quite passionately; little wonder that five of the movie’s nine Oscar nominations were for its performances.

Lana Turner has a real movie star lead as Constance MacKenzie struggling with frigidity and the fear of gossip and scandal, and this performance won her the only Oscar nomination in her long career. But Diane Varsi, making her screen debut as her daughter Allison, really has the leading role in the film and for a screen debut, it’s most impressive as she works her way from adolescence to young womanhood very convincingly. As her male counterpart whose sensitivity and naiveté in the ways of the real world mirrors her own, Russ Tamblyn is likewise very impressive as Norman Page especially in comparison to his character’s growth from the shy, repressed Norman in the film’s first half to the confident, expressive young man in the final scenes of the movie. Arthur Kennedy exudes dangerous instability and drunken crudity as Lucas Cross, and Hope Lange, the fifth Oscar nominee, offers a lovely, delicate read on Selena Cross hiding the secrets of her rape and subsequent pregnancy from a town all too eager to judge any impropriety. Fully worthy of an Oscar nomination that he didn’t get is Lloyd Nolan as town doctor Matthew Swain holding town secrets and watching as gossips and busybodies try to undermine the town’s roots and traditions. Terry Moore makes an alluring Betty Anderson, Leon Ames does his usual stalwart job as the prejudiced Mr. Harrington, Betty Field is a touching Nellie Cross, and Mildred Dunnock is solid and dependable as longtime teacher Miss Elsie Thornton. Three of the key male roles are acted only passably: Lee Philips as Michael Rossi, Barry Coe as Rodney Harrington, and David Nelson as Ted Carter.

The 2.35:1 Cinemascope aspect ratio is faithfully rendered in this 1080p transfer using the AVC codec. It’s a sharp and often stunning transfer with excellent color (occasionally skin tones look a bit too brown) and with the film’s grain structure admirably respected. Black levels might not always be at their deepest (the rape sequence and later murder sequence, both in the Cross shack, don’t boast the inkiest blacks), but the transfer is blissfully free of any age-related problems with dust specks or scratches. The movie has been divided into 24 chapters.

The disc offers two DTS-HD Master Audio tracks: 2.0 stereo and 5.1, and both offer excellent fidelity. I preferred the 2.0 track with more forcefully delineated directionalized dialogue and a nice sense of fullness to the sound design, but you won’t go wrong with either one. The dialogue has been recorded wonderfully and mixed with the gorgeous, evocative Franz Waxman background score and the expected atmospheric effects. There are no problems at all with any hiss or other artifacts distracting from the forceful emotional drama which is unfolding on the screen.

Audio Commentaries: there are two on the disc. Carried over from the DVD is an edited track with comments from actors Russ Tamblyn and Terry Moore, both with fine memories of making the film. But even better is film historian and Peyton Place fan Willard Carroll’s commentary track which does an excellent job detailing background on the movie’s production and stars and respecting key moments of the movie when he stops to let a key dialogue scene unfold before commenting on it.

On Location in Peyton Place (7:35, HD): Willard Carroll has traveled around Maine shooting the real-life locations used in the movie which are still in existence. You can watch his travelogue with just Frank Waxman themes on the soundtrack or with his optional audio commentary.

Six-Page Booklet: contains some color stills, original poster art on the back cover, and film historian Julie Kirgo’s incisive essay on the book and film.

Peyton Place offers involving and illuminating drama about small town life that still plays as wonderfully well today as it did some sixty years ago. There are only 3,000 copies of this Blu-ray available. Those interested in purchasing it should go to either www.twilighttimemovies.com or www.screenarchives.com to see if product is still in stock. Information about the movie can also be found via Facebook at www.facebook.com/twilighttimemovies. 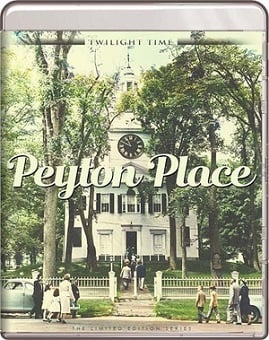