Posted on March 29, 2017 by Matt Hough
Slapstick romantic fluff made with professionalism and precision. 3 Stars

A light romantic farce that goes everywhere you expect it will and goes nowhere you expect it won’t, Charles Shyer’s Baby Boom is a pleasant time passer with just enough of a message to it that it won’t be a turn off to anyone in its audience. With a sparkling leading performance by one of the movie’s best comediennes and some picturesque location work, the film runs on a bit too long for the story and themes it’s presenting and yet never goes too far into slapstick or foolishness to lose our rooting for it.

High powered businesswoman J.C. Wiatt (Diane Keaton) finds herself at loose ends when a distant relative passes away and leaves her as the guardian of a toddler named Elizabeth (Kristina and Michelle Kennedy). Her boss Fritz Curtis (Sam Wanamaker) needs her to be available for work seven days a week and twenty-four hours a day, something that she finds impossible while caring for this infant. Demoted to a smaller account, she instead chucks her partner-track position and impulsively heads to Vermont to live a simpler and less harried lifestyle, but being a busy urbanite hasn’t prepared her for the severe winter weather or the problems of being a homeowner she finds in small town Vermont. Even the attractive local veterinarian (Sam Shepard) isn’t much compensation when your roof is caving in under the mountains of snow and the well runs dry even in the wintertime.

Director Charles Shyer and producer Nancy Meyers have written a screenplay that’s slick and obvious, filled with plenty of slapstick with diapers and rectal thermometers and baby messes once the child becomes a permanent resident of the home and the occasional serious comment on the woes of working women who want a high powered career and a family. It all goes down very smoothly with the predictable trajectory of the movie: high flying success-a series of business disappointments and demotions-a change of lifestyle with its ongoing problems-quick success and a return to a position of power. Shyer arranges his slapstick episodes thoughtfully so as to milk them for their maximum impact, but he doesn’t stretch out anything like a montage of nanny interviews or an eye-opening day in the park with fiercely driven, overachieving moms to its breaking point. And the picturesque Vermont home that seems like a dream but quickly turns into a nightmare is likewise nicely set-up but still pretty predictable (it seems to stretch credulity that someone as bright as J.C. would spend an enormous amount of money on a house and grounds without inspecting them, and she also seems to be a country girl at heart able to milk cows without effort and harvest bushels of apples single-handedly).

Diane Keaton is a master at this kind of comic performance with impeccable timing and the uncanny ability to go from amusement to sarcasm to desolation in almost the blink of an eye. The two major men in her life: the strapping vet played by Sam Shepard and investment banker played by Harold Ramis who checks out of the live-in relationship once the baby enters the picture are both acted solidly if unspectacularly. Funnier is Britt Leach as the wide-eyed local Vermont plumber who must constantly give J.C. the bad news about her house and grounds. The young James Spader plays another of his spidery corporate usurpers with great skill, and Sam Wanamaker and Pat Hingle play executives who are disappointed by the drop-off in J.C.’s professional acumen once the baby becomes a priority. Look for Chris Noth, Victoria Jackson, Paxton Whitehead, and Annie Golden in small but effective roles. And twins Kristina and Michelle Kennedy couldn’t be cuter as the title infant.

The original theatrical aspect ratio of 1.85:1 is faithfully rendered in this 1080p transfer using the AVC codec. While sharpness is the transfer’s strong suit, the grain structure inherent in the transfer has some issues resolving hue densities and consistency with some slightly blocky and patchy color issues which will be seen in larger screens and projection set-ups. It’s clean, however, lacking scratches and age-related dirt and debris. The movie has been divided into 24 chapters.

The DTS-HD Master Audio 2.0 stereo sound mix offers strongly recorded dialogue which is relegated to the center channel. Bill Conti’s playful score gets a nice spread through available channels. Atmospheric effects don’t seem to get similar treatment in the mix.

Audio Commentary: film historians Julie Kirgo and Nick Redman have one of their usual enjoyable conversations about the film and also relate events in the movie to their own individual experiences as parents.

Six-Page Booklet: contains some color stills, original poster art on the back cover, and film historian Julie Kirgo’s lucid essay on the movie.

Baby Boom is enjoyable comic fluff, perhaps a bit more perceptive about the plight of working mothers than it needed to be, but filled with ingratiating performances and arresting visual motifs. There are only 3,000 copies of this Blu-ray available. Those interested in purchasing it should go to either www.twilighttimemovies.com or www.screenarchives.com to see if product is still in stock. Information about the movie can also be found via Facebook at www.facebook.com/twilighttimemovies. 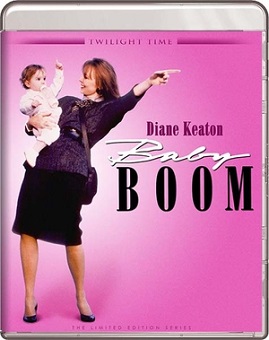