Forum List What's new Dark Style Change width
Log in Register
What's new Search
Menu
Log in
Register
Navigation
Install the app
More options
Dark Style
Close Menu
Posted on July 28, 2017 by Matt Hough
You are using an out of date browser. It may not display this or other websites correctly.
You should upgrade or use an alternative browser.
This historical fiction is really second-rate. 2 Stars

A tedious love triangle played against the backdrop of World War I being waged in Turkey, Joseph Ruben’s The Ottoman Lieutenant attempts to contrast the grand passions of romance and patriotism but comes up woefully short.

A tedious love triangle played against the backdrop of World War I being waged in Turkey, Joseph Ruben’s The Ottoman Lieutenant attempts to contrast the grand passions of romance and patriotism but comes up woefully short. The central characters in this historical fiction aren’t very interesting, and the action side of the ledger gets shortchanged, but at least the location photography is stunning to view in high definition, and even when the drama lets us down, there are plenty of pretty pictures to keep us temporarily distracted.

Strong-willed, determined Philadelphia nurse Lillie (Hera Hilmar) is being pressured by her parents to give up her medical career and find a husband. Outraged that her training and dedication means nothing to them, she leaves her comfortable home and journeys halfway around the world with her late brother’s truck loaded with medical supplies to an American field hospital in Van, Turkey, headed by the ether-addicted, gruff Dr. Woodruff (Ben Kingsley) and earnest Dr. Jude Gresham (Josh Hartnett). Her escort through Turkey is Lieutenant Ismail Veli (Michiel Huisman), an Ottoman soldier who’s also tasked by his commander (Selcuk Yontem) to serve as a spy sussing out the strength of the Armenians in the region and, once World War I begins, taking note of Russian infiltration in the area. Both young men, of course, fall in love with the plain-spoken Lillie who is drawn more to the strapping, courageous freedom fighter and is willing to do whatever it takes to keep him safe amid the chaos of war.

It’s a very bland and predictable screenplay that’s been dished up by writer Jeff Stockwell with neither the romance nor the jealousy between suitors ever in doubt. To keep from spending a fortune staging World War I battle scenes, the film borrows vintage black and white war footage from the era, but to accommodate the widescreen framing, it’s been stretched to ridiculous proportions to fill out the frame while the flat-voiced Hera Hilmar narrates the war progression and her feelings as it affects her world on the soundtrack. Director Joseph Ruben makes sure that his director of photography Daniel Aranyo captures all of the expansive and beautiful vistas of the Cappadocia area of Central Anatolia where the film exteriors were shot (and a shot inside an elaborate mosque in Istanbul is simply breathtaking), but he can’t seem to do much to enliven the truly banal romance between the two attractive but barely expressive protagonists as they cautiously proceed in their romantic pursuits (any question of problems with a Muslim man and a Christian woman making no secret of their affection for one another in war-plagued Turkey in 1915 is never addressed). Reuben has a little better success sustaining a small sense of danger with one covert mission Veli takes part in sabotaging an armory of weapons and powder in a Russian camp near the end of the movie.

To be the object of attention for all three of the above-the-title males, Hera Hilmar doesn’t express much dynamism nor generate much sexual heat with her suitors (one wonders what a more talented young actress like, say, Jennifer Lawrence would have done with this role). Both Michiel Huisman and Josh Hartnett manage to convey their passion for their work through their roles though the parts are obviously two dimensional and don’t offer either man much of a chance for in-depth characterization. Cagey Ben Kingsley through both look and manner manages to make something memorable out of his role, initially against an American woman joining the staff out in the middle of the Turkish desert but later coming to know and trust his young charge. Deniz Kilic Flak has a great couple of scene stealing moments early in the movie as the unsettling Armenian bandit who causes no end of trouble for Lillie and Ismail and later tries to sell her stolen property back to the hospital.

The film’s 2.40:1 theatrical aspect ratio is faithfully delivered in this 1080p transfer using the AVC codec. Overall, sharpness is very good throughout, and color reproduction is second-to-none with believable and appealing skin tones. Black levels vary a bit, however, and are not always at their inkiest. Contrast has been applied for a first-rate picture. The movie has been divided into 12 chapters.

The sound mix for the disc is DTS-HD Master Audio 5.1, and it’s an overall strong effort with dialogue relegated to the center channel. Geoff Zanelli’s background score seems to spend more time in the rear channels than being spread thoughtfully through all available channels, and atmospheric effects likewise are good, but the firepower of the war scenes isn’t always as cleverly placed as it might have been for maximum surround envelopment.

A historical fiction that longs for the epic romance and wartime sweep of a Dr. Zhivago but falls far from that lofty goal, The Ottoman Lieutenant plays out its predictable story in rather banal fashion. At least for those interested, the film’s technical achievements in visuals and audio are tip top and offer those compensations for its less than thrilling narrative. 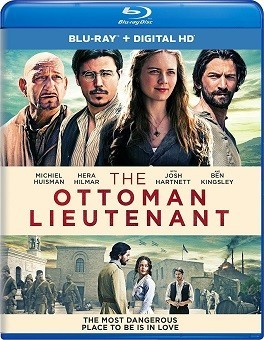