Forum List What's new Dark Style Change width
Log in Register
What's new Search
Menu
Log in
Register
Navigation
Install the app
More options
Dark Style
Close Menu
Posted on July 27, 2017 by Matt Hough
You are using an out of date browser. It may not display this or other websites correctly.
You should upgrade or use an alternative browser.
Run-of-the-mill urban story. 2.5 Stars

The magic tricks are by far the most impressive aspect of J.D. Dillard’s Sleight, an otherwise humdrum drug-fueled melodrama that’s neither smartly acted nor directed.

The magic tricks are by far the most impressive aspect of J.D. Dillard’s Sleight, an otherwise humdrum drug-fueled melodrama that’s neither smartly acted nor directed. The germ of an idea is present for a high stakes tale of magic as a means out of the drug trade (a sort of street level Now You See Me), but the film’s writer-director and his co-writer have scripted only a minimal narrative of the most banal sort in which to tell their story.

When Bo (Jacob Latimore), a gifted high school science student, suddenly becomes the sole caretaker for his younger sister Tina (Storm Reid), he must forego college and use his talent with magic to earn money to keep a roof over their heads. He impresses audiences as a street magician but to make additional money for their security, he cleverly uses his skills to peddle drugs for local drug dealer Angelo (Dulé Hill). Bo falls for Holly (Seychelle Gabriel), a community college student from an abusive home, so he decides to get out of the drug business, but his method of earning the most possible before he gives up the life for good causes Angelo to turn on Bo and threaten his family, demanding $45K for Bo to be able to buy his way out of the life. Bo must now rely on his sleight of hand and brilliant mind to save the day for himself and his loved ones.

Director J.D. Dillard has written his screenplay with Alex Theurer, but the entire magic subplot is really the film’s only true claim to uniqueness. The tricks Bo displays in his street performances are amazing (has a career in show business never occurred to him at all?) and give a lift to all of the early scenes in the film. The drug business stuff is strictly mundane, and the writing is pretty careless having Bo attempting to rip off his boss when he should know full well how ruthless Angelo can be from a previous experience when he orders a rival drug pusher’s hand to be hacked off to prove his managerial skills on his own turf in Los Angeles. The science involved in the climactic moments of the film is a bit suspect but do give those moments a vibrancy missing through much of the slow-moving picture. In fact, director Dillard slows things down even more using slow motion inexplicably as Bo wanders through a club dragging the film’s pace literally to a standstill. All of the characters present in the film are basically types rather than three dimensional people.

Headlining the film is Jacob Latimore, clean cut with a pleasing screen presence but little in the way of deep acting chops. His girl friend Holly is played by Seychelle Gabriel, another character who seems to have a fascinating backstory that goes unexplored, and Gabriel likewise looks nice without developing much strong emotion during its unveiling. Better performances are offered by veteran Dulé Hill as the quicksilver drug kingpin Angelo and Sasheer Zamata as Bo’s next-door neighbor Georgi who helps with babysitting and offers some maternal advice to the struggling young head of his household. Frank Clem plays Bo’s concerned high school science teacher who helps him prepare for his final showdown with Angelo, and Cameron Esposito appears as club owner Luna in a couple of decently acted scenes.

The film’s 2.40:1 theatrical aspect ratio is faithfully reproduced in this 1080p transfer using the AVC codec. Sharpness is exceptional throughout the presentation, and color is nicely handled as well, especially tricky since so much of the film happens at night or in areas with low lighting. Black levels during these scenes are simply gorgeous. The film has been divided into 20 chapters.

The film’s sound mix is offered in DTS-HD Master Audio 5.1, and it’s an effective one, especially for a low budget movie such as this. Dialogue is sparse throughout but is neatly directed to the center channel. The throbbing background score by Charles Scott IV and the various atmospheric effects get excellent placement in the fronts and rears and feature effective directional pans through the soundstage when appropriate.

Sleight offers rather standard thrills for its predictable narrative of a young guy working his way out of the drug trade, but this low budget indie project does look and sound terrific on this Universal Blu-ray release. 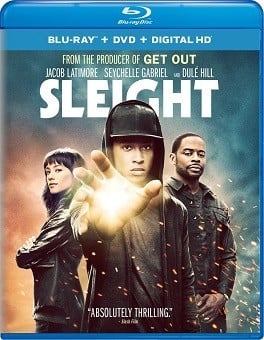