Forum List What's new Dark Style Change width
Log in Register
What's new Search
Menu
Log in
Register
Navigation
Install the app
More options
Dark Style
Close Menu
Posted on July 29, 2017 by Matt Hough
You are using an out of date browser. It may not display this or other websites correctly.
You should upgrade or use an alternative browser.
Imaginative and appealing animated adventure-fantasy 4 Stars

Sibling rivalry gets a fresh examination in Tom McGrath’s inventive and entertaining animated comedy The Boss Baby. With picture-perfect voice casting and a wildly colorful visual palette that mixes a very identifiable family situation with Walter Mitty-like fantasy sequences, The Boss Baby is mounds of fun and one of the best Dreamworks animated efforts in quite some time.

Tim Templeton (Miles Bakshi as a seven-year old, Tobey Maguire as an adult) has the perfect life with loving parents (Jimmy Kimmel, Lisa Kudrow) and a fun childhood spurred on by his active imagination. But his tidy little world begins to crumble with the family’s new addition, a baby brother for the recalcitrant Tim who isn’t in the mood to share Mom and Dad with a new arrival. And this new arrival is something unusual indeed, a baby (Alec Baldwin) who Tim learns can actually speak and is engaged in an undercover mission in which Tim is only in the way. When trying to inform on his baby brother to his parents, they misunderstand it as sibling jealousy and refuse to play along. And once Tim finds out what the Boss Baby’s mission is, he realizes he’s going to have to cooperate with him if he has any chance of recapturing the carefree life he enjoyed before the baby joined the family.

Though of course a fantasy, Michael McCullers’s screenplay surprises us by not making the adventures of Tim and Boss Baby a dream but rather as actual events occurring in real time, and his story is filled with imaginative riffs on classic films (Raiders of the Lost Ark and Moby Dick are very noticeable) and Walter Mitty-styled segues between the film’s reality and Tim’s extremely fertile imagination (adventures in outer space, in prehistoric times, on pirate ships), sometimes meshing the two within the same scene in most alluring fashion. This being Dreamworks, of course, there have to be fart and poop jokes, but they’re more controlled than usual especially with such easy targets as babies and puppies as the focus of the movie. The Boss Baby’s surprising backstory and mission enter completely unique territory for an animated film, and its freshness means we don’t really know where it’s going for much of the movie. Surprises abound making the film just as entertaining for adults as it is for their offspring, and director Tom McGrath keeps the pacing tight and movie always in motion using the toys of a kid’s world with great creativity and fashioning an adventure that should generate multiple replays.

Alec Baldwin was born to play the Boss Baby, riffing on his Emmy-winning executive role on 30 Rock, and he manages to dominate every scene in which his character inhabits, fitting for a character so named. But Miles Bakshi more than holds his own as the outraged and deeply hurt Tim, wanting to recapture the magical time when the family only numbered three instead of four (the Beatles’ “Blackbird” plays a big part in capturing Tim’s melancholy about his lost only-child status). Tobey Maguire as the older Tim and the film’s narrator is pitch perfect as are Jimmy Kimmel and Lisa Kudrow as the parents caught between their warring children. Steve Buscemi as Francis E. Francis, his parents’ employer at PuppyCo, winds up being Tim and Baby’s nemesis, a most aggressive and formidable opponent. James McGrath gets some wonderful moments as Wizzie, the wizard character on Tim’s automated clock (you’ll swear it’s Ian McKellen doing the voice), and the Baby’s entourage of neighborhood babies helping him with his mission are voiced delightfully by ViviAnn Yee (head assistant Staci), David Soren (muscle-headed henchman Jimbo), and Eric Bell Jr. (as the arguing triplets). Edie Mirman is also quite amusing as Big Boss Baby, the current CEO at BabyCorp., the production unit for babies for every contingency.

The film’s theatrical aspect ratio of 2.35:1 is faithfully rendered in this 2160p transfer using the HEVC codec. Sharpness is exemplary, naturally, and color reproduction is quite astonishing. The fluorescent colors of Tim’s flights of fantasy are eye-popping delights, enhanced by the brilliant highlights offered by judicious use of HDR, and colors in the regular sections of the movie are just as appealing and well saturated but never with any blooming. There isn’t any banding within the images either making for a reference quality picture throughout. The movie has been divided into 24 chapters.

The Dolby Atmos sound mix (decoded by my equipment to the Dolby TrueHD 7.1 core) is filled with room-filled aural experiences. Dialogue has been rooted to the center channel apart from an occasional bit of directional dialogue from another room. The soundtrack songs (including a beautiful rendition of “What the World Needs Now” over the end credits and other pop songs scattered throughout) and the Hans Zimmer-Steve Mazzaro background score get an impressive spread through the entire soundfield. Atmospheric effects are placed accurately for maximum effectiveness.

There are no bonuses on the UHD disc at all. All of the bonus features are included on the enclosed Blu-ray disc:

BabyCorp and You (3:03, HD): an orientation video made for new employees of BabyCorp.

Babies Vs. Puppies: Who Do You Love? (3:26, HD): a news report from the News Past Your Bedtime channel.

The Boss Baby and Tim’s Treasure Hunt Through Time (3:35, HD): a compilation of scenes from the film paired with new narration as Wizzie summarizes the duo’s adventures as pirates, with dinosaurs, and with aliens.

The Boss Baby’s Undercover Team (2:17, HD): the backstories on Staci, Jimbo, and the triplets.

Gallery: three dozen backgrounds and sketches of various characters from the movie.

A very enjoyable and adventure-filled fantasy of sibling conflict and bonding, The Boss Baby looks and sounds spectacular in UHD with its eye-popping colors and Dolby Atmos sound design. Recommended! 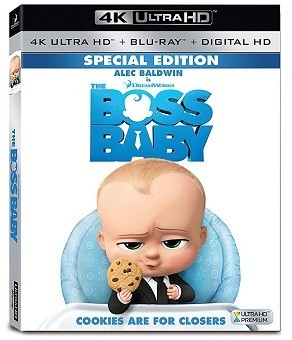