If you’re stuck in a high-rise and can’t get your new TV into the elevator, or simply don’t want to obscure your finest living room artwork, LG will hopefully shortly have a solution for consumers in such predicaments. Last week, the company unveiled its second prototype rollable and ‘hide-able’ screen at CES, but at a whopping 65 inches (the first having been just 18 inches, as announced at CES 2016).

Although there was little concrete info about the unit in Las Vegas last week, we do know that this OLED panel will neatly emerge from a stylish base, or retract, on command. The unit also includes a 4K resolution and will rise up from the base only by the amount required to fulfill whichever aspect ratio the user requires. In its first unrolled state, by only few inches, the screen acts as an information bar displaying, as examples, a photo frame, weather, news or stock market ticker roll (see picture below). Ask the screen to rise up to a second preset, and a full 21:9 (or 2.39:1) aspect ratio will be optimized for watching Cinemascope movies with no black bars. In its third and ‘highest’ position, the screen will assume a 16:9 aspect ratio. Interestingly, the image is ‘lit’ even during the roll-up or unroll process. 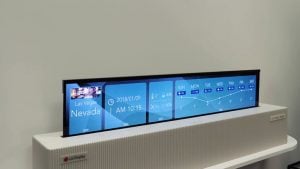 The feedback from those who attended suggests that the image on this prototype is stunning, with accurate colors, impressive peak brightness, and inky blacks. This could indeed be another technology that heralds the demise of the conventional projector if larger screens sizes are on the company’s roadmap, and if the OLED image really delivers with the performance we would hope for. LG’s Crystal Sound technology, which was also demonstrated on its CES-debuting 8K 88-inch OLED TV, apparently delivers high quality sound from the panel itself, in either a 2.1 or 3.1 audio configuration. If both the rollable and Crystal Sound technologies end up being combined on future products, we could be entering a new era of extreme low-profile, lifestyle-friendly home theater solutions.