Forum List What's new Dark Style Change width
Log in Register
What's new Search
Menu
Log in
Register
Navigation
Install the app
More options
Dark Style
Close Menu
Posted on January 3, 2018 by Martin Dew
You are using an out of date browser. It may not display this or other websites correctly.
You should upgrade or use an alternative browser.

News from LG comes in thick and fast this week as it prepares for CES, with another announcement today that it will be introducing its new ThinQ artificial intelligence (AI) and advanced image processor into its latest range of LG OLED and LG SUPER UHD TVs.

ThinQ, embedded into 2018 LG TVs, will allow customers to speak directly into their remote controls ‘…to enjoy all the convenient features of today’s advanced voice assistant technology’.  LG TVs with ThinQ will also function as home hubs, which will give users access to smart home products such as robotic vacuum cleaners, air conditioners, smart lights and smart speakers.

LG OLED and LG SUPER UHD TVs include new voice-activated control and connectivity courtesy of the company’s new ‘Natural Language Processing’ (NLP), augmented by LG’s own ‘deep learning technology’, known as DeepThinQ. Viewers will be able to streamline setup processes for gaming consoles and external soundbars, while also being able to make personal verbal requests for specific content or images through the TV’s remote control.

The Alpha 9 processor, meanwhile, will power 2018’s LG OLED TVs, allowing further picture quality improvements over earlier lines.  The SUPER UHD TVs will incorporate ‘Full-Array Local Dimming’ (FALD), a form of backlighting leading to deeper blacks, enhanced colors and ‘nuanced shadow details’, according to the company.  Alpha 9 also promises to reduce image noise with its home-grown four-step process, while simultaneously improving sharpness and making colors ‘look closer than ever to the original content’. The chip is capable of delivering the next generation of high frame rate (HFR), presumably by firmware update, to deliver 120fps (via USB when content is available), hopefully to be enjoyed by sports fans, rather than lovers of soap opera effect on theatrical feature films. 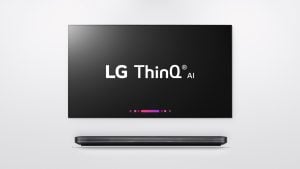 Tim Alessi, head of product marketing at LG Electronics USA says, “As a leading innovator in the TV industry, LG is pleased to introduce the LG ThinQ and Alpha 9 processor for an unrivaled viewing experience. LG is dedicated to providing cutting-edge technology that elevates user lifestyles and offers unmatched convenience. In 2018, our ‘Best TV Ever’ gets even better.”

The new OLED and SUPER UHD displays will include support for Advanced HDR by Technicolor. As yet, no prices for individual models are available, but expect delivery in March or April of this year.

So there’s little interest in 3D, but people are clamoring to have their TVs control their vacuum cleaners???

Yes, but presumably the vacuum cleaners that will come and clean up the popcorn on the carpet after the show. It all makes sense now.

I know you are just kidding, but the important big advancements for 2018 is the new video processor and the new 3D LUT. Check out Vincent's Youtube to learn more about this advancements.