Christopher Nolan’s $100 million war epic, Dunkirk, about the rescue of close to 400,00 soldiers stranded on the French beachfront arrives on 4K UHD Blu-ray in a demo-worthy transfer that replicates the digital IMAX theatrical presentation.

Much like the actual event itself, Christopher Nolan’s film Dunkirk defied the odds by grossing over $500 million at the global box office during a summer usually filled with typical tentpole blockbusters. The film contains no major stars in leading roles and it’s about a historical event that is mostly forgotten in the US. There are only a handful of directors working today that have the clout and talent to make this film, and Nolan is definitely one of them.

On May 26, 1940, nearly 400,000 Allied soldiers from Belgium, France, and England are trapped in the coastal community of Dunkirk, France, with the German army not only marching towards the city, but attacking the beachfront by plane and boat, sinking ships full of evacuated soldiers and killing platoons waiting on the beach to board incoming ships. Churchill orders the evacuation, but won’t fully commit to a complete evacuation in fear of losing more ships in his fleet, hoping to rescue at least 35,000 troops, and commandeers civilian craft to make the journey from England to Dunkirk.

Nolan, who also penned the screenplay, uses very little narrative, intercutting between three backdrops with different timelines. The Mole (or Land) takes place over a one week period, seen mostly through the eyes of Tommy (Fionn Whitehead), a British soldier who desperately wants to get home after his five platoon members are killed by German gunfire. Sea follows a father (Mark Rylance), his son Peter (Tom Glynn-Carney), and Peter’s best friend George (Barry Keoghan) over a single day as they travel in the family boat over to Dunkirk to assist in the evacuation, rescuing a lone survivor of a sunken ship (Cillian Murphy) suffering from shell shock. Finally, Air follows two Spitfire pilots (Tom Hardy, Jack Lowden) tasked with keeping the boats safe from enemy aircraft during the last hour of the evacuation. Upon first viewing, some of the intercutting may feel like continuity errors (especially when it starts cutting between night and day), but once one remembers and realizes the different compression of timelines, it makes a bit more sense.

Dunkirk is more of an experience than a standard war story, with no love story dragged in or other clichés one often associates with the genre. This is Christopher Nolan at his best.

Christopher Nolan doesn’t mince words when he says how he feels about digital filmmaking. He prefers film and practical effects. He’s also much in love with IMAX. While The Dark Knight contained 37 minutes of footage filmed in 65mm IMAX (roughly 25 percent), nearly 75% (79 minutes) of Dunkirk was filmed in the format with the remaining shot on more traditional 65mm Panavision cameras. The film alternates between 1.78:1 (IMAX) and 2.2:1 (Panavision 65mm) aspect ratios, replicating the IMAX theatrical experience. As one would expect when transferring a large film format to UHD Blu-ray and tastefully applying HDR10 to the transfer, the results are awe-inspiring. Fine detail is phenomenal throughout, particularly the textures in the sandy beaches and bubbles in the foam lapping up on the shore as well as the thread weaves in the costumes. Colors have a more natural look to them, even if they are somewhat muted to depict the drama of war and the grey coastal skies. Contrast is also excellent, providing deep blacks with exquisite shadow detail that never appears crushed. This is a demo-worthy transfer to show off that new 4K television you got over the holidays.

I have read that Nolan is not a big fan of object-based audio, which explains why Dunkirk has arrived on disc with only a 5.1 DTS-HD Master Audio track. For 5.1, this is an excellent mix, but a word of warning – it is very loud (veterans of the battle who attended the premiere complained that the real battle wasn’t this loud). At times, it can be so loud that dialogue can get drowned out, so you may want to keep the remote handy to ride the volume and/or turn on the subtitles. Surrounds are very active during key battle sequences, adding atmospheric effects during quieter passages. LFE is strong, often shaking the floorboards.

There are no extras on the 4K UHD and 1080p Blu-ray movie discs. All of the special features can be found on their own Blu-ray disc.

Digital Copy: An insert contains a code to redeem a digital copy on either Movies Anywhere or UltraViolet retailers. Redeeming the code directly on Vudu may give you access to the movie on both platforms. The code does redeem as UHD on Vudu, and most retailers have the film presented in the 2.2:1 aspect ratio only.

Nolan’s body of work has pretty much led to his crowning achievement, Dunkirk, which looks terrific on UHD, although I felt the audio mix was a bit too loud at times. The documentary on the making of the film is a nice bonus. 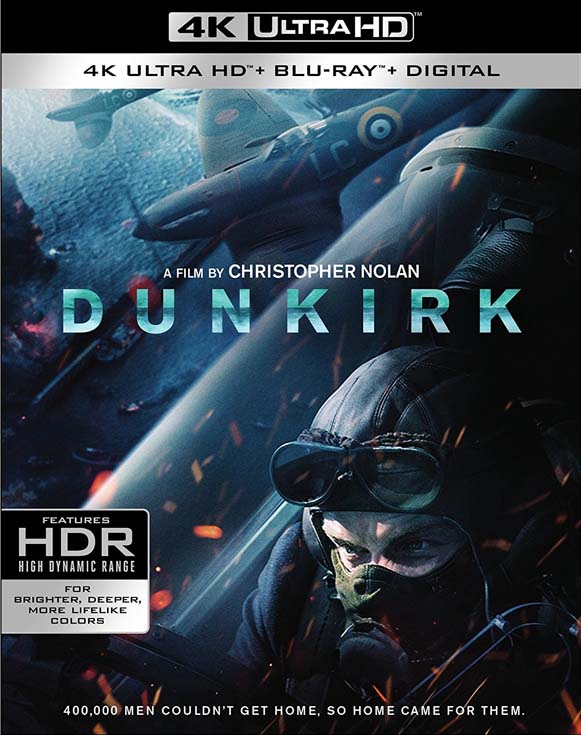