Forum List What's new Dark Style Change width
Log in Register
What's new Search
Menu
Log in
Register
Navigation
Install the app
More options
Dark Style
Close Menu
Posted on March 15, 2018 by Todd Erwin
You are using an out of date browser. It may not display this or other websites correctly.
You should upgrade or use an alternative browser.
Fun for the whole family 4 Stars

Taking place between The Empire Strikes Back and through Return of the Jedi, the Disney XD series LEGO Star Wars: The Freemaker Adventures is an often hilarious, family-friendly animated sitcom.

LEGO Star Wars: The Freemaker Adventures follows three siblings, twelve year old Rowan (Nicholas Cantu) who is strong with the Force and a quick-learning Force builder of spaceships, hot-shot pilot and middle child Zander (Eugene Byrd), and fast-talking junk trader older sister Kordi (Vanessa Lengies). The are aided by robot companion Roger (Matthew Wood) and master builder Quarrie (Corey Burton). As season two opens, the Freemakers have joined the ranks of the rebellion, repairing, maintaining and creating ships for the fleet. Emperor Palpatine (Trevor Devall) and Darth Vader (Matt Sloan) are in search of young Rowan, who they believe is in possession of the infamous Kyber Saber, a light saber powered by Kyber Crystals that is thought to have the power to split a planet in two. As we learn later in the season, Rowan tossed the Kyber Saber into a lava pit at the end of season one to prevent it from falling into the evil hands of the Empire. Since Vader is too busy overseeing construction of the second Death Star, the Emperor creates M-OC (James Urbaniak), a robot programmed to search the galaxy for Rowan. On the lead Rebel ship Home One, the Freemakers begin to build a secret weapon of their own, the Arrowhead, a ship capable of slicing through Imperial Star Destroyers, and spend much to the season looking for rare parts to build it throughout the galaxy.

I went in to the second season with a bit of a handicap – I had never heard of this series and therefore had never seen an episode prior to this review. Season One was not available on any of the streaming services I subscribe to (Netflix, Amazon Prime), nor was it available on the Disney XD app, so I was not able to get caught up before viewing this second season. It didn’t matter too much, as I was able to get involved rather quickly with the storyline and main characters. The only real handicap was the prior relationships with fringe characters. The series made me laugh, and laugh hard, and those were obviously intentional, often quoting lines from the films or making references to them. The Emperor is played as a buffoon, with Vader as his straight man, and that plays beautifully throughout the season. The Freemakers are a close family, always looking out for each other, and not afraid to have some fun at each other’s expense. The voice cast are phenomenal, not just the main players, but keep your ear open for voice-over favorites John Ratzenberger (reprising his role as Major Derlin from Empire Strikes Back), Thomas Lennon, and Richard Kind (as an Imperial officer who wants no responsibility whatsoever).

Disc One:
1. Trouble on Tibalt
2. The Tower of Alistan Nor
3. The Embersteel Blade
4. The Storms of Taul
5. Return to the Wheel
6. The Lost Crystals of Qalydon

Disc Two:
7. The Pit and the Pinnacle
8. Flight of the Arrowhead
9. A Perilous Rescue
10. Escape from Coruscant
11. Free Fall
12. Return of the Return of the Jedi

Season two of LEGO Star Wars: The Freemaker Adventures arrives on DVD only, despite being broadcast on Disney XD in 720p (and that season one received both DVD and Blu-ray releases). For what it’s worth, this DVD actually looks pretty good when upscaled to 2160p by my Sony UBP-X800 UHD Blu-ray player from 480p. Colors, while not vibrant, are still rich and consistent, with the exception of M-OC, who will often fluctuate from platinum to light grey from shot to shot (I attribute that more to the final animation than the authoring of this disc, though). Detail is adequate, taking into consideration the lower resolution. Where this disc really suffers is in contrast, particularly in blacks, which often appear dark grey.

The Dolby Digital 5.1 track is quite good, considering the low bitrate that was used, 384 kbps. The low bitrate makes the tracks sound somewhat flat at times, but otherwise, stereo and surround separation are very good, with active surrounds utilizing discrete effects during many of the space battles and light saber duels. Dialogue is clear and understandable throughout.

Bonus Adventures (480p; 22:45): These five shorts originally aired six weeks prior to the season two premiere (and also appeared on the Disney XD website and app), and then edited together as the first episode of the season. These can be viewed individually or as one episode, and are presented with Dolby Digital 2.0 stereo audio encoded at 128 kbps. Home One, Thrown Into Battle, Rowan’s Secret Adventure, Zander Freemaker – Superstar Pilot Guy, and Beware the Gamorrean Flu.

I completely adored LEGO Star Wars: The Freemaker Adventures, so much so that I may seek out the first season. Recommended to Star Wars fans everywhere.

Since it's a kids show, this is sort of a hidden gem of modern Star Wars. Thanks for the review!
A

My son loves this show and I have seen bits of many episodes. It it well done for what it is and yeah, it's pretty funny times as well.

My 2 older boys would love this show. They love the SW Lego movies!

I appreciate the review and the show is on my radar for sure!

There is a Blu-ray for season 1 of this series, but not season 2. Same for Fargo season 3. Regrettably, a fail.

Jonathan Perregaux said:
There is a Blu-ray for season 1 of this series, but not season 2. Same for Fargo season 3. Regrettably, a fail.
Click to expand...

I hate regression in all walks of life.
You must log in or register to reply here. 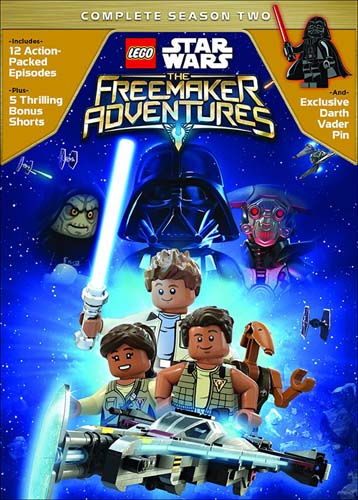