Kino released the 1961 Herman Cohen (I Was a Teenage Werewolf, I Was a Teenage Frankenstein) produced Konga (not the dance) just before Christmas.  Not that the movie has anything to do with Christmas other than it’s nuttier than a fruitcake. The major reason for watching is a gloriously over-the-top performance by Michael Gough.

From Out of Nowhere (so proclaims the trailer), notorious American producer Herman Cohen, working with American International Pictures, teamed with Nat Cohen and Stuart Levy of Anglo Amalgamated, sort of like England’s equivalent of AIP, in 1961 to unleash upon an unsuspecting world the indescribably zany Konga.

Konga opens with an ineptly staged plane crash that looks like someone lit a fire in front of the camera to simulate a crash.  In efficient movie story telling fashion we learn through a newspaper headline that after a whole year in the jungle, professor/researcher Dr. Charles Decker has survived and is headed home.

Decker, with an adorable baby chimp in tow is greeted as he exits the plane by reporters smelling hot copy.  Decker spouts a lot of incoherent scientific mumbo jumbo about living with the natives and learning medical secrets concerning the fusing of plant and animal DNA or some such foolishness from the tribal medicine man.  This leak to the press puts Decker in hot water with Dean Foster (Austin Trevor) who fears Decker’s ramblings will reflect badly on their institution.

At home we meet Decker’s faithful research assistant with benefits, Margaret (Margo Johns).  Margaret, believing that Decker somehow, some way survived has held down the fort or in this case, laboratory in Decker’s absence.  Margaret reveals that she is jealous that Decker appears to be more interested in baby Konga than her – I did say the little guy is adorable.

Decker, it appears is a dedicated man of science with little time for hanky panky and the niceties of conventional life such as marriage and home life so, he immediately dives back into his research with the disappointed, but submissive Margaret.

Quicker than you can say Jack and the Beanstalk’s magic beans, Decker has produced his growth enhancement serum and tested it on the flesh-eating plants he’s growing in his greenhouse.  Not only does the serum accelerate growth, it also makes the subject subservient to the person administering the drug.  Next step, injecting poor Konga.  I think we can see where Decker’s headed with this.

Needless to say, the megalomaniacal Decker starts bumping off anyone standing in his way on the road to glory (or sexual conquest) starting with poor Dean Foster.  A group of dimwitted Scotland yard inspectors are assigned to the case.

Towards the end of the picture the now justifiably jealous (but not of our titular friend) Margaret injects Konga, by this time a man in a very shaggy gorilla suit, with enough serum to enhance the whole Munchkin kingdom.  One of my favorite lines in the movie is delivered at this point by the police inspector, who missed his real calling as an advertising executive:

I hadn’t seen Konga since junior high school in the early 1970s.  I remembered after all these years how silly it is.  What I didn’t remember is how mean spirited it is, especially for a matinee movie.  This shouldn’t surprise me as it was produced by the same man who had recently given the world the sleazy, sordid, and hilarious Horrors of the Black Museum, which also happened to star Michael Gough.  Black Museum has one of my favorite movie murders involving spikes and a pair of binoculars.  Don’t forget to bring the kiddies!

It’s not that Decker is a brilliant scientist like Dr. Frankenstein who is blinded by his own ambition.  And he isn’t the only morally bankrupt character; so is his assistant/squeeze Margaret.  After learning that Decker is responsible for Foster’s murder does she recoil in horror?  Does she threaten to turn him in so that justice gets done?  No, she accepts this act as if it were normal; what’s a woman to do when confronted with the overwhelming sexual power of this misunderstood botanist stud?

Not only is Decker a raving lunatic/narcissist, he’s as a rapist as well.  Decker is so oblivious to societal norms, that he invites the girl whose boyfriend/rival he just murdered to dinner on the night of poor guy’s funeral.  If that isn’t bad enough, he has the soon to be discarded Margaret prepare dinner for the girl he’s trying to replace her with!  For dessert he sexually assaults the grieving girl.  That’s chutzpah!

I love ‘man in gorilla’ suit movies as much as the next guy, unless the next guy is John Landis.  There’s a lot to love in Konga including the bad acting, absurd dialogue and even more absurd special effects.  I laugh just thinking of Michael Gough squirming and screaming while in Konga’s hand – realistically filmed in the new process, SpectaMation!  The growth spurt that propels Konga literally through the roof of Decker’s house looks like a man crashing out of a dollhouse.

But in spite of all this glorious wackiness, the numero uno reason to watch Konga is the insane performance by Michael Gough.  Gough had a long career in theater, film, and television.  He was lucky in that he was able to move from dreck to quality productions throughout his career, going from movies like Trog (Cohen again) to The Go-Between, from Horror Hospital to Galileo, from Venom to The Dresser.  He later became a favorite of director Tim Burton appearing as Alfred in 80s and 90s Batman movies as well as parts in other Burton films – all the while doing stage work in shows like Breaking the Code.

Gough was a good actor who could go insane on screen quicker than a sports car going from zero to sixty.  One minute he’s an urbane English gentleman and the next minute he’s a raving, saliva propelling madman.   But the weird thing is that not all of his performances in horror films are unhinged.  He’s pretty subdued in movies like Horror of Dracula or Dr. Terror’s House of Horrors.  But cast as a lead villain and wham! you got yourself some nutty Mike.  I wonder if Gough’s agent asked movie producers if they wanted restrained or nutty Mike?  And if producers wanted nutty Mike, how much extra did it cost?  50 pounds?

Kino’s disc is advertised as new 2K master.  The movie, shot by talented British cinematographer Desmond Dickinson (Hamlet, The Rocking Horse Winner, The Browning Version, The Man Between) looks better than I’ve ever seen it, on either film, old television prints, or on video.  The prints I’ve seen in the past always tended to look faded.  The colors are much more stable on this version.

The audio is also very good. This isn’t a movie about coal miners with difficult to decipher accents.  I’m sure the producers wanted every wacky, sordid line of dialogue to be completely understood; and it is.

If you like such things, Konga is trashy fun of the highest order.  It is the kind of movie I can randomly watch certain scenes just to cheer me up.  As is often the case with movies on blu ray, Konga looks way better than any faded 16mm print seen on local television or in the auditorium of my junior high school.  If you are nostalgic about it, buy it without reservations.  My one question is how did AIP and Anglo Amalgamated get away with producing a movie about a giant ape named Konga without the rights holders of King Kong not suing?  There’s only ONE letter difference.  But to the producer’s credit, Konga sounds a lot more menacing than Bingo.

I won't have a bad word said against KONGA

I loved the film on first release when I was a teenager. In fact, I liked it so much that I went back a few days later to see it again!
Reactions: Randy Korstick

I really like this film (best seen with some friends & a glass or two of alcohol). These cheap cult horror movies can turn out to be a bit of a bore when you actually get to see them, but this is a lot of fun, with Michael Gough at his eye-rolling best as the mad doctor, plus a killer (& quite scary) gorilla & man eating plants. The bit where Konga grows very big & smashes through the house is quite effective. The only boring bit for me is right at the end when the giant Konga is walking through London, but that's only the last few minutes of the film. I was too young to see it when it opened in the UK (I must be a couple of years younger than Douglas R), but I had the comic-book version & read it to death. I owned the UK Network DVD which looks really good, but I lent it to my niece, & I don't think I'm getting it back, so I'm hoping Network releases it on Blu-ray in the UK.
Last edited: Feb 10, 2020

I looked at the blu ray on Amazon and noticed it was available on Prime Video for free so I watched it last night. I am so glad I didn’t buy the blu ray. Had I watched it as a kid, I might have a pre-disposition to like it. I found the movie to be a bore and the giant gorilla was laughable. This movie was done on the very cheap. It was so bad I skipped thru much of the movie after the first half hour. Just MHO.
Expand signature
Johnny
www.teamfurr.org
But a family cat is not replaceable like a wornout coat or a set of tires. Each new kitten becomes its own cat, and none is repeated. I am four cats old, measuring out my life in friends that have succeeded but not replaced one another.--Irving Townsend
Reactions: RBailey

That's totally understandable. With these films you really do need to see them when you were young. There's plenty of fifties & sixties films (& good ones too) that I didn't see at the time, & because of that they don't do anything for me at all now.
Reactions: Johnny Angell
You must log in or register to reply here.
Share:
Facebook Twitter Reddit Pinterest Tumblr WhatsApp Email Link 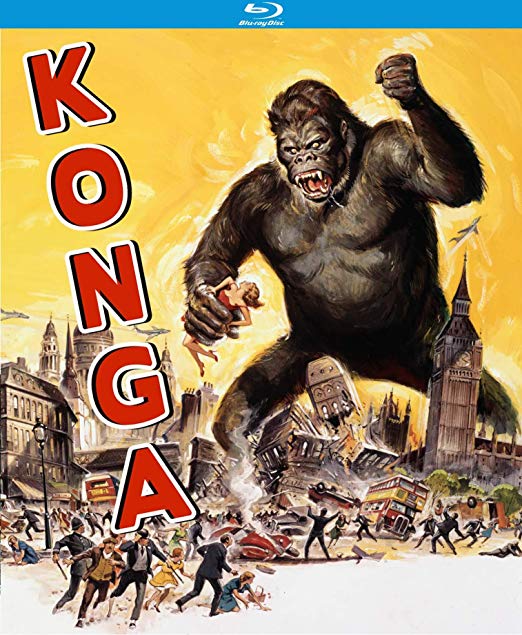