A film noir classic with two indelible star performances and a more domestically-focused story than usual for the genre, Henry Hathaway’s 1947 Kiss of Death remains a fine, imminently viewable achievement.

A film noir classic with two indelible star performances and a more domestically-focused story than usual for the genre, Henry Hathaway’s 1947 Kiss of Death remains a fine, imminently viewable achievement. As with many noirs made at Fox during the postwar period, the movie was filmed on location in New York City, and the city’s very real mood and atmosphere imbues the movie with a realistic grit that earns it a high place in the history of crime melodramas.

Already an ex-con and unable to secure work, Nick Bianco (Victor Mature) goes back to prison when he feels compelled to rob a jewelry store in order to put food on the table for his wife and two young daughters and is caught. Though Assistant District Attorney Louis D’Angelo (Brian Donlevy) offers him a deal for ratting out his fellow thieves, Nick remains silent for three years until his wife’s suicide leaves his daughters orphans, and he’s willing to do whatever the D.A. wants to be released on parole and reclaim his children from a Catholic orphanage. Part of his deal hinges on getting the goods on psychotic mob enforcer Tommy Udo (Richard Widmark), and Bianco does his part, but the state blows its case and Udo is released, eager, of course, to seek retribution on the man who ratted on him – Nick Bianco.

The taut, concise script was written by masters Ben Hecht and Charles Lederer based on a story by Eleazar Lipsky, and it’s one of those crime dramas where our protagonist is someone struggling to move from the wrong side of the law to the right side, constantly pulled back by forces beyond his control. Contrary to many noirs, there are innocent children involved in this story (the polite and quite endearing Bianco daughters) whose safety helps ratchet up the tension throughout since we know the bad guys, particularly the unbalanced Udo, have no conscience and wouldn’t hesitate to get revenge on an enemy through harming his family. The film’s most famous moment has Udo pushing an invalid mother (Mildred Dunnock) down a high flight of stairs to her death and laughing about it, but director Hathaway sets up tension-filled sequences throughout the movie from a paralyzing ride down an elevator where the jewel thieves desperate to escape are at the mercy of departing passengers on several floors before reaching the lobby to Bianco’s walk around a darkened house in the middle of the night as he’s certain Udo is around every corner waiting for him. The climactic street face-off between the adversaries is something of an anticlimax with an unbelievably sunny ending for film noir, but Hathaway milks the suspense before that happens with a great mano-a-mano duel with words between the two enemies and an overall mood of helplessness that effectively traverses the entire enterprise.

Victor Mature may never have had much regard for his acting skills, but this postwar period was the most accomplished of his career with superlative back-to-back performances as Doc Holliday in My Darling Clementine and Frank Bianco in Kiss of Death. His face and body language convey much vulnerability throughout the film, and the feelings he has for his new wife (Coleen Gray effective as his kids’ former baby-sitter Nettie) and children seem genuine and altogether admirable. Richard Widmark, of course, walked away with all of the reviews as the psychotic Tommy Udo. With his weasely grin, chortling cackle, and wild eyes, his Udo is unpredictably violent, and it’s no surprise this film debut earned him an Oscar nomination (in what would turn out to be his only Oscar recognition in his long and varied career). Brian Donlevy does yeoman work as the assistant district attorney, but the film several times emphasizes the law’s frequent impotence in the face of clever career criminals, and Donlevy’s world-weary voice and behavior often punctuate that notion. Taylor Holmes is creepy good as the mob lawyer Earl Howser, all unctuous smiles and insincerity, and Howard Smith as the responsible, understanding warden is a fresh take on what is usually portrayed as someone slimy and unmentionable. Besides Mildred Dunnock’s tiny role as the pitiful victim of Udo’s wrath, Karl Malden has a small early role as police sergeant William Cullen. Millard Mitchell is also fine as the D.A.’s less accommodating assistant.

The film’s 1.37:1 original theatrical aspect ratio is presented in 1080p resolution using the AVC codec. Sharpness is excellent in this transfer as facial features and hair textures are superbly represented. The grayscale is very good with rich black levels (if not always the deepest on record) and pure whites, and contrast is consistent throughout. A bit of moiré is glimpsed in a shirt with tight thin stripes, but otherwise, no age-related artifacts mar the very good picture quality offered here. The movie has been divided into 24 chapters.

The DTS-HD Master Audio 2.0 sound mix is mono in nature but gets sent to all of the front channels. The dialogue is always easy to discern, and David Buttolph’s very spare background score and the ambient effects are combined with surety. There are on occasion, however, several instances where muffled crackle and pops can be heard particularly in the film’s second half, not completely eliminated by Fox engineers when mastering the soundtrack for Blu-ray disc.

Audio Commentaries: two are available and both are well worth hearing. Carried over from the Fox DVD release is the commentary by film noir experts James Ursini and Alain Silver who do very nicely with their analysis of the movie proper. Historians Julie Kirgo and Nick Redman give more of an overview of the film noir genre and discuss how this film both fits it and forges its own path.

Six-Page Booklet: contains some black and white stills, original poster art on the back cover, and film historian Julie Kirgo’s celebration of the career of Richard Widmark.

An imminently watchable film noir and far superior to the Nicholas Cage-starring remake done some fifty years later, Kiss of Death ranks highly among noir aficionados and for good reason. There are only 3,000 copies of this Blu-ray available. Those interested in purchasing it should go to either www.twilighttimemovies.com or www.screenarchives.com to see if product is still in stock. Information about the movie can also be found via Facebook at www.facebook.com/twilighttimemovies.

Good movie. Strong pq. Perceptive essay as always by Julie Kirgo. As Matt H writes in his review: "Richard Widmark, of course, walked away with all of the reviews as the psychotic Tommy Udo. With his weasely grin, chortling cackle, and wild eyes, his Udo is unpredictably violent, and it’s no surprise this film debut earned him an Oscar nomination (in what would turn out to be his only Oscar recognition in his long and varied career)." 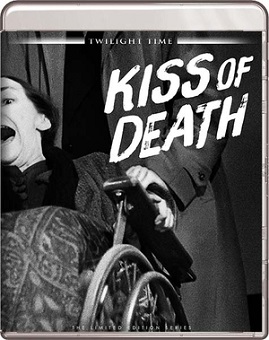