A rather pointless romantic fantasia on Howard Hughes 2.5 Stars

After more than a decade and a half away from the cameras, Warren Beatty returns to produce, direct, write, and star in Rules Don’t Apply, a bizarre and uneven fantasia on the life of unconventional billionaire Howard Hughes right before his eccentricities removed him from interacting with the world.

After more than a decade and a half away from the cameras, Warren Beatty returns to produce, direct, write, and star in Rules Don’t Apply, a bizarre and uneven fantasia on the life of unconventional billionaire Howard Hughes right before his eccentricities removed him from interacting with the world. As if we need another view of Mr. Hughes after the glories of The Aviator and Melvin and Howard, Rules Don’t Apply turns his life into somewhat of a historical fiction with the intrusion of some new characters into his world featuring a secondary love story that is really uninteresting and unsatisfying. It’s no wonder that the movie despite some early expectations was dead on arrival at the box-office.

It’s 1958 in Hollywood, and Orange Blossom Queen Marla Mabrey (Lily Collins) has been brought to Hollywood by Howard Hughes (Warren Beatty) to make a screen test for an upcoming production of Stella Starlight. She’s but one of a number of young girls with their dreams of movie glory that Hughes has brought to Tinsel Town and ensconced in various home properties around Los Angeles, paying them $400 a week to be at his beckon call when he deigns to see them. Most of the young women are happy to take the money and live in luxury, but Lily has real dreams of making it in show business, if not as an actress then as a songwriter, and her driver Frank Forbes (Alden Ehrenreich) constantly hears of her hopes and ambitions. He shares with Lily his own dreams of making it in real estate development with Hughes’ help, and before long they are breaking some of the stringent rules that Hughes demands of his starlets and drivers by beginning to fall in love.

Beatty wrote the screenplay in collaboration with Oscar-winner Bo Goldman on the story, and what he’s done is taken several famous events from the life of Howard Hughes and mangled them into a story that scans about five years from the late 1950s to 1964 even though many of the factual events he’s drawn on couldn’t have happened in those years (Hughes operating out of the RKO lot which he had actually long since sold off, appearing before Congress and flying the Spruce Goose: both of which happened more than a decade earlier). True, Beatty’s begun the film with a famous Hughes epithet: “Never check an interesting fact,” and it’s clear that the master auteur has taken that statement on face value to juxtapose these events in Hughes’ life to form the background to the story he wants to tell of these two deeply religious young people whose lives move away from blind obedience to their faith in learning to cope with the real world into which they’ve been thrust. But neither Lily nor Frank emerges as a very interesting character even though they’re both good people, and the narrative that Beatty has come up with for them is never engaging or involving. Are we supposed to get a big kick out of Lily’s drinking an entire bottle of champagne for her first drink of alcohol (though the most she ever gets is tipsy and never gets physically ill from her imbibing, a distinct impossibility for someone who hadn’t ever tasted alcohol before) or Hughes’ infatuation with ice cream and his unending changes of a single favorite flavor which creates havoc among his staff who must scurry to find it when the master calls for it? Yes, he captures Hughes’ escalating instability and paranoia in the latter stages of the film, but it’s not particularly edifying entertainment, and it’s not presented nearly as compellingly as Martin Scorsese did it in The Aviator. Cinematographer Caleb Deschanel has crafted a warm and inviting looking Hollywood right at the end of the Golden Age, and Beatty keeps his camera shots languid and lengthy appropriate to the period, not opting for current methods of quick cutting and jerky camerawork which would have seemed completely anachronistic to the project, but that also keeps one’s attention wandering somewhat as the film lopes its way to an ambiguous conclusion.

Warren Beatty’s Hughes is more pathetic and needy in certain sequences than he’s ever been portrayed before, but otherwise, this genial performance does not seem much like the Howard Hughes of legend. Alden Ehrenreich and Lily Collins are both attractive young performers who are at the mercy of the underdeveloped and rather unexciting characters they’re playing. Beatty has hired a monster cast of hugely talented friends and associates who are basically wasted in undemanding or superfluous roles: Annette Bening as Lily’s stern mother, Taissa Farmiga as Frank’s left-behind fiancé, Ed Harris and Amy Madigan as Farmiga’s parents, Martin Sheen as Hughes’ legal representative, Candice Bergen as Hughes’ executive assistant, and Alec Baldwin as Hughes’ business representative. Only Matthew Broderick as another Hughes driver who like Frank rises within Hughes’ private enclave adds enough offbeat humor to give his part some substantive merit.

The film’s original theatrical aspect ratio of 1.85:1 is faithfully rendered in this 1080p transfer using the AVC codec. Sharpness is outstanding allowing us to bask in the glories of the gorgeous cinematography and the period wardrobe and furnishings. Color is beautifully rich but always under control with lifelike skin tones. Contrast has been consistently applied to produce such a stunning image, and black levels are rich and deep with excellent shadow detail (important since Hughes often takes meetings in shadowy-lit rooms). The movie has been divided into 24 chapters.

The DTS-HD Master Audio 5.1 sound mix is also outstanding. Dialogue has been professionally recorded and has been placed in the center channel. The music score has been enhanced by a wide range of classic songs which get masterful treatment in the mix: “Hooray for Hollywood,” “Rockin’ Robin,” “Take Five,” “Beyond the Sea.” Ambient effects likewise get channeled to the fronts and rears as the need arises and makes for an enveloping sound experience.

“The Rules Don’t Apply” Music Video (2:19, HD): Lily Collins performs the song she sings in the movie against a montage of clips from the film.

Picture Gallery (HD): thirty-eight color images which may be advanced manually or automatically.

Reference quality video and audio can’t really make up for the tepid and uninvolving storytelling going on in Warren Beatty’s Rules Don’t Apply. It’s a beautiful looking and sounding film, and those curious about Howard Hughes may find some interest in the events as they unfold even if they are years removed from the times in which many of them likely occurred.

I enjoyed this much more than I expected when I saw this on the big screen. I particularly basked on the glorious cinematography by Deschanel which I thought should have received Academy recognition. Those shadows...

bujaki said:
I enjoyed this much more than I expected when I saw this on the big screen.
Click to expand...

Yeah, I'm kind of enamored with the era so maybe it was easy sell to me but I liked the movie quite a bit.

TravisR said:
Yeah, I'm kind of enamored with the era so maybe it was easy sell to me but I liked the movie quite a bit.
Click to expand...

And the period details were dead on, which I also enjoyed.
Reactions: TravisR

I'm not expecting much, but I'm still looking forward to seeing it.

I think the mistake with the release was giving it such an instant, wide opening. Whether or not anyone wants to admit it, Beatty's star power isn't what it once was - no one's is, the big opening weekend dollars come from franchises these days. I think if they had started with a limited release and built it out from there, it might not have been a total flop. As it was, I wanted to see it in theaters but it was gone in the blink of an eye - and coming out in a crowded holiday season, I gave priority to the big IMAX 3D spectacles that were playing that week. It seemed harder to justify missing one of those that I really wanted to see in favor of a $16 2D ticket. I wish they had released this better so I could have had more of a chance in an extended limited release. But I am looking forward to seeing it now that it's available at home.

Josh Steinberg said:
I think the mistake with the release was giving it such an instant, wide opening. Whether or not anyone wants to admit it, Beatty's star power isn't what it once was - no one's is, the big opening weekend dollars come from franchises these days. I think if they had started with a limited release and built it out from there, it might not have been a total flop.
Click to expand...

I saw it on Sunday of its opening weekend so it was already known as a big flop and I figured there'd be 2 or 3 other people in my theater but it was fairly crowded. Obviously, that screening was an anomaly.
Reactions: Josh Steinberg
P

Any of Warren Beatty's works will always command my attentions.
And even if I leave the experience of "Rules Don't Apply" with the same feelings of Matt Hough, I am certain that there will be enough there for me to be glad that Warren Beatty has returned to work.
I like his ideas, visions and concepts; and I'm certain he was fully aware of what he was up against with the two prior Hughes film of "The Aviator" and "Melvin and Howard".
John Reed and Howard Hughes were the lives that Mr. Beatty spent so years contemplating and envisioning for the screen. Would many agree that this Warren Beatty film about Howard Hughes; after an 18 year absence; was anticipated by us all as being this filmmakers Magnus Opus? Had these anticipations grown higher and higher, with every passing year? I know that mine had. But it's still not going to be enough for me to turn my back on one of our great auteurs. Hopefully, there will be a few more films ahead.
And so to that, I say, "Welcome back Warren Beatty".
You must log in or register to reply here.
Share:
Facebook Twitter Reddit Pinterest Tumblr WhatsApp Email Link 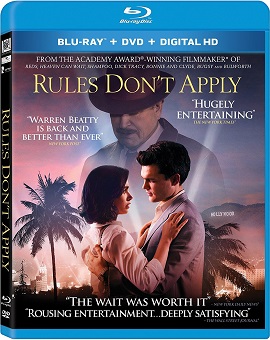