Mel Gibson returns to the director’s chair after a 10 year hiatus with Hacksaw Ridge, and what a welcome return it is. Set during World War II, it tells the story of Desmond Dos, a conscientious objector who managed to save 75 men without firing a weapon during one of the bloodiest battles in the Pacific.

After two violent mishaps occur in his life, Desmond Dos (Andrew Garfield) vows to never pick up a gun, citing one of the Ten Commandments, “Thou shalt not kill,” and his faith as a Seventh Day Adventist. As he grows up, he takes a liking to medicine, falling in love with a nurse at the local hospital, Dorothy Schutte (Teresa Palmer). When World War II breaks out, and his brother has enlisted, Desmond feels it is his duty to also enlist, believing that if he enlists as a Medic, then he won’t have to carry a gun. This upsets his alcoholic father (Hugo Weaving) who is suffering from PTSD from being the sole survivor of his friends that went off to fight in World War I. As Desmond arrives at boot camp, he finds that his commanding officers, Captain Glover (Sam Worthington) and Sgt. Howell (Vince Vaughn), aren’t too keen on having a conscientious objector in their squad, and try everything, including a threat of court martial and dishonorable discharge, to get him to quit. In an act of pure compassion, Desmond’s father obtains a letter from his former commanding officer that allows Desmond to forego weapons training and join the squad in the Pacific as a Medic. After a bloody and failed attack on Hacksaw Ridge on Okinawa, Desmond becomes trapped on the front lines with wounded soldiers, yet finds a way to get the wounded to safety.

Hacksaw Ridge seems like an unbelievable tale, if it weren’t for the fact that Desmond Dos was a real person, and he did manage to save 75 men at the battle of Hacksaw Ridge without ever firing a weapon. It also helps that director Mel Gibson and screenwriters Robert Schenkkan and Andrew Knight take their time telling the early life of Desmond Dos before sending him off to war, making it a film more about the man than his religion (although faith plays a key role in his life), and not over-glorifying each life he saved on the battlefield. The film is also full of exceptional performances, especially Hugo Weaving as the father, Rachel Griffiths as Desmond’s mother, Dorothy Schutte as the future Mrs. Dos, and Sam Worthington as the commander that thought Desmond would be his first casualty. The real surprise, though, is Vince Vaughn as the squad’s sergeant. Known primarily for comedic roles, Vaughn is simply superb as the hard as nails drill sergeant, one of his best dramatic roles to date. Andrew Garfield is also quite good, although I felt his boyish smile and charm were overdone, just as they were in The Amazing Spider-Man films.

Hacksaw Ridge was captured at 3.4K resolution on Arri Alexa and Red Epic Dragon cameras, and completed as a 2K digital intermediate. This 2160p transfer, upscaled and graded using high dynamic range, exhibits a much higher level of detail, as expected, with more defined textures in clothing and backgrounds, but also allows for a greater sense of depth, allowing the viewer to see quite clearly the many layers of smoke behind the actor during the battle sequences as the end of the film, or the text on the gravestones when his father is drinking to his fallen buddies. Contrast is also improved upon, providing explosions whose clouds of smoke continue to glow as the fire subsides, and blacks that provide deep shadow details. Colors are much warmer and more natural, and reds are much more distinct and solid. This is another exceptional UHD transfer from Lionsgate.

Kevin O’Connell, Andy Wright, Robert Mackenzie, and Peter Grace certainly deserved the Oscar they won for their work on the sound editing for Hacksaw Ridge, available here on both UHD and Blu-ray in an exceptional Dolby Atmos mix that plays back with almost as much immersion in a 5.1.2 configuration and Dolby Pro-logic IIz enabled for those without Atmos, like myself. Every bullet, mortar shell, and yes, even a chirping bird during the earlier, quieter passages in the film, is expertly placed with precision within the listening area. The score by Rupert Gregson-Williams gives a nice emotional lift to the film, and is spread evenly throughout the channels of speakers. Bass response is also exceptional, so much so that one may want to turn the subwoofer off if watching late at night. Through all of this, dialogue is still strong and never gets lost or drowned out in the mix.

As with most of Lionsgate’s recent UHD releases, all of the special features have been included on both the UHD and Blu-ray editions.

The Soul of War: Making “Hacksaw Ridge” (1080p; 69:45): A fairly in-depth look at the making of the film, including interviews with Director Mel Gibson (who appears with three distinct looks, including his scary mountain man look), producer Bill Mechanic, writers Robert Schenkkan and Andrew Knight, the son of Desmond Dos, and members of the cast.

Veterans Day Greeting with Mel Gibson (1080p; 1:02): Gibson discusses the importance of Veterans Day, while plugging his new movie at the same time. This piece feels like it was part of an in-theater pre-show.

Mel Gibson, after a long period where he appeared to have been banished from Hollywood, has certainly redeemed himself by showing he is still a great storyteller with Hacksaw Ridge. Video and audio are exemplary on this UHD release. Recommended. 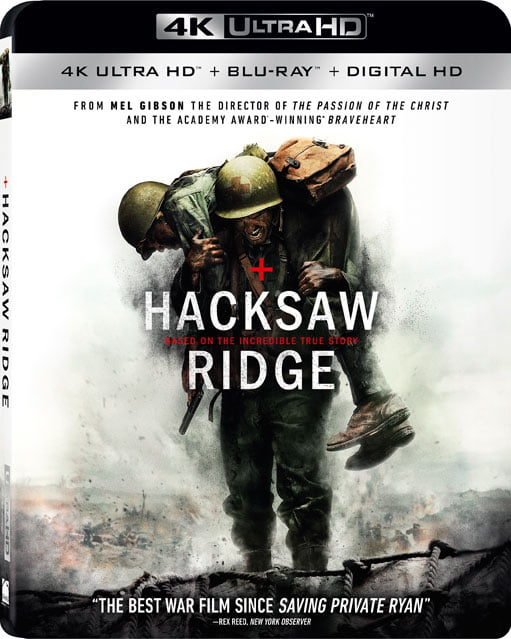