Forum List What's new Dark Style Change width
Log in Register
What's new Search
Menu
Log in
Register
Navigation
Install the app
More options
Dark Style
Close Menu
Posted on January 22, 2019 by Martin Dew
You are using an out of date browser. It may not display this or other websites correctly.
You should upgrade or use an alternative browser.
A new interactive guide has analyzed each official Bond film to reveal how much vehicle damage 007 has really caused. The ‘Carnage Calculator’ dissects the damage inflicted on every vehicle Bond has driven and uses insurance categories to calculate the total cost, and accordingly it has estimated that Roger Moore is the most destructive Bond, completely destroying five of his cars across five films. Meanwhile, Daniel Craig has caused the most expensive vehicle damage, with a whopping £3,133,590 bill (US $4,043,421 at today’s exchange rate) across four films.

Have you ever wondered how many vehicles 007 has ruined across all 24 official Bond films, and the true cost of carnage? The results will apparently leave you both shaken and stirred.
The Carnage Calculator, created by car leasing specialist AMT, collates data from every film in the franchise, revealing how much damage the superspy has really caused. Users can view a visualisation of each Bond vehicle as well as a description of the scene and car damage. The carnage calculator totals up the financial impact of Bond’s devastating driving. 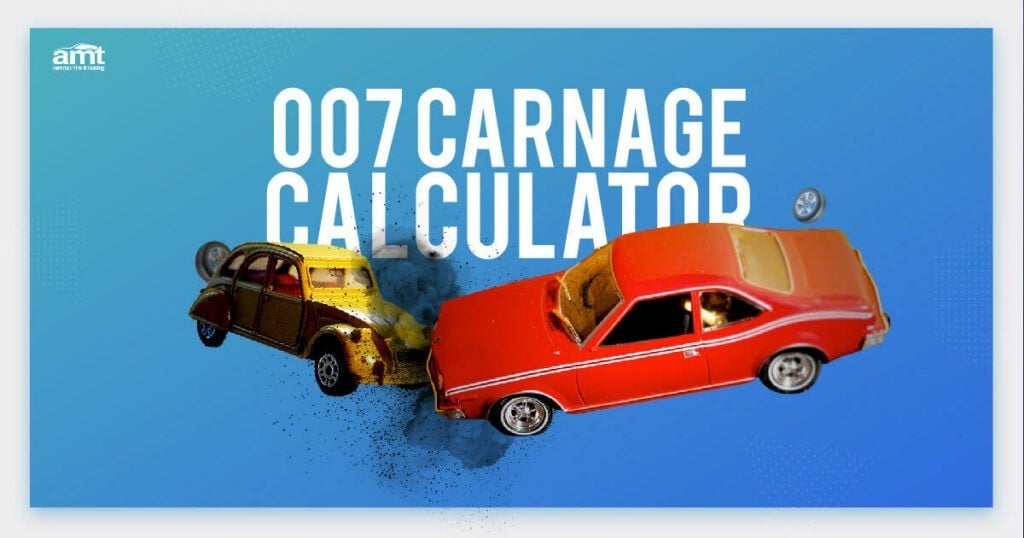 To work out the cost of every vehicle, the new price of each at the time of the film has been adjusted for inflation. The damage has then been calculated by classifying it into the UK A,B,S and N insurance categories, and priced at 100%, 80%, 40% or 20% of the car’s value respectively. The spy damages at least one car he drives in an astonishing 18 films, with 23 different vehicles feeling the brunt of 007’s reckless driving. Of all the Bonds, Sean Connery is the most careful 007 on the road, keeping his cars intact in From Russia with Love, Thunderball and You Only Live Twice.

Bond damages a shocking eight Aston Martins in all 18 films, with Daniel Craig writing off three models alone. A total of 11 different vehicles are completely written off by Bond, including the Rolls Royce Silver Cloud II and the infamous AEC Regent bus. Daniel Craig’s Aston Martin DB10 is the most expensive vehicle destroyed in the film franchise. Only ten models were created exclusively for use in Spectre, each carrying a hefty price tag of £2,400,000 (US $3,096,835).

Films featured in the piece include:

To find out whether Bond will Drive Another Day or have his Licence to Kill revoked, visit: https://www.amtleasing.co.uk/james-bond-damages.

This site was apparently launched following the announcement that Aston Martin is building 25 replicas of Bond’s iconic Aston Martin DB5, made famous in Goldfinger. Wouldn’t mind one of those.
Post Views: 11,083

Roger had the most films and quite a few car Chase scenes too.

I thought the same thing but I guess they aren't car chase movies so there's only a few car wrecks in each one.

I'd like to see a similar analysis on the property damage assessments in superhero movies--but that study could take Wonder Woman's lifetime...

“I see you’ve managed to put the Lotus back together.”

And the costs were just the cars. I’m sure all the fancy gadgets that went down with the cars were astronomical.
You must log in or register to reply here.