Forum List What's new Dark Style Change width
Log in Register
What's new Search
Menu
Log in
Register
Navigation
Install the app
More options
Dark Style
Close Menu
Posted on January 22, 2019 by t1g3r5fan
You are using an out of date browser. It may not display this or other websites correctly.
You should upgrade or use an alternative browser.
Historical drama of famed romance debuts on Blu 3.5 Stars

For much of the Golden Age of Hollywood, producer Hal B. Wallis was consistently churning out movies that were high on entertainment value as well as production quality; that distinctive trait earned him 19 Oscar nominations (winning his only one for the immortal classic Casablanca) and two Irving Thalberg Memorial Awards over the years. Anne of the Thousand Days, his first production at Universal after spending many years at Paramount Pictures, is a prime example of that touch, melding the real-life story of the royal romance between Henry VIII and Anne Boleyn with some of that old Hollywood black magic called entertainment. Twilight Time gives the movie its Blu-ray debut courtesy of their licensing agreement with Universal.

In 1536 England, Henry VIII (Richard Burton) has learned of his ex-wife Anne Boleyn’s (Genevieve Bujold) conviction on the charges of adultery. While he mulls whether or not to sign the execution warrant, he remembers how they first met and how their romance shook a nation to its core. During those thousand days, a future queen (Elizabeth I) was born (much to Henry’s dismay), two of the king’s closest advisers are either ruined (Cardinal Wolsey) or executed (Sir Thomas More), and the lovers themselves spar in a war of wills that leaves only one of them still standing at the end.

The romance between Henry VIII and Anne Boleyn has been the subject of countless books, movies, and TV shows over the years. The source material for this film – a play written in blank verse by Maxwell Anderson – bowed 20 years prior on Broadway and received great acclaim; however, film adaptation was impossible since several of the subjects covered in the play – adultery, incest and illegitimacy – were essentially verboten by the Production Code at the time. After the Production Code was finally broken, Hal Wallis seized upon the opportunity and created a lavish production that recreated 16th Century England beautifully – one of the locations used in the film was actually the childhood home of Anne Boleyn (Hever Castle); the film itself was nominated for ten Oscars including Best Picture and was the subject of a expensive campaign spearheaded by Universal that included champagne and filet mignon being served to Academy voters after each screening, which resulted in only one Oscar win – for Best Costume Design.

Whistles and bells from promotion aside, this is a nicely done telling of the story, mixing in some accurate historical details of Henry and Anne’s romance while taking some creative liberty with other details – the meeting between them in the Tower of London being one example, the only blank verse retained from Anderson’s play. As director, Charles Jarrott manages to hold our intrigue for the film’s running time while glossing over some of the more plodding moments in the plot. However, the real reason to see the movie is strong performances by three of the film’s top performers, each of whom received Oscar nods for their work. Richard Burton is a very wily Henry VIII, very capably holding his own compared to Charles Laughton’s iconic (and Oscar-winning) portrayal in The Private Life of Henry VIII (1933) as well as Robert Shaw’s fiery take in A Man for All Seasons (1966). Genevieve Bujold, chosen by Wallis after seeing her in Isabel (1968), rose to international stardom with her smart and feisty interpretation of Anne Boleyn; it still remains the only on-screen portrayal of Anne to be recognized with an Oscar nomination. As Cardinal Wolsey, Anthony Quayle makes for a comprehensive, if not entirely tragic figure; it would be the only Oscar nod of his diverse and distinguished career. Other noteworthy cast members and performances include Irene Papas as Catherine of Aragon (Henry VIII’s first wife), Michael Hordern as Thomas Boleyn (Anne’s father), John Colicos as Thomas Cromwell, Peter Jeffrey as Thomas Howard, the 3rd Duke of Norfolk (Anne’s uncle), and William Squire as the ill-fated Sir Thomas More.

The original 2:35:1 aspect ratio is intact in this very strong transfer. Film grain is sturdy and organic while the color palette is vivid with fine details rendered quite well; there’s minimal instances of age related artifacts like dirt, dust, speckling, etc. All in all, it’s an improvement over the previous Universal DVD, giving Arthur Ibbetson’s cinematography the treatment it truly deserves.

Presented on a 2.0 DTS-HD Master Audio track, the original stereo soundtrack is rendered faithfully with strong dialogue and effects to go along with great fidelity given Georges Delerue’s rich (and period accurate) score; very minimal instances of crackling, popping or hissing are present. Again, a marked improvement on the Universal DVD.

A run-through of the Twilight Time library is also included along with a booklet containing an always informative and insightful essay by Julie Kirgo.

While it garnered mixed reactions from critics and audiences despite its ten Oscar nominations, Anne of the Thousand Days is still an engrossing account of the famed and ill-fated romances in world history. Twilight Time has done a great job in debuting this movie on Blu-ray with solid visual and audio presentation. Definitely worth upgrading from the Universal DVD, but since it’s limited to just 3000 copies, stock won’t last forever, just like Henry and Anne’s romance.

Final note: this review is dedicated to the memory of Twilight Time co-founder Nick Redman, who passed away at the time this review was being written.

I’d love to see this film again. I looked a Amazon and the only blu rsay I can find is a Spanish release.

Johnny Angell said:
I’d love to see this film again. I looked a Amazon and the only blu rsay I can find is a Spanish release.
Click to expand...

Probably because it's a Twilight Time release, available - for now - from Twilight Tome or Screen Archives.

Dave B Ferris said:
Probably because it's a Twilight Time release, available - for now - from Twilight Tome or Screen Archives.
Click to expand...

Precisely, which is why you don't see an Amazon link at the bottom of the review as compared to other reviews.

Johnny Angell said:
I’d love to see this film again. I looked a Amazon and the only blu rsay I can find is a Spanish release.
Click to expand...

All Twilight Time releases are exclusive to Twilight Time's official website and Screen Archives Entertainment. Any sales elsewhere (like on Amazon) are unauthorized sales from third party sellers looking to make a profit by scalping the limited editions.

Here are the links for purchasing:
https://www.twilighttimemovies.com/anne-of-the-thousand-days-blu-ray/

Rest assured that both are reputable retailers!

God bless Twilight Time co-founder Nick Redman. I love the isolated score on this film. It is beautiful -- especially Anne's monologue where she's waiting at the gallows and explains the title of the movie.

Give me Mary, Queen of Scots!

I'm watching this rather melancholy but lavish movie now. Strong performances all around. The picture quality seems excellent so far.

I remember watching this in the theater when I was a kid and at least once more many years later, but I still haven't gotten to the Twilight Time disc which has been sitting on my to be watched shelf for awhile. It made quite an impression when I first saw it.

Yeah, this movie is heavy duty stuff imho, even if it's rated PG or whatever. Richard Burton really shows the bad sides of Henry VIII in a compelling way, demonstrating his capacity for self-delusion. The "show trial" almost reminded me of the Moscow show trials under Stalin, or the stuff that happens in Orwell's 1984.
You must log in or register to reply here. 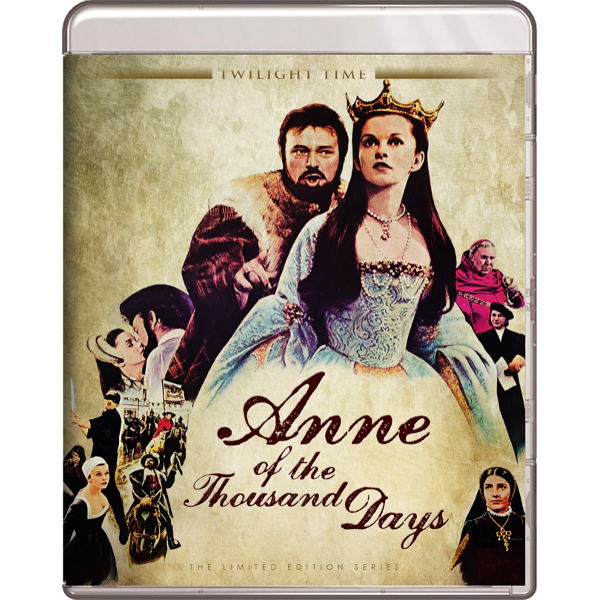