Roland Emmerich’s science fiction disaster epic Independence Day arrives on 4K UHD in what could be one of the best film to 4K transfers yet for the new format. The set also includes the excellent 2-disc 20th Anniversary Edition on Blu-ray.

Aliens have arrived, parking their mothership into Earth’s orbit and dispatching their ships over most of the planet’s major cities, causing disruptions in satellite communications. Mankind tries to make contact by means of peaceful methods, resulting in fatalities. It turns out, the aliens are here to exterminate us, starting with the destruction of New York, Los Angeles, and Washington, D.C.  Scientist turned cable television engineer David Levinson (Jeff Goldblum) catches on to the alien’s plan by deciphering the burst of code causing the disruptions, and manages to warn his ex-wife, Constance Spano (Margaret Colin), who happens to be the Press Secretary to President Whitmore (Bill Pullman). The President and most of his staff escape minutes before the White House is destroyed, fleeing to Area 51, where they regroup to launch a worldwide attack on July 4th, Independence Day.

Roland Emmerich and Dean Devlin had scored a modest box office success with Stargate, and during the press junket came up with the idea for Independence Day when they were asked if they believe in extra-terrestrials. The script was completed in four weeks, structuring it as a 1970s style disaster movie rather than an alien invasion movie, and was quickly greenlit by Fox for a summer 1996 release. The result is a very entertaining and fun, yet occasionally ridiculous, summer blockbuster to eat a large tub of popcorn with. There are some pretty big leaps of logic the audience needs to make, and it is best one leaves their brain at the door before the movie begins. Where the movie excels is in its visual effects, which still hold up today, perhaps because it was one of the last big summer movies to rely on more practical effects such as miniatures rather than almost strictly CGI like we find today. It also excels in its casting, making stars out of Will Smith as a heroic pilot not afraid to sucker punch an alien, and Bill Pullman as the President most people wish we always had in the Oval Office. Goldblum is humorous as the washed up genius, and the rest of the cast is peppered with seasoned character actors and relative newcomers, including Robert Loggia as a military adviser and commander, Mary McDonnell as the First Lady, Judd Hirsch as the very Jewish father to Jeff Goldblum’s character, James Rebhorn as the Secretary of Defense, Randy Quaid as a retired alcoholic pilot, and Brent Spiner is absolutely brilliant as Dr. Brakish Okun, the scientist who has been studying the alien technology at Area 51. This release, like the 20th anniversary Blu-ray (which is also included with this set), contains both the 145 minute theatrical cut and the 153 minute special edition using seamless branching. The special edition is the preferred version, fleshing out some of the plot devices which were trimmed for time in the theatrical cut.

Independence Day was completed on film, and Fox has gone back and scanned the original elements in 4K  and applied HDR for this release. The result is simply stunning. There is a slight improvement in detail over the Blu-ray (which was derived from the same transfer), but colors are much more natural and vibrant, and contrast is greatly improved, providing more detail in the blackness of space and the grains of crusty salt and sand in the bright whites of the salt beds (which appear as simply white sand on the Blu-ray).

Besting the Blu-ray in the audio department, Fox has outfitted the 4K UHD disc with a DTS X soundtrack that, for those equipped, provides a spatial sound environment. For those, like myself, who are not, the track is backwards compatible to DTS-HD MA 7.1, which rivals many of the more modern soundtracks. Surrounds are used to great effect, with fighters buzzing around your home theater chasing alien ships. LFE is strong but never too boomy, kicking in when appropriate. And dialogue is clear and understandable, never getting lost in the mix.

Fox has included the audio and text-based bonus features that were included on the 20th anniversary Blu-ray release.

Audio Commentary with Director Roland Emmerich and Producer Dean Devlin: The two discuss very fondly of how the movie came to be, casting, and production.

Audio Commentary with VFX Supervisors Volker Engel and Doug Smith: As you would expect, the two discuss many of the effects shots in the film.

ID4 Datastream Trivia Track: Tidbits of trivia appear on-screen about the making of the film and other easter eggs. I did notice some grammar errors from time to time.

Digital HD Copy: An insert contains a code to redeem a digital copy of the theatrical cut through Ultraviolet.

Independence Day is a fun movie, and looks and sounds great on this new UHD disc. If you’re a fan and didn’t pick up the 20th Anniversary Blu-ray last month, this is worth the few extra bucks, even if you are only future proofing yourself if you do not yet have UHD capability. 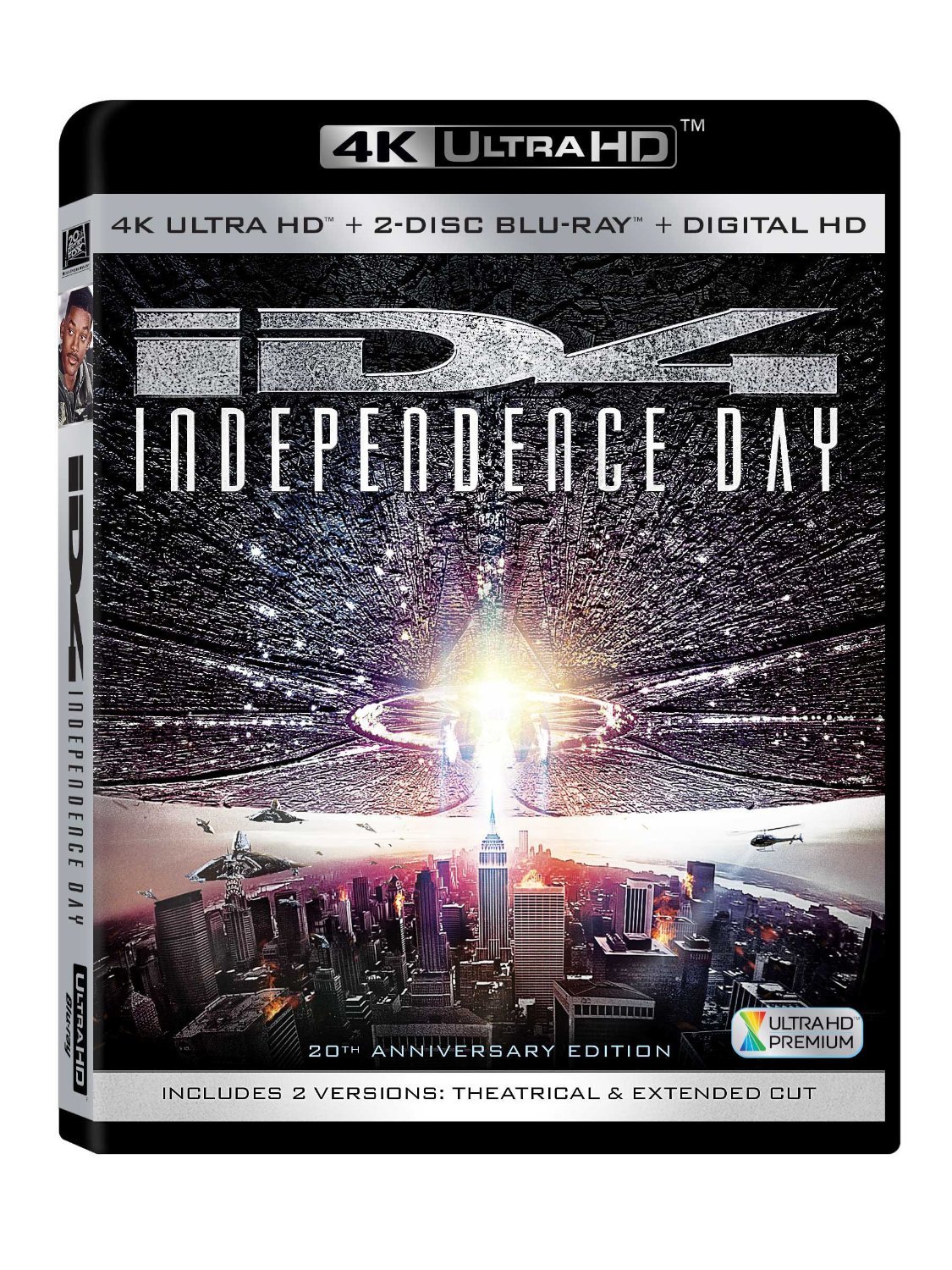