Posted on June 15, 2016 by Matt Hough
A feel-good sports biography that will leave you with a smile on your face. 3.5 Stars

A feel-good sports biography with some fictionalized elements included for added spice, Eddie the Eagle will leave you with a smile on your face with its hugely likable central character and a production which draws the viewer in from its first few seconds.

Another in a long line of feel good screen biographies dealing with an underdog trying to overcome overwhelming odds, Dexter Fletcher’s Eddie the Eagle may not soar to any great heights of creativity or emotion, but it’s hard not to like the scrappy subject of this sweetly positive and unchallenging look at a man who never gave up on his dream.

Since a tender young age, Eddie Edwards (Tom Costello at age 10, Jack Costello at 15, Taron Egerton at 22) had dreamed of nothing else but being an Olympian, but when regular sports activities reveal no inner reserves of talent, he switches to winter sports. After learning how to ski but having only basic skiing skills, he decides to go after an event for which Great Britain has no qualifier: ski jumping. The chairman of the British Olympic Committee (Tim McInnerny) changes the qualifying rules because he doesn’t want the dorkish Eddie on the team, but with concentrated effort and some basic instruction from one-time ski jumping great Bronson Peary (Hugh Jackman), Eddie is more determined than ever to jump the required 61m distance to qualify for the British Olympic team.

Focused on as a sweetly innocent underdog from the very beginning, the screenplay by Sean Macaulay and Simon Kelton wastes no time getting the viewer on the hapless Eddie’s side. With only his wonderful mom Janette (Jo Hartley) believing in him and everyone else seemingly throwing every possible roadblock in his way to achieving his dream (he’s not even dreaming for a medal of any color, only for the chance to compete for his country), Eddie becomes the poster boy for every would-be athlete who’s been bullied, humiliated, and cowed by those around them who are better looking, more charismatic, or more talented. And for a sports movie to for a change not be concentrating on winning a prize but rather for merely earning a spot on a team that doesn’t want him, Eddie the Eagle does unquestionably score some originality points. Director Dexter Fletcher crams as many montages into the film as he comfortably can picturing Eddie’s youthful misfires at sports, his series of misfortunes on ski jumps of 40m and higher, and, inevitably, the training montage once Bronson Peary is finally worn down and persuaded to coach the determined Eddie. Fletcher and his second unit director Vic Armstrong capture the sense of frenzied speed and the daredevil aspects of the art of ski jumping brilliantly as Eddie begins to make some headway in the sport even with his unorthodox style though Fletcher can’t resist keeping Eddie’s underdog status continuing at full blast as he’s tricked by his own teammates into missing the opening ceremonies and is constantly the butt of jokes amid the arrogant Finnish jumpers in the locker room. Inevitably Eddie has the last laugh as his plucky delight at his achievements make him a media sensation burying other Olympic stories in the dust, so the thickly laid-on bullying and pranking eventually get old.

Nothing at all like his cocky characterization in Kingsman: The Secret Service, Taron Egerton captures Eddie’s innocence and drive in equal measure in portraying the colorful and whimsically eccentric laborer with dreams of the Olympics. And he shares a warm and winning camaraderie with Hugh Jackman who’s playing a rather standard (and fictional) former star who burnt out far too early but sees this as a chance for redemption for a talent wasted. Jo Hartley as Eddie’s encouraging mother and Keith Allen as Eddie’s discouraging father seem as natural as the rain as the parents who want their child to make something of himself (only their methods of his accomplishing meaning differ). Tim McInnerny and Mark Benton as the priggish, superior heads of the Olympic Committee take smugness to new levels while Edvin Endre as Finnish champion jumper Matti Nykänen has a terrific moment with Eddie on the elevator as they climb upwards toward their final 90m jumps. Daniel Ings is particularly dastardly as Zach, a British Olympic hopeful who plays a dirty trick on Eddie, and Matt Rippy matches him in obnoxious behavior as the Olympic network television anchorman who has nothing good to say about Eddie’s competitive goals. Christopher Walken has a frail, late film cameo as a former jumping great who had previously trained Bronson Peary.

The film’s theatrical 2.39:1 aspect ratio is faithfully rendered in this 1080p transfer using the AVC codec. Sharpness varies due to the mix of actual Calgary 1988 footage (much shot on blurry videotape) and today’s digital technology, but for the most part, the image is detailed and exact. Color is also quite solid with the bright colors of Olympic outfits coming across especially distinctly. Black levels are just fine, and contrast has been dialed in consistently producing a very pleasing picture. The movie has been divided into 24 chapters.

The DTS-HD Master Audio 7.1 sound mix may not quite reach reference standards, but there is plenty of atmospheric activity in the surround fronts and rears especially the cheering crowds during the Olympic events. Dialogue has been well recorded and has been placed in the center channel. Matthew Margeson has composed an almost completely synthesized score to match the era, the music being delivered in both the fronts and rears with sometimes a bit too much reverb.

Let the Games Begin: Soaring with Eddie the Eagle (46:43, HD): a three-part documentary on the making of the film emphasizing the true story with its mixes of fictional elements, the working relationship between Jackman and Egerton, and a focus on how the ski jumping was filmed in a variety of ways. Commenting on this are, among others, director Dexter Fletcher, producers David Reid and Matthew Vaughn, the real-life Eddie Edwards, and actors Taron Egerton, Jack Costello, Hugh Jackman, and Iris Berben (as Petra, a German ski resort proprietress who befriends Eddie).

Picture Gallery: sixty-eight color stills and behind the scenes shots may be watched manually or in automated form.

Promo Trailers (HD): Joy, The Revenant, Kingsman: The Secret Service, among others.

A feel-good sports biography with some fictionalized elements included for added spice, Eddie the Eagle will leave you with a smile on your face with its hugely likable central character and a production which draws the viewer in from its first few seconds. Picture and sound quality are excellent, and most won’t find this a disagreeable way to spend a couple of hours. 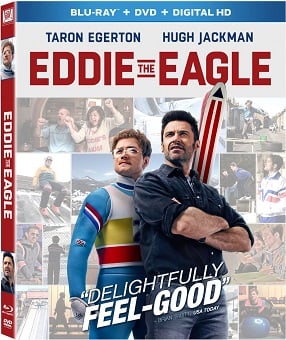