Forum List What's new Dark Style Change width
Log in Register
What's new Search
Menu
Log in
Register
Navigation
Install the app
More options
Dark Style
Close Menu
Posted on June 18, 2016 by Matt Hough
You are using an out of date browser. It may not display this or other websites correctly.
You should upgrade or use an alternative browser.
Classic Hollywood romantic fantasy is "in the pink." 4.5 Stars

Alexander Hall’s classic romantic fantasy Here Comes Mr. Jordan remains as endlessly amusing, clever, endearing, and dreamy as it was at its inception (as the play Heaven Can Wait) gaining points for its whimsical view of the hereafter and preventing larcenous bankers, crooked fighter managers, and even two murder attempts from weighing down its innate sweetness and eternal optimism.

Alexander Hall’s classic romantic fantasy Here Comes Mr. Jordan remains as endlessly amusing, clever, endearing, and dreamy as it was at its inception (as the play Heaven Can Wait) gaining points for its whimsical view of the hereafter and preventing larcenous bankers, crooked fighter managers, and even two murder attempts from weighing down its innate sweetness and eternal optimism. Criterion’s new Blu-ray release of this classic from the Columbia vaults has never looked or sounded better, all vestiges of its age now gone and thankfully forgotten.

Preparing for the most important fight of his career, Joe Pendleton (Robert Montgomery) is mistakenly taken from the earthly realm by a novice angel Messenger #7013 (Edward Everett Horton) and prevented from returning to his own body when his broken-hearted manager Max Corkle (James Gleason) has his remains cremated. Tasked with finding Joe an appropriate form to house his restless spirit, head man upstairs Mr. Jordan (Claude Rains) chooses husky banker Bruce Farnsworth who has just been murdered by his scheming wife (Rita Johnson) and secretary (John Emery). The body is OK, but Farnsworth has just been a part of a tremendous swindle cheating hundreds of people out of their money and pinning the blame on the father of lovely Bette Logan (Evelyn Keyes). Joe flips for Bette and his innate sense of decency leads him to make right all of the foul monetary dealings Farnsworth had been involved with. But Joe wants that championship fight, and he’s determined to get it engaging in a rigorous training regimen to get his new body in shape for fighting all the while wife Julia and secretary Tony plot yet another way to rid themselves of this man who seems to be leading a charmed life.

The dual Oscar-winning story by Harry Segall and screenplay by Sidney Buchman and Seton I. Miller sounds more complicated on paper than the actual visualization of it turns out to be on the screen. During the movie, Robert Montgomery inhabits three different individuals and while he never changes anything about the accent or body language he begins with as Joe Pendleton, the movie’s set-up and execution never confuse the audience with these multiple identities. Part of the genius of its simplicity lies in the masterful use of James Gleason’s Max as the audience surrogate and the charming, gently optimistic Claude Rains as the title character Mr. Jordan, each man providing for the audience a clear understanding of the fantasy that’s unfolding seen though Max’s human and Jordan’s celestial eyes. And director Alexander Hall keeps everything moving smoothly and with wonderfully crisp pacing. There are lots of long takes with the ensemble, the director not needing to resort to lots of choppy editing to force the film’s stride, and set pieces like Joe’s introduction to heaven’s gate (an airplane hangar), his amiably loving explanation to Max about how Joe has come to be in Farnsworth’s body, and the climactic boxing match (only seconds long and yet more involving than some fight films that spend nearly half their length in the ring) show the director supremely confident in handling both the fantasy and the reality of his story.

Oscar-nominated for his leading performance, Robert Montgomery’s often debonair demeanor in films gets tossed aside here playing a good-natured pug always “in the pink” and inevitably able to find satisfaction through a sequence of events that weren’t his doing. As his trainer/manager, James Gleason likewise earned a most deserved Oscar nomination, and his performance inexorably brings laughter to the lips and a lump to the throat in his complete confusion over all the body switching but in his undisguised love for his fighter. As a soft-spoken but firm guide to the afterlife, one couldn’t be in better hands than those of Claude Rains while the always welcome Edward Everett Horton amuses as the bumbling fusspot who bungles more than he assists. Evelyn Keyes adds a lovely dimension to the movie as the object of Joe’s love, Bette Logan. From feisty to wistful, Keyes’ Bette Logan was her first real chance as the romantic lead in an A picture, and her final scene with Montgomery (despite their not being close in real life) ends the film in a joyous, uplifting mood. John Emery and Rita Johnson are fine as the murderous schemers as is Don Costello as a crooked fight promoter and Donald MacBride as a confused police inspector.

The film’s original theatrical aspect ratio of 1.33:1 is faithfully rendered in this 1080p transfer using the AVC codec. The digital restoration on the movie has resulted in a beautifully clean and crisp transfer with lots of detail in facial features and hair textures. The grayscale is masterfully rich with vivid whites, rich blacks, and wonderfully engaging tones in between. Contrast has been consistently maintained throughout, and while the image is perfectly clean, when a small bit of fluff which was part of the original photography appears at the bottom of the screen for a few seconds, it jumps out due to its spoiling of the otherwise pristine image quality. The movie has been divided into 10 chapters.

The PCM 1.0 (1.1 Mbps) sound mix offers a clean and age-appropriate rendering of the original sound elements. Dialogue is always easily discernible and has been mixed with the Frederick Hollander score and the atmospheric effects beautifully so that none of these elements conflict with the other. Clean-up has resulted in an almost complete lack of hiss, crackle, and other age-typical anomalies.

Comedy and the Afterlife (32:13, HD): critic Michael Sragow and filmmaker Michael Schlesinger have a lively discussion of the narrative, themes, and influences of this most successful fantasy.

Elizabeth Montgomery Interview (1:19:42): a 1991 audio-only interview conducted by Ron Haver with effervescent Elizabeth Montgomery, daughter of the film’s star, who recalls memories of her father both personally and professionally, her impressions of Here Comes Mr. Jordan, Private Lives, Night Must Fall, Ride a Pink Horse, and other classic films featuring her father, and some comments about her own television stardom on Bewitched.

Folded Pamphlet: contains the cast and crew list, information on the video and audio transfer, and an analysis of the film by author Farran Smith Nehme.

Another great classic of Hollywood’s Golden Age comes to Blu-ray with Criterion’s release of Here Comes Mr. Jordan. With a superb audio and video presentation and some entertaining bonus material, this couldn’t come more highly recommended!

This is a wonderful film. When there's a Criterion sale, it will be mine.

Johnny Angell said:
This is a wonderful film. When there's a Criterion sale, it will be mine.
Click to expand...

I picked my copy up at B&N this weekend during a different sale (with some coupons) and membership discount for $17.27!

Would have preferred that Paramount release 'Heaven Can Wait', but if I HAVE to settle.... this one is better than nothing!
You must log in or register to reply here. 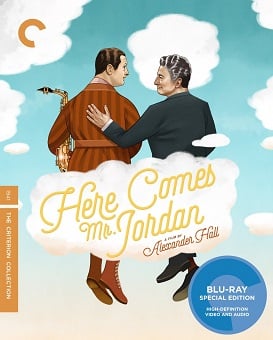