John Ford’s They Were Expendable is one of the best and most realistic World War II films of that era. The realism can be attributed in part to the fact that both Ford and co-star Robert Montgomery were officers in the Navy Reserve. The film also co-stars John Wayne and Donna Reed, and has been released by the Warner Archive in a beautifully rendered Blu-ray.

John Ford’s They Were Expendable is one of the best and most realistic World War II films of that era. The realism can be attributed in part to the fact that both Ford and co-star Robert Montgomery were officers in the Navy Reserve. The film also co-stars John Wayne and Donna Reed, and has been released by the Warner Archive in a beautifully rendered Blu-ray.

LT John “Brick” Brickley (Robert Montgomery) and LTJG Rusty Ryan (John Wayne) are the Commanding Officer and Executive Officer, respectively, of a PT Boat squadron stationed in the Philippines in December, 1941. They successfully show off the maneuverability of their boats to their superiors, who unfortunately are not particularly impressed. Afterwards Admiral Blackwell (Charles Trowbridge) tells them, “Those boats of yours maneuver beautifully. But in wartime I’m afraid I prefer something more substantial.”

Signs of an impending war with Japan are everywhere, and the two PT officers are let down by the implication that there will be no major role for them if war breaks out. In fact, Rusty decides to put in for a transfer to a destroyer. However, while the sailors are at a night club in Manila it is announced that Pearl Harbor has been attacked. Rusty throws away his transfer request and the squadron’s crew assembles at the Navy base at Cavite, south of Manila. When Brick finally gets orders for his squadron, they seem unimportant. One of his boats, he is told, should patrol Manila Bay, while another stands by to do messenger duty. When Japanese aircraft are sighted, Brick orders all of the PT boats to conduct evasive actions in the bay. The boats avoid any serious damage, and manage to shoot down several planes, but the base is mostly leveled and Rusty’s right hand is wounded by shrapnel.

Brick is summoned by Admiral Blackwell, who informs him that the base is essentially useless and that PT boats will take him and his staff to Corregidor, the island fortress in Manila Bay. Brick’s squadron is ordered to move to Sisiman Cove, which is located north of Manila and south of Subic Bay. There the squadron will be used to deliver messages between Manila and Corregidor, but the admiral still does not contemplate a battle role for the PT boats.

However, after Subic Bay and Manila have fallen to the Japanese, an enemy cruiser begins shelling the American positions on the Bataan peninsula. The cruiser needs to be sunk, and a torpedo attack by PT boats is the only feasible tactic. Rusty however, does not get to go on this mission. His hand wound has become infected, so he is sent to the hospital on Corregidor. There he is cared for by a military nurse, LT Sandy Davyss (Donna Reed), and they fall for each other. Fortunately, this is not the kind of weepy romance which afflicts so many war films. They are very realistic about their respective situations, and, when the fall of Corregidor seems to be imminent, Rusty is sent on a Top Secret mission and he cannot tell Sandy where he is going or if he will return.

Robert Montgomery and John Wayne share top billing, and both actors are excellent in their roles. Donna Reed is both beautiful and strong as the courageous nurse. Supporting roles are capably filled by such familiar faces as Ward Bond, Jack Holt, Leon Ames, and Cameron Mitchell. The authentic screenplay is by Frank Wead, himself a retired Navy officer, whose life story is told in the 1957 film The Wings of Eagles. They Were Expendable manages to avoid the usual clichés of the genre, so viewers are thankfully spared seeing any close-ups of grinning Japanese pilots attacking Americans.

The only thing wrong with They Were Expendable was its timing. MGM was not able to get it into theaters until approximately four months after the end of World War II.

The 1080p 1.37:1 black and white image is crisp, sharp, clean, and devoid of age-related damage or digital artifacts. The cinematography by Joseph H. August, also a Navy Reserve officer, makes excellent use of the locations in the Florida Keys, which realistically represent the Philippines. Our resident expert, Robert A. Harris, reports that he spotted a tiny bit of nitrate shrinkage in the final reel, but I did not notice it. He also notes that the image looks terrific when viewed via 4k projection. Readers are encouraged to read his laudatory comments:

A few words about…™ They Were Expendable — in Blu-ray

The outstanding special effects were nominated for an Academy Award.

The English DTS HD-MA 2.0 mono audio is excellent. Every word of dialogue is clear and understandable, and there is impressive punch in the battle scenes (Douglas Shearer’s sound recording was nominated for an Academy Award). There is no evidence of age-related hiss or noise. English SDH, French, and Spanish subtitles are available.

The only extra on this Blu-ray release is the film’s theatrical trailer. The video is in decent shape, but the audio suffers from a lot of flutter and weak fidelity.

The feature is divided into 44 chapters.

They Were Expendable is truly an exceptional World War II film, and this outstanding Blu-ray belongs in the collection of all movie aficionados. Readers who are interested in purchasing it can find it at the Warner Archive website or at Amazon.

Great review of this spectacular, important and immortal film, Richard...I have nothing to add beyond your own eloquent and enthusiastic praise for this Great film, other than to say THEY WERE EXPENDABLE is one of my absolute favourite WW2 films actually produced while the war was still raging...imho, only THIRTY SECONDS OVER TOKYO comes close to matching this achievement...

I still get angry thinking about the suffering of the "Battling Bastards of Bataan, no momma, no poppa, no uncle Sam"...in hopeless and desperate combat against an overwhelming enemy invasion...fighting with incredible bravery and sacrifice...being repeatedly told, and having the reasonable expectation, that reinforcements were on the way from America...not knowing, of course, that the decision had already been made to abandon them during the Arcadia conference between FDR and Churchill at the White House in December '41 - January '42...they were, indeed, expendable...holding out for nearly 5 months until forced to surrender to a brutal and merciless victor...

This film really conveys that despair and abandonment, and the honor of their valour and sacrifice too...so very glad that this fine film has finally received the home video treatment it deserves...
Reactions: Richard Gallagher

Well said, Randall. And let's not forget the Bataan Death March which followed the fall of Corregidor.

I was stationed at Subic Bay for 18 months in the late sixties so I'm familiar with most of the real locations depicted in the film.
Expand signature
Rich Gallagher
Reactions: Flashgear

Richard, considering the authentic naval pedigree behind the film of John Ford, Robert Montgomery, Frank Wead et al, I'm glad that we have your perspective as a USN serviceman to review They Were Expendable for us here at HTF...the film has always touched a nerve with me, besides just being an epic and important film...one of my uncles was taken prisoner at Hong Kong and worked as slave labor in Japan, he survived the war at less than 100 lbs...anyone who has read Donald Knox's "Death March", an oral history collection by POW survivors of Bataan will realize the terrible fate that awaited our men and Phillipine allies...that last scene of the line of men walking away into the distance chokes me up...I agree with you that the only thing wrong with the film was the theatrical release date coming about 3 months after war's end...no doubt audiences were perhaps war weary and not particularily receptive to a film about noble defeat and a downbeat ending...ironically, while the film was in pre-production and Florida filming (Feb. '45) the US Army Rangers, USN and Alamo scouts had just accomplished the famous Cabanatuan raid and the Los Banos raid was about to be mounted in a brilliant and courageous effort to free POW and captive civilians...
Last edited: Jun 20, 2016

For years John Ford dismissed this film as a personal failure. His friends and colleagues insisted he was wrong, and tried to persuade him to reconsider his views. Finally in the mid 1960s, he rewatched it, and afterwards said "well I guess I was wrong...I did a damn fine job on that picture".
Reactions: Flashgear

A huge improvement over the old flat, soft & dated SD transfer. One of the top catalogue releases of the year for me, along with She Wore A Ribbon (even 'though the year is only halfway through).
Last edited: Jun 20, 2016
Reactions: Robin9 and Flashgear

I sure wish Amazon would ship my copy of this or any of my orders from the past 2 weeks for that matter.
Expand signature
...When you eliminate the impossible whatever remains, no matter how improbable, must be the truth
You must log in or register to reply here.
Share:
Facebook Twitter Reddit Pinterest Tumblr WhatsApp Email Link 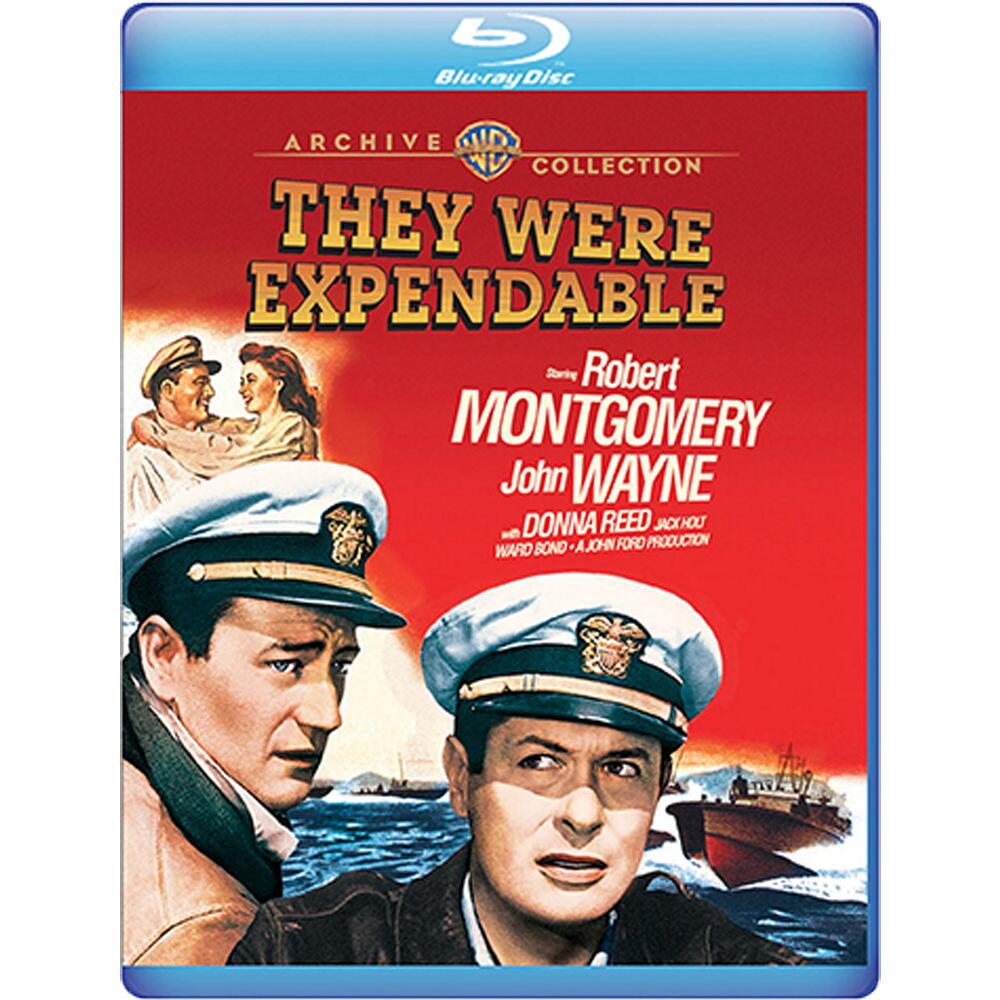