A popcorn thriller from the Hollywood studio years, Samuel Fuller’s Hell and High Water offers underwater submarine face-offs and on land action scenes all in the service of a Cold War scenario that’s even more devious and nihilistic than much of the movie pretends.

A popcorn thriller from the Hollywood studio years, Samuel Fuller’s Hell and High Water offers underwater submarine face-offs and on land action scenes all in the service of a Cold War scenario that’s even more devious and nihilistic than much of the movie pretends. Filmed in lush color and Cinemascope, Hell and High Water was a big hit in its day and does an okay job balancing its primary focus (action) with some shoehorned-in romantic scenes that don’t hold up nearly as well more than half a century later.

After noted atomic science expert Professor Montel (Victor Francen) goes missing, the fifth such scientist to do so in a matter of weeks, the world speculates what might be going on. Ex-Navy submarine commander Captain Adam Jones (Richard Widmark), now a mercenary, is sent for and learns that the five men are convinced of some kind of nefarious atomic activity going on in the Northern Pacific waters of the Neutral Zone. He’s hired for $50,000 to take a second hand submarine and his own hand-picked crew and sail to the area off the Red China coast to investigate. Montel insists on going along and brings his assistant Denise (Bella Darvi) with him. The sub, barely sea worthy due to a lack of preparation time, must contend with a series of natural and man-made obstacles on its way to scouting the islands in the Neutral Zone to see if something untoward is actually occurring. Along the way, there is strife to contend with not only concerning the mission but also with the disruptive presence of a single female on the ship with a crew of lusty males all interested in cultivating an acquaintance with her.

Director Samuel Fuller and Jesse Lasky Jr. wrote the script for the film, a compilation of quite exciting action set pieces with the rickety sub that lacks even functional torpedo tubes having to face off with the pride of the Red Chinese brigade along with the more tiresome and predictable conflicts for the lady’s attentions that distract the men from their regular duties. Filming a story in confined spaces using Cinemascope must have been quite a challenge for Samuel Fuller (this was his first encounter with Cinemascope), but it’s one he handles masterfully with the wide frame never betraying the studio sets they’re shooting on. Great miniature work is also done with the submarine models engaged in dodging and weaving beneath the surface to gain an advantage (the special effects work earned the film its only Oscar nomination, losing to another film with specialized underwater submarine sequences: 20,000 Leagues Under the Sea). The story as it eventually reveals itself (the viewer is kept in the dark for a long time while other subplots play out) offers a very clever Cold War plan involving an atomic attack and deflection of blame, and by the end, the viewer is completely caught up in the espionage of the mission and the great odds that are against the protagonists.

Richard Widmark offers another solid central performance as the celebrated former Navy captain now scrapping out a living as a mercenary with allegiances to no one. Darryl Zanuck discovery Bella Darvi is mostly stiff and robotic in her first major English language role though she plays a good portion of her part in French speaking with Victor Francen who’s quite effective as the scientist in charge of the operation. David Wayne is rather wasted as the ship’s medic, but Cameron Mitchell has some good moments as the principal rival to Widmark for Darvi’s affections. Gene Evans, Stephen Bekassy and Henry Kulky also score nicely as other seamen who get some prime scenes in the limelight.

The film’s 2.55:1 Cinemascope aspect ratio is faithfully rendered in this 1080p transfer using the AVC codec. Sharpness is very nicely presented in the transfer with facial expressions coming through with surety. Color is richly saturated and pleasing throughout with the red suffusions in certain scenes never becoming overpowering. Black levels seem a little anemic in the early going but are deeper later in the film once the sub reaches the Pacific islands that are its targets. The movie has been divided into 24 chapters.

The disc offers two lossless audio tracks: a DTS-HD Master Audio 5.1 surround track and a 2.0 stereo track. The 2.0 track handles the blending of the dialogue, Alfred Newman background score, and atmospheric effects a little better; the 5.1 track does offer the directionalized dialogue more discreetly placed, but it seems more remote and less present than the 2.0 track. Viewers, of course, will have their own preferences.

Six-Page Booklet: contains some color and tinted stills, original poster art on the back cover, and film historian Julie Kirgo’s perceptive essay on the movie.

Hell and High Water is a very entertaining Cold War submarine adventure tied to an engaging plot of subterfuge and only occasionally interrupted with distracting romantic entanglements. The Twilight Time release is a recommended one with an excellent transfer and some worthwhile bonus material. There are only 3,000 copies of this Blu-ray available. Those interested in purchasing it should go to either www.twilighttimemovies.com or www.screenarchives.com to see if product is still in stock. Information about the movie can also be found via Facebook at www.facebook.com/twilighttimemovies. 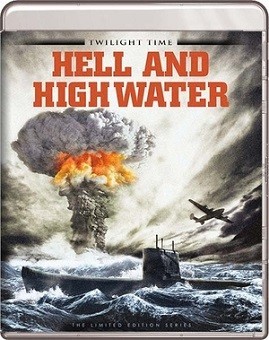