Forum List What's new Dark Style Change width
Log in Register
What's new Search
Menu
Log in
Register
Navigation
Install the app
More options
Dark Style
Close Menu
Posted on June 25, 2017 by Matt Hough
You are using an out of date browser. It may not display this or other websites correctly.
You should upgrade or use an alternative browser.
Haunting supernatural parable is an international cinema classic. 4.5 Stars

The natural runs headlong into the supernatural in Kenji Mizoguchi’s Ugetsu, one of the most celebrated Japanese films of the postwar period and widely considered to be the best film of Mizoguchi’s long and prolific career.

The natural runs headlong into the supernatural in Kenji Mizoguchi’s Ugetsu, one of the most celebrated Japanese films of the postwar period and widely considered to be the best film of Mizoguchi’s long and prolific career. Much as the protagonist in It’s a Wonderful Life has a change of attitude after confronting something other-worldly, so, too, does one of the men in Ugetsu learn a valuable lesson about life’s priorities after a mysterious encounter with a consuming spirit who wants nothing more than to claim him for her own domain.

Two farming brothers Genjurô (Masayuki Mori) and Tôbei (Sakae Ozawa) living in feudal 16th century Japan have grandiloquent dreams for their futures: Genjurô to become wealthy from his talent as a potter and Tôbei to become a well-paid samurai in the employ of a powerful provincial leader. But the men’s wives Miyagi (Kinuyo Tanaka) and Ohama (Mitsuko Mito) are openly skeptical of the men leaving home to pursue their dreams especially since the countryside is alive with marauding warriors engaged in civil war and who are conscripting the region’s men for their army and using their women as their chattel. Though the two men eventually get to town to sell their wares and do well monetarily, Genjuro becomes bewitched by a beautiful, calculating ghost (Machiko Kyo) while Tobei becomes by accident a noted warrior, all the while their wives are suffering dire fates due to the abandonment of their husbands.

The screenplay by Matsutaro Kawaguchi and Yoshikata Yoda uses bits and pieces of three short stories (two by Akinari Ueda and one by Guy de Maupassant) along with original ideas by the writers and director Kenji Mizoguchi in fashioning this cautionary tale of the cost in human misery of out-of-control ambition. As in so many of his films, Mizoguchi celebrates the nobility of women and the heavy price they must often pay for the mistakes and miscalculations of their husbands, and he expresses his admiration and admonition in a series of beautifully staged scenes that feature long takes and consummate staging including dream-like depictions of the ghostly visitors to Earth and a hypnotic sequence on the river (mostly shot in a studio tank but nevertheless mesmerizing with its shadowy fog and eerie ambiance). Mizoguchi’s long-admired use of steady, fluid, almost imperceptible camera movement is also much on display here further enhancing the delicate mixture of reality and unreality in the unfolding story. While the narrative is dealing with supernatural forces, special effects are mostly accomplished through crafty staging, wily cutting, and evocative make-up and performances giving the film an admirable sense of provocative restraint.

Machiko Kyô as the ghostly Lady Wakasa and Kinuyo Tanaka as Genjurô’s willowy wife Miyagi both give superb performances, Kyô basing her performance on actors from Noh theater and Tanaka smiling through her disappointments in quite heartbreaking fashion. Mitsuko Mito’s Ohama brays a bit too much for comfort but wears her defilement as a badge of honor late in the film. Both Masayuki Mori and Sakae Ozawa as the ambitious brothers are excellent, Ozawa especially hilarious as his crawls and claws his way to respectability as a more or less instant samurai and just as quickly realizes that his heart’s desire isn’t all it’s cracked up to be.

This 4K restoration of this celebrated work is an absolute revelation in this Blu-ray release, a blemish-free 1080p 1.37:1 transfer using the AVC codec. Having seen the film numerous times in soft, scratchy 16mm prints, I find the sharpness here simply astonishing with near perfect grayscale with only some left of frame slight density fluctuations late in the movie to mar its otherwise perfect look. The English subtitles are in white and are very easy to read. The movie has been divided into 19 chapters.

The PCM 1.0 (1.1 Mbps) Japanese sound mix is, like its video incarnation, a huge improvement over the hissy, pop-filled soundtrack of yore. Here there is only the slightest instances of crackle in a couple of places; otherwise, the dialogue, Japanese music (score by Fumio Hayasaka), and atmospheric effects combine seamlessly.

Audio Commentary: critic Tony Rayns offers a very detailed and highly listenable account of the film, background on the previous work of the director and some of his colleagues, and an excellent analysis of the movie’s themes, influences, and legacy.

Masahiro Shinoda Interview (14:09, HD): the filmmaker offers his own video analysis of the movie noting its mix of reality and fantasy, comparisons to Ozu, imaginative use of music, and the nature of the gender relationships reflected in the work.

Tokuzo Tanaka Interview (20:13, HD): the film’s first assistant director recalls aspects of the production including the working out of its themes, the working process of its director, and the recognition it achieved on its first release.

Kazuo Miyagawa Interview (10:32, HD): a 1992 interview with the film’s cinematographer as he recalls the use of cranes throughout the filming and some of the problems which he faced working with the demanding Mizoguchi.

Kenji Mizoguchi: The Life of a Film Director (2:29:54, HD): the 1975 documentary on the life and work of the director produced and directed in first person by Kaneto Shindo.

Seventy-two Page Booklet: contains some black and white stills, cast and crew lists, the three short stories which served as influences for the film’s screenplay, and film critic Phillip Lopate’s astutely written analysis of the movie.

Kenji Mizoguchi’s supreme triumph, Ugetsu (often called Ugetsu Monogatari, the name under which I first became familiar with it and the title which critic Tony Rayns uses throughout his commentary) offers a haunting parable of unequal gender relationships that craftily insinuates itself into one’s psyche more completely each time it’s watched. The Criterion Blu-ray is a near-reference quality visual and aural treat, and the collection of bonus material is second to none. Highly recommended!

A tremendous film, which I haven't revised since I saw the Criterion laserdisc over 20 years ago. This blu-ray restoration is absolutely superb.

Thank you for the wonderful review of this film. I will definitely be picking this up in the upcoming Barnes &amp; Noble 50% off Criterion sale.
You must log in or register to reply here. 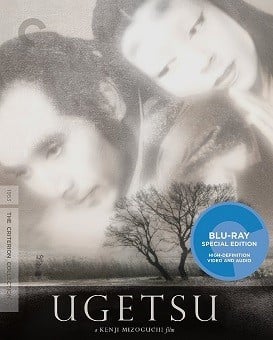