Posted on June 24, 2017 by Richard Gallagher
Excellent Blu-ray of an exciting Cops vs. Mob film 4 Stars

The Stone Killer, an above-average cops and mob film starring Charles Bronson, comes to Blu-ray from Twilight Time with an excellent high-definition transfer courtesy of Sony.

“It’s just that I don’t like to talk very much.” – Charles Bronson, interviewed by Roger Ebert

The Stone Killer, an above-average cops and mob film starring Charles Bronson, comes to Blu-ray from Twilight Time with an excellent high-definition transfer from Sony.

Bronson plays Lou Torrey, a New York City police detective who is accused of using excessive force after he shoots and kills a suspect who is holed up in a building that is surrounded by police officers. Torrey decides to leave New York after he is offered a job as Lieutenant by the Los Angeles Police Department. There, after receiving a cryptic tip about an upcoming hit, he gets involved in a series of murders which involve Vietnam veterans and members of the mob.

Al Vescari, a Mafia Don (nicely played by Martin Balsam), has for decades been planning to avenge a series of gangland slayings that occurred in 1931. He hatches a plan to recruit Vietnam veterans to be his assassins, with the intent of luring the heads of the other Mafia families to a meeting where they all will be killed. I was a bit apprehensive that The Stone Killer was going to be another film which portrays Vietnam veterans as stereotypical psychopathic killers. Indeed, there is a scene early in the film in which a doctor speaks with Torrey about a violent prisoner named Lipper. “Vietnam doesn’t make heroes,” he tells Torrey. “It makes a generation of Lippers.”

The idea that a Mafia Don would hire Vietnam veterans to carry out his revenge for killing which occurred forty years earlier is certainly disturbing. However, in general the veterans in the film come across as quirky but not necessarily psychopathic. The leader of the assassination squad is an Army veteran named Lawrence (Stuart Margolin), who has a pragmatic reason for his actions. At one point Lawrence is asked why he has signed up for this plot. “It’s my trade, sir,” he replies. “Thirty-year man. I was 15 years old when they hit Pearl Harbor. I’ve been at it ever since. Korea, ‘Nam – I just put myself on the open market like the rest of them.”

The Stone Killer contains quite a bit of graphic violence and a couple of outstanding chase scenes, one of which takes place in a parking garage. Charles Bronson is his usual taciturn self, but his physical presence alone allows him to dominate every scene in which he appears. He was 52 years old when The Stone Killer was released, yet he runs up and down staircases with ease, and in one scene he jumps three feet in the air from a standing start.

The film is directed with aplomb by Michael Winner, who a year later teamed up with Bronson to make the mega-hit Death Wish. Supporting actors of note include Norman Fell, Frank Campanella, Jack Colvin, and Paul Koslo. Stuart Margolin, who would go on to Emmy-winning fame as Angel Martin in The Rockford Files, is impressive and believable as Lawrence. Also appearing is a  young John Ritter.

The script by Gerald Wilson (from a novel by John Gardner) is a bit hurried and confusing early in the film, but the action is very compelling and exciting.

Twilight Time has delivered another exceptional transfer from Sony. The 1080p image is encoded with the AVC codec and is properly framed at 1.85:1. The color cinematography by Richard Moore (The Life and Times of Judge Roy Bean, The Reivers) is enhanced by gritty locations in Los Angeles and New York City, as well as scenes in the Mojave Desert.

For the most part the image is very sharp, with occasional softness that seems to be representative of how the film originally appeared. Bronson’s face is so craggy that it looks as though it holds a thousand stories. Black levels are solid and shadow detail is very good.

The English mono audio is presented in DTS HD-MA 1.0, and although it has inherent sonic limitations it sounds very good. Dialogue is clear and intelligible, and the action scenes contain a good amount of punch. The score by Roy Budd has excellent fidelity.

The extras on this Blu-ray release consist of an informative commentary track by Charles Bronson biographer Paul Talbot and the film’s theatrical trailer. Talbot discusses Bronson’s career and such things as John Gardner’s novel, “A Complete State of Death,” and how it differs from the film. The trailer is in good shape but gives away too much of the plot.

Also included is the isolated score track and an illustrated booklet with a provocative essay by Julie Kirgo.

The Stone Killer is an exciting, violent crime film which is sure to please fans of the genre. It has been released by Twilight Time in a limited edition of 3000 copies, so readers interested in purchasing it should go to the Twilight Time website or the Screen Archives website and confirm that it is still available. 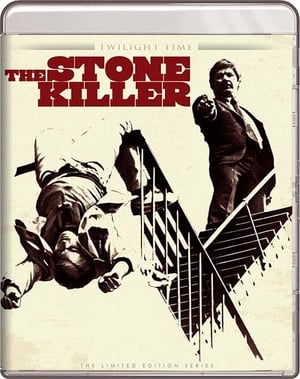