Harry Potter and the Order of the Phoenix marked a maturation of the series, with David Yates stepping in as director and would stay on for the rest of the series. Warner’s new 4K UHD release is a solid one, with a noticeable upgrade in both video and audio.

How does one review a film that has been released (and reviewed) several times on both DVD and Blu-ray? Chances are, if you are reading this review, you are probably a fan of Harry Potter and the Order of the Phoenix, and are likely more interested in what the disc has to offer in regards to its video and audio presentation, and if all or most of the special features have been retained. For answers to those questions, check the next three sections of this review.

Director David Yates may have seemed like an odd choice to direct the fifth film in the franchise. Prior to this film, Yates had several episodes of television series and two made-for-TV movies under his belt, while the directors of the first three films each had multiple theatrical features on their resume. Yates also had the misfortune of helming the adaptation of what many considered to be the weakest novel in the series. Yates and screenwriter Michael Goldenberg (Contact) trim much of the fat from the novel, providing a more evenly paced and coherent movie. The three stars are also given the opportunity to display their range as actors, particularly Daniel Radcliffe in the titular role as Harry shows his abilities as a leader and teacher. Harry Potter and the Order of the Phoenix may not be the strongest in the series, but it begins to build towards its epic conclusion.

Harry Potter and the Order of the Phoenix was shot on 35mm film and completed as a 2K digital intermediate back in 2007. Warner has taken that 2K DI, upscaled it to 2160p, and color-graded using High Dynamic Range (HDR). The result provides slightly finer detail, noticeable mostly in textures of fabrics, stones, and skin. It also provides a more natural gradation of colors, although much of Order of the Phoenix almost appears mono-chromatic as did the DVD and Blu-ray versions, so this was likely a stylistic choice. The real benefit comes from the wider range of contrast, allowing for deep blacks with strong shadow detail, most evident during the battle in the Department of Mysteries, with its dark endless hallways with tiled floors and brick walls.

For this UHD release, Harry Potter and the Order of the Phoenix gets an upgraded DTS-X soundtrack, which provides a subtle improvement over the Blu-ray’s DTS-HD MA 5.1 track. The track has a wider soundstage, with occasional use of heights to add an extra sense of immersion. LFE is also slightly stronger, but never overpowering. Dialogue is clear and consistent throughout, never getting lost in the mix.

As with most of Warner’s 4K UHD releases, there are no special features on the UHD disc. Warner has included the 2-disc Ultimate Edition Blu-ray of the film (which was repackaged last November as a new Steelbook edition), which includes the following special features:

Blu-ray Disc One (Movie):
In-Movie Experience: A picture-in-picture collection of interviews and behind the scenes footage that can be viewed while watching the movie.

Focus Points (1080p; 63:10): A collection of 28 snippets of behind the scenes featurettes, including Dementors at Little Whinging, Grimmauld Place, Tonk’s Face Transformation, The Ministry of Magic Atrium, Neville’s Cactus, Rupert’s Giggle Fits, The Paper Swallow, Professor Umbridge, Professor Umbridge’s Spies, Professor Umbridge’s Office, The Thestrals, Hog’s Head Tavern, The Room of Requirement Door, The Room of Requirement, The Inquisitorial Squad, Harry and Cho Under the Mistletoe, Kreacher, Azkaban Prison, The Mirror Explosion, Grawp, The Weasleys’ Fireworks Display, The Explosion of Decrees, The Centaurs of the Forbidden Forest, The Centaurs Take Professor Umbridge, The Thestral Flight, The Hall of Prophecy, The Choreography of Magic, and A Wizard’s Duel: Voldemort vs. Dumbledore.

Fans of Harry Potter will be happy that Warner did not make the mistake they made with the UHD release of Pacific Rim when they omitted the special features disc on that release. Video and audio improvements are subtle but noticeable.

HDR- the new "colorization" of the 2010's.
No thanks.
Expand signature
RIP Ziegfeld and Paris Theaters NYC

I thought the DTS:X sound track made great use of the overheads... I thought they did a pretty good job with the HDR application in it really made the movie feel new again. I'm looking forward to seeing the first 4 since they where in a big clean-up. I was watching them a couple months ago and they ready didn't hold up.
Expand signature
Current Equipment: Samsung 85" 4K TV (UN85HU8550) + Samsung Evolution Kit (SEK-3500U/ZA), Oppo UHD Player (203), Roku Premiere+, Apple 4K TV, Tivo Roamio Pro, Marantz SR7010 + Marantz MM7025, Xbox One X, Definitive Technology Speakers and SVS PC-2000 Subwoofer. Xbox Live: DMILLER68
Reactions: Todd Erwin

I watched this tonight. Like Todd, I found the higher resolution just slightly more detailed than the Blu-ray, most of its gain not very noticeable at all. At their best, the black levels were superb. I didn't find HDR a major factor in the look of this movie, but maybe its use was just more subtle.

The CG of Hagrid's brother and the centaurs really showed how far CG has come in the last half dozen years. They look very computer generated.
Reactions: Todd Erwin

Matt Hough said:
The CG of Hagrid's brother and the centaurs really showed how far CG has come in the last half dozen years. They look very computer generated.
Click to expand...

Those stood out to me in the original release as well. I think sometimes the HP production team traded realism for efficiency to keep these films coming out every year or so, and for as brilliant as the series is overall, there’s some dodgy CGI here and there. They have that almost translucent quality where they don’t appear to be occupying the same physical space as the live actors.
Reactions: B-ROLL and Todd Erwin
You must log in or register to reply here.
Share:
Facebook Twitter Reddit Pinterest Tumblr WhatsApp Email Link 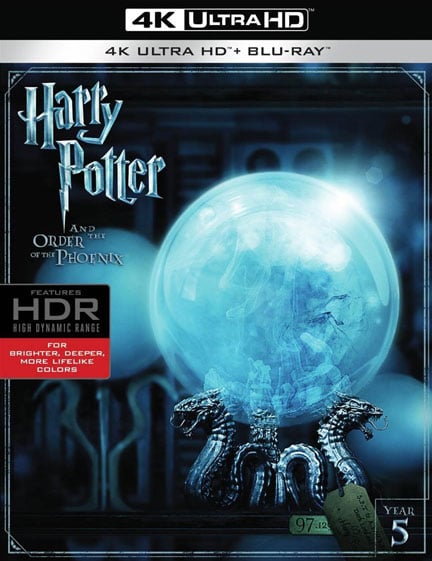