A Studio Ghibli "find" that fans will likely appreciate. 3.5 Stars

Something of an experiment with younger filmmakers under the Studio Ghibli banner, Ocean Waves is an animated feature originally made for television, a teen drama veering away from the often fantasy-laden worlds created by the great Japanese animator Hayao Miyazaki and focusing more on real life adolescent trials and tribulations.

Something of an experiment with younger filmmakers under the Studio Ghibli banner, Ocean Waves is an animated feature originally made for television, a teen drama veering away from the often fantasy-laden worlds created by the great Japanese animator Hayao Miyazaki and focusing more on real life adolescent trials and tribulations. Though a ratings success, the project didn’t generate a dime for the studio, and there wasn’t a second effort, but now Universal has brought the film to our shores decades after its premiere, and anime fans will likely find the animation fresh and inviting even if the story is rather off-putting and at most times frustrating.

Taku Morisaki (Nobuo Tobita) has been friends with Yutaka Matsuno (Toshihiko Seki) for many years, but now nearing their last couple of years in high school, a transfer student from Tokyo, Rikako Muto (Yoko Sakamoto), arrives in Kochi and transfixes Yutaka even though she doesn’t give him or any of the other students much of her attention. Except for Taku, that is, whom she measures early as someone with a generous heart and gentle nature and whom she begins to exploit, borrowing $300 from him and constantly involving him in her schemes to return to Tokyo to reunite with her father who has subsequently divorced her mother. When word gets back to Yutaka that Taku has been with the girl he covets, the friendship between the two best buds becomes forcefully strained.

The screenplay by Kaori Nakamura was based on the young adult novel by Saeko Himuro, and there are certainly situations in its flashback structure harkening back to junior and senior high school that anyone, whether Japanese or not, can easily identify with. But their principal female character Rikako is an aloof liar and a shameless user making the inevitable attraction between her and Taku somewhat hard to believe and even more difficult to encourage. Moreover, the screenplay’s terseness doesn’t allow its various characters to have detailed discussions of events that have transpired so that events as they truly happened can be explained or misunderstandings about those events can be worked out. People get mad, react badly, and walk away: frustrating for an audience who has seen what’s happened and would naturally expect the parties involved to hash out their differences rather than remain remote and incommunicative. The animation itself is, of course, lovely with the mesmerizing pastel tones and the stylized Studio Ghibli technique of less is more, but narratively speaking, the film is an exercise in frustration.

The Japanese voice actors all get into their roles quite nicely with Nobuo Tobita as Taku especially fine as the film’s narrator looking back on his close friendship with Yutaka and how it was dashed by the calculations of a selfish, self-absorbed girl who takes advantage of Taku’s sweetness and runs roughshod over it when it suits her. Yoko Sakamoto does well as Rikako, but actually Kae Araki as Rikako’s only female friend at school Yumi makes a greater impression, and at the reunion sequence that closes the film, her warm presence and good looks give promise to any adolescents who feel depressed over not reaching their peaks in high school. There is also a funny episode at that reunion with the school jock Tadashi Yamao who while intoxicated reveals his heretofore undisclosed feelings for Yumi. Hikaru Midorikawa as Yamao milks the scene for all it is worth. As best friend Yutaka who gets his heart broken when his dream girl chooses his best friend over him, Toshihiko Seki doesn’t quite get everything out of his disappointment he might have, but it’s a situation many in the audience can surely understand.

Though the liner notes claim a 1.78:1 aspect ratio, thin letterbox bars on the top and bottom suggest this has been framed at 1.85:1, and it’s presented in 1080p resolution using the AVC codec. Sharpness is as excellent as expected in the transfer, and color has been nicely saturated and artfully managed so that blooming never takes place. There is a trace of banding to be seen occasionally, but otherwise it’s a clear, clean transfer with no other problems. The white English subtitles are very easy to read. The movie has been divided into 15 chapters.

The DTS-HD Master Audio 2.0 Japanese stereo mix finds the music by Shigeru Nagata to get a nice spread through the available channels. Dialogue has been well recorded and has a firm presence in the center channel while atmospheric effects sometimes remain front and center but occasionally wander into the stereo channels.

Feature Length Layout (HD): the film may be watched completely with its storyboards, pencil sketches, and in between drawings rather than with finished animation.

Looking Back: Staff Reunion (50:08, SD): a decade after the program’s airing, five members of its creative team reunite over dinner to discuss its making, its aims, its problems, and its reception. Among those attending are director Tomomi Mochizuki, producer Nozomu Takahashi, and writer Kaori Nakamura, along with its art director and animation supervisor. The quintet also walk through Kochi and stop at various locations used in the movie.

The Ghiblies (24:29, HD): episode two of an animated television series with assorted vignettes featuring members of the Studio Ghibli team. In this episode, certain employees have a spicy curry lunch, bust some moves, take a memorable subway ride, and recall a lasting first love.

Promo Trailers (HD): Only Yesterday, When Marcie Was There, Miss Hokusai

Fans of Studio Ghibli animation will likely find Ocean Waves an undiscovered gem, even with the problems inherent in its characterization and narrative structure. The Universal Blu-ray release offers a first-rate visual and auditory experience, and some of the bonus features, particularly the episode of The Ghiblies included on the disc, are very entertaining.

Thank you for taking the time to review Ocean Waves. While it may not be the best representative of Studio Ghibli's legacy, I do look forward to adding this long sought-after title to my Ghibli collection. 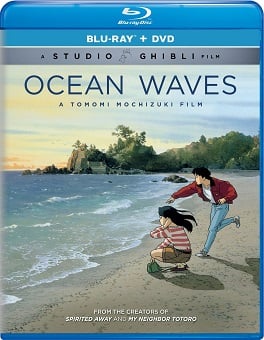