Forum List What's new Dark Style Change width
Log in Register
What's new Search
Menu
Log in
Register
Navigation
Install the app
More options
Dark Style
Close Menu
Posted on April 11, 2017 by Matt Hough
You are using an out of date browser. It may not display this or other websites correctly.
You should upgrade or use an alternative browser.
Relentless albeit ludicrous action thriller 2 Stars

Relentless action scenes don’t count for much when the plot is a jumble and the nearness to reality is too far away to be ascertained, and that’s what you’ll get with Baran bo Odar’s Sleepless.

Relentless action scenes don’t count for much when the plot is a jumble and the nearness to reality is too far away to be ascertained, and that’s what you’ll get with Baran bo Odar’s Sleepless. Can a movie that runs a spare 96 minutes and is filled with fights and chases and gunplay possibly be said to drag? This one does alarmingly so, and the fine cast of actors and a splashy production (with Atlanta subbing for Las Vegas) can’t do much with the shambles of a script and a lack of continuity that inevitably makes the drama almost laughable before the end mercifully arrives.

Vincent Downs (Jamie Foxx) has been working undercover two years as an internal affairs agent trying to ferret out the dirty cops in the Las Vegas Police Department, but he’s done such a good job that he’s suspected as being the dirtiest cop of them all by two other I.A. officers, Bryant (Michelle Monaghan) and Dennison (David Harbour). An undercover drug sting operation in which Downs had hoped to bring down some dirty cops including his partner Sean Cass (Tip ‘T.I.’ Harris) and Vegas’ drug kingpin Rob Novak (Scoot McNairy) goes sour leaving Downs with $7 million in cocaine bricks and Novak, Vegas casino owner Stan Rubino (Dermot Mulroney), and other assorted hoods on his tail. When Downs’ teenaged son Thomas (Octavius J. Johnson) is kidnapped by Rubino to use as a bargaining chip to get the drugs back, Downs has no choice but to take matters into his own hands making himself the target of the Novak family and the L.V.P.D. who think he’s mixed up with the bad guys.

Andrea Berloff’s script takes a bit of time to sort out the various players in this scenario and understand who is playing whom for control of the coke. But built into the narrative are various conflicts that seem to come and go as the need arises (a stab wound in Downs’ side sometimes debilitates him and at other times doesn’t seem to exist, especially during the three different fights he engages in with various other members of the cast; Downs manages to find several changes of clothes throughout the movie with very little effort; Thomas’s hand is smashed but on arriving at a hospital late in the film, he doesn’t even seek medical attention for it) and eventually become ludicrous in their lack of plausibility. The fights, all of them employing kick boxing and mixed martial arts, are staged nicely and feature the expected flash editing to match the relentless nature of all of the action moments in the movie, but they’re scattered amid lots of deadened scenes where the principal characters are sitting around waiting for something to arrive or for someone to act. Though filmed in Atlanta, the movie presents a realistic feel of Vegas with a detailed casino set where much of the action takes place though by the climactic scenes, all stabs at realism have been abandoned as the lunatic Novak son begins firing at will in a showroom filled with people and the heroes jump in a Lamborghini on display and (shades of James Bond) begin driving it around the room and eventually wind up in the underground parking garage where things go from merely silly to completely bonkers. There is one rotten apple amid the characters whose identity isn’t revealed until late in the film, but it’s so easy to guess the identity that even that revelation falls completely flat.

To his credit, Jamie Foxx seems committed to the material, threadbare though it most certainly is, and gives a harried performance of a man coping with the world closing in on him. Michelle Monaghan’s Jennifer Bryant is a thankless role, an officer feeling the need to prove her mettle at every turn but too closed-minded to accept truth right before her eyes. Scoot McNairy has the psychotic Novak down pat, and Dermot Mulroney does right by the slightly frayed slickster casino owner Rubino. Octavius J. Johnson hasn’t much to do but look wide-eyed and apprehensive as the abducted teen Thomas, and Gabrielle Union as his concerned mom gets pretty much wasted in a relatively minor role (though, naturally, she comes riding to the rescue in the farcical parking garage showdown where no one seems to hear her car approaching at a high speed until it manages to knock down a bad guy). David Harbour is fine as Bryant’s I.A. partner, and Tip ‘T.I.’ Harris is okay as Downs’ crooked partner.

The film’s 2.40:1 theatrical aspect ratio is faithfully reproduced in this 1080p transfer using the AVC codec. Sharpness is quite excellent in the transfer, and color is robust with believable flesh tones. But the black levels are really impressive here with nighttime flyovers of Vegas blending seamlessly into the letterbox bars. Contrast has been consistently applied throughout. The film has been divided into 20 chapters.

The DTS-HD Master Audio 5.1 sound mix is very effective especially in terms of the LFE channel which remains in constant use with surprisingly deep bass levels to sustain suspense and with the use of the fronts and rears for the driving Michael Kamm background music score. Either the recording was a bit sloppy or the actors mumbled too much, but there are some dialogue moments that are missed especially in the early going (all dialogue is relegated to the center channel). Some panning effects for cars and spraying bullets give some active life to the surround channels during the action scenes.

Deleted Scenes (5:49, HD): five scenes may be watched separately or in montage.

Sleepless may pour on the action scenes, but it’s all in the service of a mediocre script and cardboard characters in a draggy and violent thriller that isn’t worthy of its fine cast and decent production values. 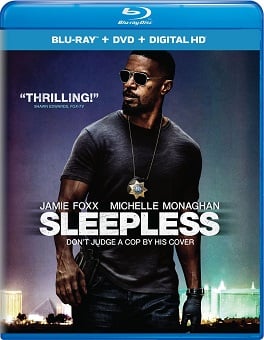