Harry Potter and the Half-Blood Prince sets up the big two-film finale like a chess match, with Dumbledore and Harry Potter searching for a weakness in Voldemort that they can exploit. Warner’s new 4K UHD release features a slight improvement in video and an upgraded audio track, and includes the previous 2-disc Ultimate Edition Blu-ray.

How does one review a film that has been released (and reviewed) several times on both DVD and Blu-ray? Chances are, if you are reading this review, you are probably a fan of Harry Potter and the Order of the Phoenix, and are likely more interested in what the disc has to offer in regards to its video and audio presentation, and if all or most of the special features have been retained. For answers to those questions, check the next three sections of this review.

The following has been taken from Cameron Yee’s review of both the original Blu-ray release and the two-disc Ultimate Edition:

The wizarding world has finally accepted the truth of Voldemort’s return, but that doesn’t make fighting the dark wizard any easier. His followers, the Death Eaters, are growing in number and strength by the moment, and growing so bold as to attack Muggles in broad daylight. The world is beginning to look like it did 16 years ago, when Voldemort was at the height of his powers. But then, as now, that time included Harry Potter (Daniel Radcliffe), the “chosen one” who nearly destroyed him then and who is prophesied to defeat him again. The key to victory may be locked in the mind of Professor Slughorn (James Broadbent), the returning Potions teacher at Hogwarts who taught Voldemort when he was a student and revealed to him an arcane piece of witchcraft that lies at the heart of his apparent invincibility. While Harry is tasked by Dumbledore (Michael Gambon) to ferret out the memory, Harry’s schoolyard nemesis Draco Malfoy (Tom Felton) has been given an assignment of his own, one that makes him increasingly distant and moody. Eventually their concurrent missions will collide, with the aftermath being more devastating than anyone would have expected.

Undeniably the darkest of the Harry Potter films, “Half-Blood Prince” is also the most mature, a reflection of the practically adult main character and his comrades. Having accepted the mantle of “chosen one” and the sacrifices it entails, Harry’s resolve to defeat the Dark Lord is focused and intense as we begin to see the hero we all know he would become. And though young love blossoms for both him and his best friends, there’s not a moment when the clouds of the impending storm aren’t casting their shadow. Though it makes for a particularly gloomy installment, it also affords the actors some of their strongest performances, in particular when each must return to the comfort and strength of their friendship. Though much of the events of this sixth film can be seen as set up for the two-part finale, I doubt anyone will deny it whets the appetite for what is to come.

Harry Potter and the Half-Blood Prince was shot on 35mm film and completed as a 2K digital intermediate back in 2009. Warner has taken that 2K DI, upscaled it to 2160p, and color-graded using High Dynamic Range (HDR). The result provides slightly finer detail, noticeable mostly in textures of fabrics, stones, and skin. It also provides a more natural gradation of colors, although director David Yates has once again muted his color palette somewhat as he did in the previous entry. The real benefit comes from the wider range of contrast, allowing for deep blacks with strong shadow detail, most evident during the scene in the cave where Dumbledore and Harry are trying to find a Horcrux and in the billowing clouds of memories. Another wonderful 2160p upscale by Warner.

For this UHD release, Harry Potter and the Half-Blood Prince gets an upgraded DTS-X soundtrack, which provides a subtle improvement over the Blu-ray’s DTS-HD MA 5.1 track. The track has a wider soundstage, with occasional use of heights to add an extra sense of immersion. LFE is also slightly stronger, but never overpowering. Dialogue is clear and consistent throughout, never getting lost in the mix.

As with most of Warner’s 4K UHD releases, there are no special features on the UHD disc. Warner has included the 2-disc Ultimate Edition Blu-ray of the film (which was repackaged last November as a new Steelbook edition), which includes the following special features:

Blu-ray Disc One (Movie):
Maximum Movie Mode: A picture-in-picture collection of interviews and behind the scenes footage that can be viewed while watching the movie.

Harry Potter and the Half-Blood Prince: Behind the Magic (SD; 46:50)

First Footage from “Harry Potter and the Deathly Hallows” (HD; 1:50)

Fans of Harry Potter will be happy that Warner did not make the mistake they made with the UHD release of Pacific Rim when they omitted the special features disc on that release. Video and audio improvements are subtle but noticeable on Half-Blood Prince as they were on Order of the Phoenix.

I watched this tonight. I agree, it's only a slight uptick from the original Blu-ray release in terms of picture quality. The blacks are the most impressive thing about the UHD edition as the Deatheaters flying through the air and the inky memories are truly black. The upgraded sound is more noticeable, and I enjoyed the soundtrack much more this time around.
You must log in or register to reply here.
Share:
Facebook Twitter Reddit Pinterest Tumblr WhatsApp Email Link 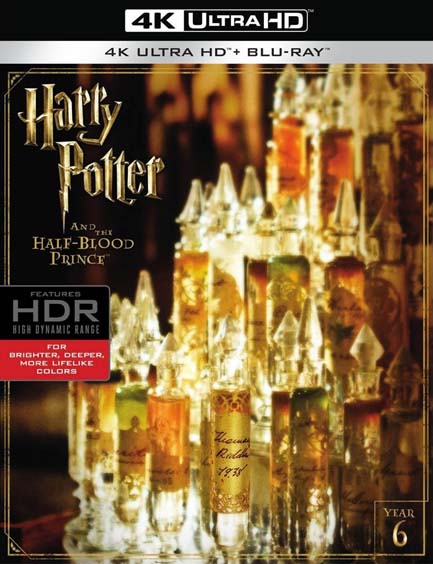