Posted on April 18, 2017 by Todd Erwin
The performances complete the recipe 4 Stars

Michael Keaton was was largely ignored by the Academy for his role as Ray Kroc in The Founder , which was a shame, as it is probably his best performance of his career. The film is a fascinating story of how the McDonald brothers revolutionized the food industry and how one man made it a success and in the process stole it out from under them.

Ray Kroc (Michael Keaton) is a travelling salesman, driving from one Drive-In diner to another, peddling his milkshake mixer than can make multiple milkshakes at the same time, occasionally selling one unit to a restaurant. When he receives an order for six of these machines for a restaurant in San Bernardino, California, he calls them to verify the order, and in the process they order two additional mixers, overhearing chaos in the kitchen. Intrigued, Ray makes the long drive out from the Mid-West to the Inland Empire of Southern California. He arrives at a parking lot with a long line of people standing in line outside, but the line is moving quickly. Ray places his order for a cheeseburger, fries, and a Coke, and again is surprised when his order arrives only seconds later in a paper bag. He sits at a park bench,opens his bag, and is intoxicated by the smell and taste of the food. Mac McDonald (John Carroll Lynch) is outside, greeting customers, and invites Ray inside for a tour of the restaurant. Mac’s brother, Dick (Nick Offerman), is inside running the kitchen, an efficient assembly line of grills, deep fryers, potato slicers, drink dispensers, condiment dispensers, etc. Ray cannot believe what he is seeing, and returns the next day to pitch the idea of franchising their little hamburger stand, McDonald’s. The brothers have tried before, the result a failure to stay on top of quality control and consistency at the additional locations. Ray won’t give up, almost begging them to let him run with their concept in the Mid-West. Back home, he relates his experience to his wife, Ethel (Laura Dern), and pitches the concept to his friends at the Country Club, who think of Ray as a fast-talking salesman always looking for a quick buck and heckle him about some of his previous schemes before offering to buy one of the first McDonald’s restaurants after his prototype is a success. Finding his wealthy golfing buddies untrustworthy by offering items not on the franchisee menu, Ray goes after the small businessman, and slowly begins to build his empire of restaurants. But the McDonald brothers are not happy with some of Ray’s business decisions, which they feel dilute the brand, even though Ray sees them as ways of saving money for his restaurants, which, although profitable, are not making him or the McDonald’s much money. With Ray about to face foreclosure on his home, which he used as collateral for his first restaurant, he meets Harry J. Sonneborn (B.J. Novak), who tells him the key to success is not selling hamburgers, but collecting the rent from the franchisee from the land the restaurant is sitting on. This infuriates the McDonald brothers, who eventually sell their stake and namesake to Ray, only to have Ray open a McDonald’s across the street from their original hamburger stand.

The early history of McDonald’s is a fascinating story, and director John Lee Hancock (who is no stranger to biographical dramas, with films such as Saving Mr. Banks, The Blind Side, and The Rookie on his resume) and screenwriter Robert D. Siegel tell the story with passion and humor, and the visuals that accompany Dick McDonald’s narration of how he streamlined the inner-workings of the kitchen are mesmerizing. Michael Keaton walks a very fine line from struggling traveling salesman to heroic genius to eventual villain and total jerk, but never making Ray a caricature. Both John Carroll Lynch and Nick Offerman as the McDonald brothers are also superb, proving that Offerman is an excellent character actor and rarely receives the credit he often deserves (he was also excellent in Me and Earl and the Dying Girl as Greg’s father). The women in Ray’s life, however, are under-written, giving Laura Dern and Linda Cardellini (as Ray’s eventual second wife, Joan) not a whole lot to work with. In fact, Joan first appears as the wife of one of Ray’s franchisees, their eyes sparkle in the two additional scenes they appear together, and at the end of the film, they are now married. The Founder skips over some events like the one just mentioned, and essentially stops at the point where Ray has taken control and purchased the company. We don’t get to see how McDonald’s became a global empire, its many successes and failures in the food industry (McDLT and Salad Shakers, anyone?), but that’s a lot of material to cram into a two hour movie.

The Founder arrives on Blu-ray in a nice, but not necessarily dazzling, 1080p transfer compressed using the AVC codec that preserves the film’s 2.40:1 theatrical aspect ratio. Captured digitally on Arri Alexa XT cameras, the image has a warm, often earthly tone to it. Colors are natural, with added saturation to the neon golden arches. Detail is quite good, particularly the brick walls of the McDonald brother’s offices and natural dirt on vehicles. Contrast is also very good, with deep blacks in the exterior night scenes at the restaurants or the dark dinner meetings at the steakhouse. This is a very clean transfer with minimal noise and compression artifacts.

The Founder comes with a fairly standard DTS-HD Master Audio 5.1 track, what one would expect for a drama of this type. Dialogue is clear and understandable throughout, directed mostly to the center channel. Music and atmospheric effects are spread across the soundstage, providing a naturally subtle sense of immersion. LFE is used sparingly, mostly to help fill out the soundtrack’s low end.

Behind the Scenes Gallery (1080p; 20:10): A collection of EPK shorts that barely scratch the surface of the making of the film, including The Story Behind the Story, Michael Keaton as Ray Kroc, The McDonald Brothers, The Production Design, and Building McDonalds: Time Lapse Video.

The title may be deceiving, as Ray Kroc was not The Founder of McDonalds (it is actually taken from what appears on his business card at the end of the film), but the movie is an entertaining and fascinating story of one of our nation’s true icons, with outstanding performances from it main leads. Audio and Video are representative of how the film may have appeared in theaters, but the extras are somewhat lacking in content. 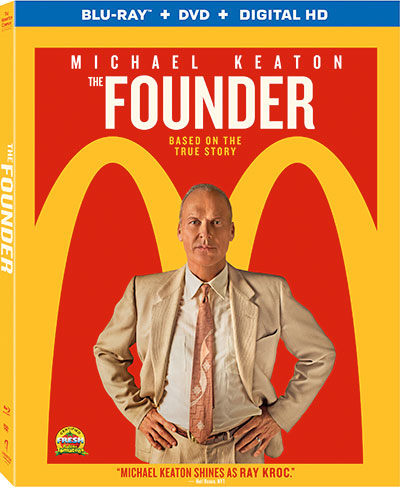