Posted on May 15, 2019 by Todd Erwin
Terrific Upgrade of a Mediocre Film 4 Stars

Roland Emmerich’s Godzilla arrives on 4K UHD Blu-ray from Sony Pictures Home Entertainment is a stunning new transfer. Too bad the movie is still rather mediocre.

A fishing ship is attacked in the South Pacific by a creature one survivor refers to as “Gojira,” as that creature leaves a trail of destruction along the Pacific Rim, through South America, the Caribbean, and making its way along the Northeastern Atlantic and heading for Manhattan. Following the creature’s path are Colonel Hicks (Kevin Dunn), nuclear biologist Nick Tatopoulous (Matthew Broderick), and French insurance/secret service agent Phillippe Roaché (Jean Reno). Godzilla eventually lays siege to the city that never sleeps, causing Colonel Hicks to order an evacuation of the city, against campaigning Mayor Ebert (Michael Lerner) and his assistant Gene’s (Lorry Goldman) wishes (a not-so-funny inside joke that overstays its welcome almost immediately). Struggling reporter (and former fiancé of Nick’s) Audrey (Maria Pitillo) and cameraman Victor “Animal” Palotti (Hank Azaria) follow Hicks, Nick, and the military as they try to take down Godzilla and find his nest before more eggs hatch.

Godzilla could have been a better movie in more capable hands. Emmerich and producing partner Dean Devlin rewrote much of Ted Elliot and Terry Rossio’s (Pirates of the Caribbean, The Mask of Zorro) original script, so much so that they only received co-story credit on the film. Rather than give us a cohesive plot, Devlin and Emmerich do what they have proven they do best in films like Independence Day and Stargate, and that is blow things up with grand spectacle. And that they do in abundance, more than their previous films combined. They destroy the Chrysler Building among other more generic skyscrapers, the Brooklyn Bridge, and even Madison Square Garden. Broderick is just okay as Nick Tatopoulous (another inside joke, sharing the same last name as the film’s production designer), but I’ve never really thought of him as an action star, and neither has anyone else since this movie was released. Jean Reno seems to be having some fun here, but that is about it. Every other character and performance is fairly wooden and cookie-cutter stereotypes.

Sony has a history now of bringing their catalog films to the 4K UHD Blu-ray format with a passion towards replicating or improving how that movie appeared in theaters. Godzilla is no exception, with a gorgeous 2160p HEVC-encoded transfer with HDR10 high dynamic range that preserves the film’s original 2.40:1 theatrical aspect ratio. Colors are natural and consistent throughout, appearing much more vivid than on previous format releases. Detail is strong, with natural film grain and refined textures (Jean Reno’s beard is a good example). Contrast is also excellent, a definite improvement of the now almost 10 year old Blu-ray, with better refined shadow detail and blacks that never appear crushed.

Godzilla has been given a new Dolby Atmos track that blows the excellent DTS-HD MA 5.1 track from the previous Blu-ray release (that track has been included on the UHD disc, too). Bass is stronger on this track, giving each explosion and monstrous foot stomping an extra sonic push. Heights are implored rather subtly, allowing Godzilla’s roar to be much more immersive, seeming to reverberate all around and above you. Dialogue remains clear and understandable throughout.

All Time Best Godzilla Fight Scenes (480i; 10:14): A look at Godzilla through this and other movies also available from Sony Pictures Home Entertainment.

For fans of the film, this is definitely a worthy upgrade. 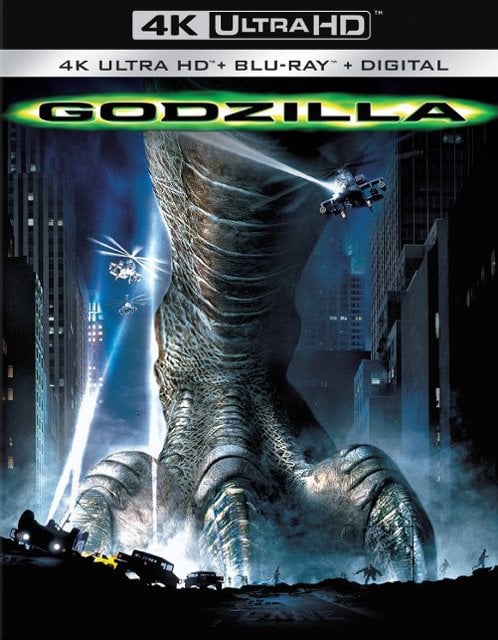