Forum List What's new Dark Style Change width
Log in Register
What's new Search
Menu
Log in
Register
Navigation
Install the app
More options
Dark Style
Close Menu
Posted on June 10, 2019 by Todd Erwin
You are using an out of date browser. It may not display this or other websites correctly.
You should upgrade or use an alternative browser.
“There's nothing in the world more powerful than a good story.” – Tyrion Lannister 4 Stars

Out of all eight seasons, these final six episodes are quite possibly the most divisive and controversial among the show’s die-hard fans. Bringing closure to anything this popular is a daunting task – ask the creative teams behind Lost, Seinfeld, How I Met Your Mother, The Sopranos, even Chuck. A finale is often a slippery road along a the edge of a razor. An easy cop-out would be a sure-fire crowd-pleasing finale, or roll the dice and go with something that takes fans by surprise. Any fan of Games of Thrones should know that quite often the storylines would take the latter road. Look at episodes such as The Rains of Castemere (aka The Red Wedding), The Lion and the Rose, Mother’s Mercy, and Baelor, to name a few. So, that leaves this reviewer wondering why so many were upset with how the series ended. Sure, many of us expected the series to end as we had expected, with a certain un-named character taking possession of the Iron Throne. If that had happened, then this would not be Game of Thrones, and quite possibly fans would also be in an uproar, although perhaps not as much so, that writers David Benoiff & D.B. Weiss took the easy and expected road. One other item to consider is that for its first six seasons (all of which consisted of ten hour-long episodes), the series was more character driven, giving us one, maybe two big action-packed episodes per season. At the end of the sixth season, it was announced that Game of Thrones would end after season eight, and that these last two seasons would be shortened (seven episodes for season 7, six for season 8). With a shortened episode order from the network, and the fact that the producers were instructed to wrap up the storylines in the final 13 episodes, the show shifted to one that was more action-based, more spectacle than character study. Viewers got to spend less time with their favorite characters and more time on the battlefield.

So, how was season eight? It was very good, in my opinion, but not great. The first two episodes, Winterfell and A Knight of the Seven Kingdoms, refamiliarized us with were the previous season left off, re-introduced us to its main characters, and set us up for the epic battle against the Night King and his army of White Walkers in The Long Night. As exciting as that episode was, I felt that the battle lasted a bit too long (it is the longest episode in the series, running 81 minutes), although it does come to a thrilling conclusion. The Last of the Starks also could have used some trimming (it runs 77 minutes), as everyone rejoices but then decides who they should follow as the showdown between Daenerys (Emilia Clarke) and Cersei (Lena Headey) nears. The final two episodes, The Bells and The Iron Throne, give us that showdown we have been waiting for (but possibly not expecting) and closure to many of the storylines as characters begin to go their own way. I found the ending to be satisfying and very much in the tradition of the series.

Game of Thrones is broadcast on HBO in 1080i and streamed in up to 1080p On Demand through the HBO-Go and HBO Now apps as well as through a subscriber’s cable or satellite service provider. HBO provided me with a code for review which was redeemed on Vudu in their HDX (1080p) resolution. Overall, the series appeared almost as good as previous seasons of the series did on Blu-ray. Detail was not quite as sharp as I’m used to seeing on Blu-ray, a slight softness befalls most of the image, but you really have to be looking for it. I did notice some very minor compression artifacts during many of the darker sequences, although The Long Night was not the overly dark and compressed mess that many complained about after that episode’s initial broadcast. Colors are bold and vivid where intended. Black levels are decent, with minimal crush and compression artifacts.

Game of Thrones is broadcast in Dolby Digital and streamed in Dolby Digital+, both in 5.1 configurated mixes despite being mixed in Dolby Atmos for its eventual Blu-ray and UHD Blu-ray physical media release (I’m looking forward to hearing the spiral staircase during the opening credits in Atmos later this year). As 5.1 mixes go, the Dolby Digital+ track on Vudu is fairly immersive, with pounding LFE and battle sounds (such as arrows, crying/yelping victims, and swordplay) emanating from all channels. Dialogue in five of the six episodes is clear and understandable. For some reason, dialogue has been mixed at a much lower level on The Long Night, getting progressively lower as the episode reaches its conclusion.

On Vudu, the following extras are included:

Game of Thrones: The Last Watch (1080p; 103:06): This is a very interesting and surprisingly detailed look at the production of Season 8, without the need for a narrator or staged interviews.

Season 8: In Production Featurette (1080p; 4:27): Standard EPK behind the scenes short featuring interviews with the cast and crew.

Season 8: Anatomy of a Scene (1080p; 17:17): The correct title of this featurette is The Long Night Unveiled, this is really more a behind the scenes look at the third episode rather than an individual scene.

Love it or hate it, the eighth and final season of HBO’s Game of Thrones comes to a crushing end. The digital version is available now on Vudu and other digital platforms, and Vudu’s presentation is likely better than the original HBO broadcasts but likely on-par with On Demand. 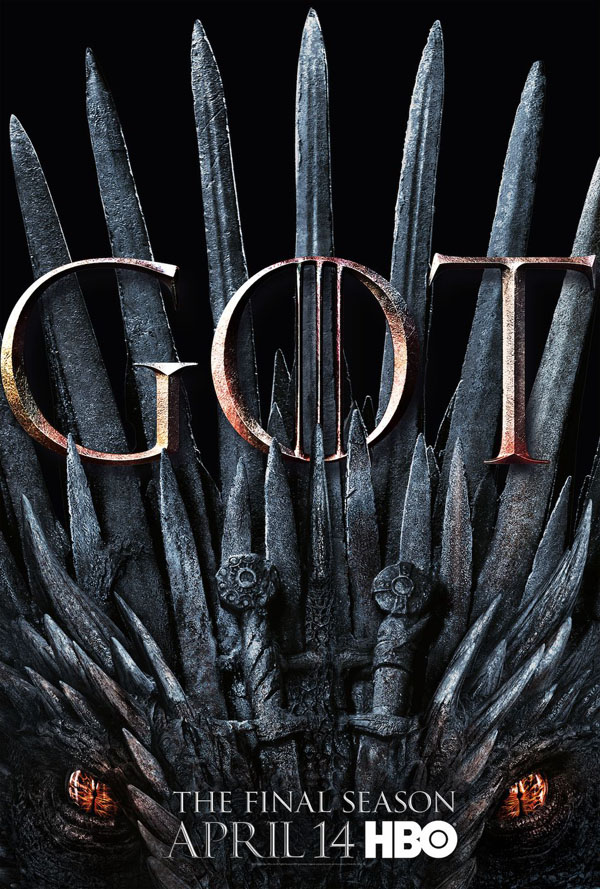