A masterfully performed, beautifully written and faithfully directed feature from Denzel Washington, Fences has the power to stay with you once the film has finished. The film never attempts to stray too far from the atmosphere of the originating Broadway play, but that doesn’t mean it should have. Rather, the cinematic medium here tailors more finely our emotional journey with the characters, and just as importantly, gives this story access to a much broader audience. And the results are worthy of our celebration.

“Like you? I go outta here every morning, I bust my butt ’cause I like you? You’re about the biggest fool I ever saw. A man is supposed to take care of his family. You live in my house, feed your belly with my food, put your behind on my bed because you’re my son. It’s my duty to take care of you, I owe a responsibility to you, I ain’t got to like you! Now, I gave everything I got to give you! I gave you your life! Me and your Mama worked out between us and liking your black ass wasn’t part of the bargain! Now don’t you go through life worrying about whether somebody like you or not! You best be makin’ sure that they’re doin’ right by you! You understand what I’m sayin’?”

Troy Maxson (Denzel Washington) is a charismatic family man, worn into the routine of his work and home life, riding the back of trash trucks collecting garbage with his best friend, Jim Bono (Stephen Henderson,) stopping for a drink some nights on the way home to his loving wife, Rose (Viola Davis) and teenage son Cory (Jovan Adepo,) and handing over his paycheck on a Friday night to Rose, who runs the home for him and his son. Troy has a grown son from before his marriage, Lyson (Russell Hornsby,) a musically gifted young man who dreams of making it as a musician who always seems to need to borrow just a little cash. Troy’s brother, Gabriel (Mykelti Williamson), mentally impaired from a war injury, lives in a home just down the street, often picked on by neighborhood kids. Troy’s world is small, contained, filled with his hard work and playful stories, but a shadow of regret and anger touch his world. A talented baseball player, his chance at that life was denied by the segregated, racist America. Pushed aside in life, Troy feels it to his core, and though he draws laughter and smiles with his stories, and unconditional love from his wife, it haunts him.

Fences, adapted faithfully from his Broadway play (and revival) was written by the insightful and gifted August Wilson. The film is contained and focused like the play, but that works in its favor. Fences’ rich dialogue has space to breathe, and that is far more important than any possible distractions that could be introduced from a mishandled opening of scale and scope. The cinematic medium is an important one for great plays; it allows the work to reach a broader and wider audience, taking it beyond the stage and limited venues in cities into the deeper reach of cinema screens and eventually home theaters. For plays with tight location focus, the added value of the transition to the big screen is focus. On the stage, the audience’s attention is less controlled on where their focus must be. Attention to a stage can be shifted by the set design or the lighting design that can narrow specifically under the gaze of a spotlight. In film, in the hands of a director, the same story, the same scenes can be more deliberately shaped. The focus on a character, where the camera lingers, how and when a close-up of a character fills the frame, or where the camera holds the reaction of a character. It is where the director’s actions will enhance or detract from the material. And here is where director Denzel Washington’s greatest accomplishment lies. His reverence for the August’s play–and deep familiarity having played the same role for the award-winning Broadway revival–informs how he shapes our journey with these characters.  And what an extraordinary and potent journey.

In full embrace of the rich material and exquisitely good performances, Washington, as director, frames what we see capably and without frills, allowing the magnificence of those performances to shine-including his own which was strong contender for the best performance of the year (his loss to Casey Affleck in the Best Actor category was tough). But the revelation here comes from the power and weight of Viola Davis as Troy’s devoted wife, Rose. She is a master class all by herself. A performance of perfection with the only flaw in her Academy Award win being that it should have been in the Best Actress, rather than Best Supporting Actress, category. The rest of the cast are top notch. Russell Hornsby’s Lyon’s yearning for his father’s understanding, is lively and sympathetic, Jovan Adepo’s Cory, fearful and misunderstood by his father equally sympathetic, but living under the same roof as Troy, Jovan’s portrayal is filled with restraint and fearful anguish. Stephen Henderson’s Jim Bono, best friend to Troy, is effortlessly likable. An easygoing man who understands Troy’s frets and frustrations, Henderson plays his role with equal measures of joy and understanding. And young Saniyya Sidney, who appears late in the third act, is a breath of youthful fresh air. A lovely young actress who holds her own in her relatively few scenes (check out my interview with Saniyya Sidney here.) A marvelous and gifted cast.

Through the prism of the Maxson family story, Fences is a treatise on the pressures of poverty and powerlessness found in a racially unjust America. It is also an examination of the influence our family dynamic, and the cycles of external forces, can have in shaping and influencing who we become. A fascinating and potent pursuit, invoking larger social points about being black in America, while never betraying the central story of Troy Maxson, his family, and their story in the world.

The tight locations and limited settings in the film at times feel like the home of a replay of memories that have been fixed around pivotal personal moments in a life. Where memories become concentrated as a person might reflect, on just those key moments that etched themselves indefinitely in our minds. Our family homes, often the central space where our lives important moments unfolded, would be the natural anchor of our recall. Fences, in many ways, seems like the reflection of Troy back upon the etched moments of his family life with Rose and Corey and Lyons, and of course Raynell (the unexpected daughter); an emotional mix of the raucous and regretful, of the happy and the hurtful.

Fences, framed at 2.39:1, was shot on film which lends the experience and looks terrific in high definition. The film’s color palette is relatively constrained, indicative of the period setting, with muted red, browns, yellows and grey-brown dominating, but the contrast is rich, as is the level of detail. The confined setting, heavily concentrated in the Maxson’s back yard, is filled with textures and detail that tell the well lived-in story of the Maxson’s lives. Flesh tones are natural and there are no flaws to report in this presentation.

A modest audio display, Fences doesn’t task the DTS-HD Master Audio 7.1 track, but where it counts, in the dialogue and light ambient sounds (of the front street, the backyard) are offered with precision and subtlety.  Excellent clarity and balance are strong offering here, and the few times that music is called upon, it is delivered without issue.

A limited collection of special features that cover a few core elements of this film, beginning with a short examination of the original play, moving to the core cast of the Broadway revival coming back together for the film production, Denzel Washington’s direction, Viola Davis’ Oscar winning performance, and the Pittsburg location for the shoot.

Expanding the Audience: From Stage to Screen

The Company of Fences

Fences is a moving film. A dramatic and forceful experience elevated by riveting performances, and written with superb insight into the strengths and weaknesses of family, and most specifically, the joys and failings of Troy’s life. Denzel Washington chose a profoundly important work for his third directorial feature, following the solid Antwone Fisher and The Great Debaters–all important stories of African American lives and the African American experience in the U.S. Fences is the most sure handed of his feature films, benefiting from his steady directorial approach, and gifting us the most affecting performances. One of the very best films of 2016 that comes highly recommended.

Washington should have won Best Actor for this film.
Expand signature
Crawdaddy's favorite "The Mandalorian" Quotes: "This is the Way" and "I have Spoken" 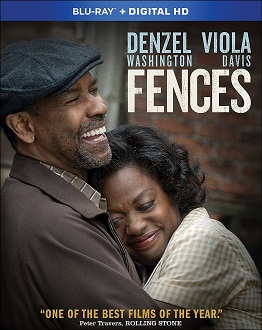