Arrival is the type of science fiction film that comes along once in a blue moon (pardon the pun), a film more concerned about its message and drama, taking its time to tell its story, rather than wow its audience with visual effects set pieces.

Arrival is a difficult movie to describe without giving away too many spoilers. When twelve large, elliptical spaceships arrive at various points across the Earth, the US military enlists the aid of linguistic expert Louise Banks (Amy Adams) and physicist Ian Donnelly (Jeremy Renner) to make contact with the aliens and find out what they want in an expedition led by Colonel Weber (Forest Whitaker). The stakes are high, as other nations, particularly China and Russia, are a bit more afraid of these invaders, ready to go to war with the unknown visitors, while Weber tries to maintain a cautious approach despite the potential threat and increasing public pressure to take action. As Louise and Ian begin to interpret the language of the heptapods (named for their similar appearance to squids and octopuses and communicating through ink drawings), a phrase is interpreted as “offer weapon,” which some nations also interpret as “use weapon,” placing the world on an even higher alert, fearing the heptapods are here to conquer the planet. Louise and Ian must now race against the clock to determine what that phrase actually means before China launches a military attack.

Based on the short story Story of Your Life by Ted Chiang, screenwriter Eric Heisserer (remakes of The Thing and Nightmare on Elm Street) and director Denis Villeneuve (Sicario, Prisoners) take their time to unfold this story, allowing the audience to experience the difficulty of learning a language that has no basis of what is known on our planet. Louise and Ian have to play the part of both teacher and pupil in their attempts to communicate with the heptapods, something that the government doesn’t want to understand. However, Colonel Weber does understand this, allowing the two much more latitude than one would expect in a Hollywood science fiction movie (Independence Day, for example). It is the film’s three leads (Amy Adams, Jeremy Renner, and Forrest Whitaker) that really help sell the believability and allow the audience to connect with the story, and they all should have received Oscar nominations for their work in Arrival. Please check out Neil Middlemiss’ more in-depth examination of the Blu-ray edition for a more comprehensive review.

Arrival was captured in 2.8K resolution using the Arri Alexa XT M and XT Plus cameras, then completed as a 2K digital intermediate. Paramount’s upscaled 2160p transfer retains the film’s theatrical aspect ratio of 2.40:1, and benefits from a slight increase in resolution, but mostly from increased contrast thanks to the inclusion of HDR. Many have complained that the image is often too dark, but that is the filmmaker’s intention. The use of HDR does allow for more shadow detail to be retained during even the darkest of sequences, with the brighter portions never appearing blown out. Colors are natural, with more gradations than what appear on the Blu-ray, but are still somewhat muted (again, artistic intention).

The UHD edition of Arrival contains the same DTS-HD Master Audio 7.1 track as the Blu-ray. This is a very immersive track, with subtle uses of discrete surrounds but providing a wide, enveloping soundstage. Johann Johannsson’s score is more atmospheric in nature (much like Steven Price’s score for Gravity), and is spread across all channels. LFE is present, adding emphasis to some of the sound effects. Dialogue is clear and understandable, directed mostly to the center channel with some occasional panning where necessary, and never getting lost in the mix.

Xenolinguistics: Understanding Arrival (1080p; 30:03): This is a fairly fast-paced look at the development, casting, and production of the film.

Acoustic Signatures: The Sound Design (1080p; 13:59): As the title indicates, this is a look at the creation and use of sound in the film.

Digital HD Copy: An insert contains a code to redeem a digital copy through Ultraviolet partners, including Vudu, which does give you a UHD version.

Arrival is an intelligent science fiction film that pays off at the end. Video and Audio are first rate, especially on this UHD edition. 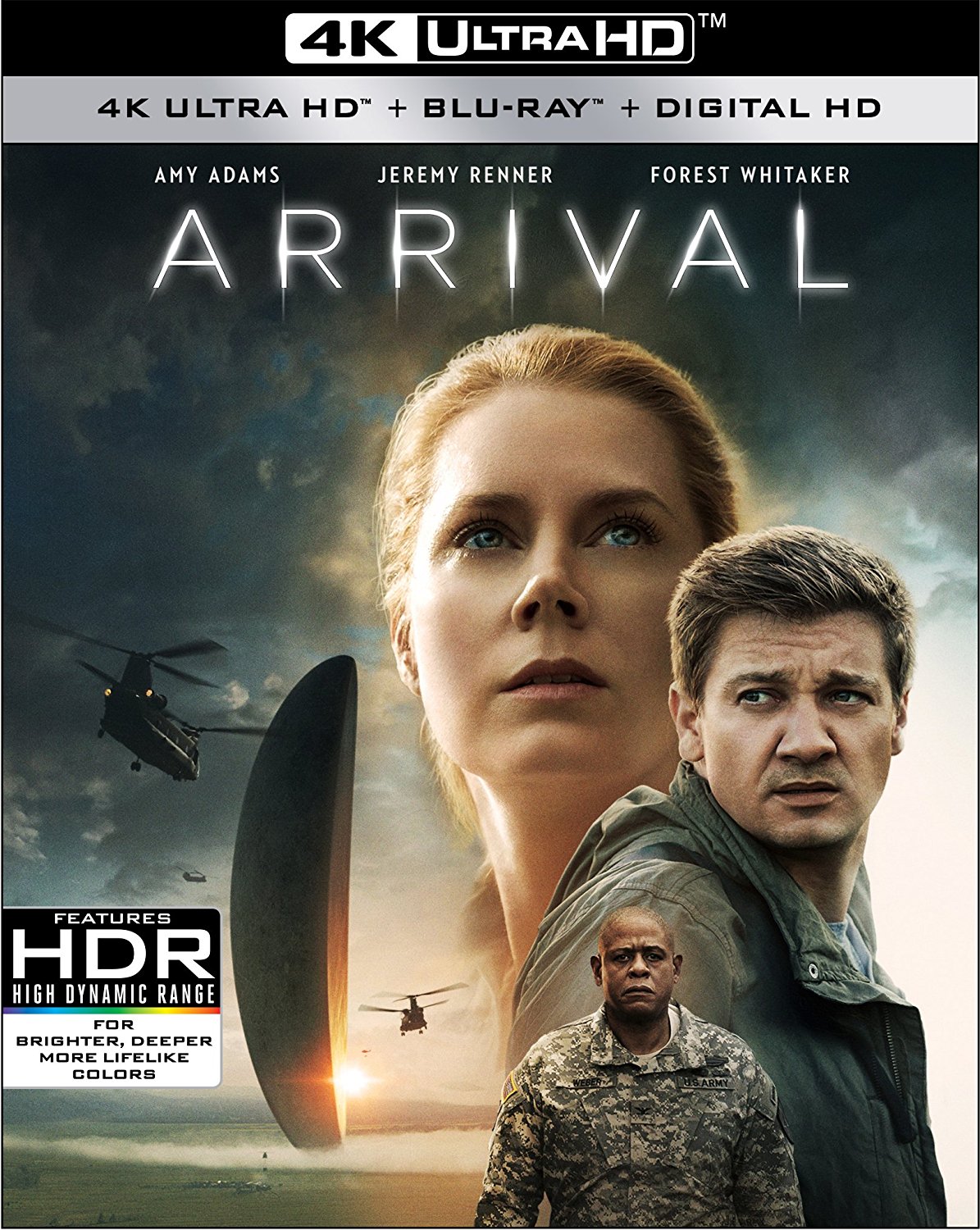