Justin Kurzel’s Assassin’s Creed is spottily written and requires a leap of faith from a willing audience to enjoy its characters and narrative.

Feature films derived from video games don’t have a reputation of very solid critical or economic success (witness last year’s Warcraft which bombed here though it did well enough in some other parts of the world). Justin Kurzel’s Assassin’s Creed goes out of its way to add some luster to its video game origins: award-winning actors in many key roles, an expensive production ($125 million budget), and an age-old story of good and evil pitting the Assassins against the Knights Templar. But despite the fancy trappings, the movie is more visual spectacle than intellectual enterprise, its plotting full of holes and its character motivations murky and requiring a great leap of faith on the part of the viewer. For some that might be enough, but Assassin’s Creed falls a bit short of real success.

Rescued from a lethal injection execution, killer Cal Lynch (Michael Fassbender) is brought to Abstergo Industries by its CEO Rikkin (Jeremy Irons) and his scientist daughter Sofia (Marion Cotillard). They’re on the trail of the Apple of Eden, the legendary artifact which has power over individual free will. Cal learns that he’s descended from a 15th century Spanish warrior Aguilar who was the last known holder of the Apple, and Sofia has an invention called an animas which can transport a person through his DNA back through time to share experiences with his ancestors. It’s hoped that by Cal’s undergoing the painful journey back through time while repeating Aguilar’s actions, he can somehow find a key to unlocking the whereabouts of the precious object.

The screenplay by Michael Lesslie, Adam Cooper, and Bill Collage doesn’t make things particularly easy for a non-gamer to get quickly cued in to the vagaries of the set-up. A prologue establishes the character of Aguilar and his commitment fighting against the power mad Templar Order, and then we’re cast five centuries later with Aguilar’s distant relation as a child witnessing his mother’s (Essie Davis) death before finally landing thirty more years into the future to see Cal on Death Row. Once we get to Abstergo Industries and Cal begins the first of three of his regressions into the past to gain clues to the whereabouts of the Apple, we’re treated to a series of wildly imaginative sights and sounds as director Justin Kurzel beautifully juxtaposes Cal in the animas chamber reenacting the fights and escapes of Aguilar as the events in both places get either superimposed or jump cut in stunning visual montages. The combat scenes are impressive, and an extended parkour-rich escape across and down Seville rooftops, clothes lines, and alleyways clearly gives an electrifying thrill to the center section of the movie. But the writers have done a poor job filling in the blanks about the differences between the Assassins and the Templars, nor have they set up well the climactic revolt of the Abstergo Industries inmates against the guards in charge of the facility which seems to materialize out of nowhere. The coda seems to suggest a sequel to come, but judging from box-office receipts (like Warcraft, the movie did better overseas then it did here but still not quite well enough to break even), that doesn’t seem like a possibility.

Michael Fassbender has put his heart and soul into this project; he’s a producer of the film as well as the star and hardest working performer in the movie, and his commitment to making his two very different characters meld into one by the end seems total if a trifle far-fetched (do his three remissive journeys to the past really turn him into a great warrior or merely reawaken the warrior inside which was forged in his DNA? The film doesn’t make that clear). Marion Cotillard is very earnest and anxious as Sofia, but the role isn’t really developed enough to give this Oscar-winning actress much to really sink her teeth into. Jeremy Irons, another Oscar-winner, likewise provides a couple of droll remarks amid a performance that he can basically walk through with his eyes closed. Brendan Gleeson has a couple of scenes as Cal’s psychotic father, but three other inmates of Abstergo Industries establish good characters who are then woefully underused: Michael K. Williams as Moussa, Callum Turner as Nathan, and Ariane Labed as Maria. Javier Gutiérrez makes for an imposing Torquemada.

The 2.39:1 theatrical aspect ratio is presented in 2160p resolution using the HEVC codec. While the meshing of live action and CG effects sometimes softens the overall image (and there is also a fair amount of dust and fog in the fight scenes to obscure razor-sharp clarity), close-ups reveal plenty of detail in facial features, costumes, and other intricacies of the production. Color is solid and specifically attuned to the time periods being shown: overriding browns and reds for the 1492 Spanish sequences, cool blues and greens for the Abstergo Industries sequences, and black levels that are spot-on. The use of HDR is quite spectacular without being overdone. Highlights of white light spilling into darkened rooms and golden-hued skies tipped with silver make impressive visual displays, and even the white subtitles have a crisp brightness that makes them stand out without being overly distracting. The movie has been divided into 24 chapters.

The Dolby Atmos sound mix (the Dolby TrueHD 7.1 core was decoded by my equipment) is extremely loud (even the menu music is thundering), and it’s recommended that to prevent potential equipment damage, you decrease the volume by a few clicks. Dialogue has been masterfully recorded and mostly been placed in the center channel though there are some very effective moments where voices in other parts of the soundstage widen the listening field considerably. Jed Kurzel’s bombastic score gets the full treatment in the fronts and rears, and the split sound effects couldn’t be more immersive with pans across and through the soundstage to great effect.

There are no bonus features on the UHD disc. The enclosed Blu-ray disc contains all of the package’s bonus material.

Conversations with Justin Kurzel (20:22, HD): the director speaks for about five minutes each with four of his collaborators about each man’s work on the film: composer Jed Kurzel, editor Christopher Tellefsen, special effects coordinator Ged Wright, and screenwriter Michael Lesslie. Each conversation may be watched separately or in montage.

Deleted Scenes Conversation (22:23, HD): director Justin Kurzel and film editor Christopher Tellefsen discuss the rationale behind each of the major sequence eliminations in the movie.

Theatrical Trailers (4:22, HD): two trailers may be watched together or separately.

Blu-ray/Digital Copy: disc and code sheet in the case.

Justin Kurzel’s Assassin’s Creed is spottily written and requires a leap of faith from a willing audience to enjoy its characters and narrative, but the production is a handsome one, and the UHD release offers reference quality picture and sound for those in the mood for a video game feature film adaptation. 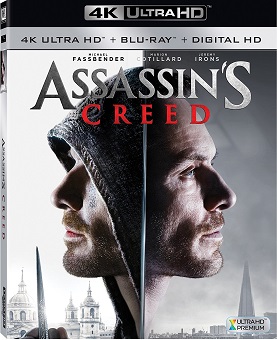