Forum List What's new Dark Style Change width
Log in Register
What's new Search
Menu
Log in
Register
Navigation
Install the app
More options
Dark Style
Close Menu
Posted on March 23, 2017 by Matt Hough
You are using an out of date browser. It may not display this or other websites correctly.
You should upgrade or use an alternative browser.
3D adventure tale is rather tame but worth a peep. 3 Stars

September Storm may not qualify as one of the great 3D adventures, but it’s a pleasure to welcome this beautifully restored 3D film back among its three dimensional siblings.

Byron Haskin’s September Storm is yet another average feature film enlivened somewhat by the use of 3D. Rather stodgily written and directed, the film does make nimble use of location photography off Majorca and offers pleasing actors even if the strained drama shortchanges their abilities. Restored beautifully by the 3-D Film Archive, September Storm may not go down in the annals as one of the great 3D features, but it’s certainly nice to have it restored so beautifully and available now for viewing in either 3D or 2D.

Joe Balfour (Mark Stevens) and his partner Ernie Williams (Robert Strauss) are adventurers who have stumbled on a prize catch: a sunken skiff loaded with Spanish doubloons off the coast of Spain, but they need a boat and underwater diving gear in order to retrieve it. Manuel del Rio Montoya (Asher Dann) is a deck hand caring for The Swan while its owner Rene Le Clere (Jean Pierre Kerien) is in Paris for business, but in trying to woo beautiful model Anne Traymore (Joanne Dru), he has given the impression that he owns the craft and equipment. Joe and Ernie draw up an agreement with Manuel and Anne to share in the profits if they’ll assist with the gold recovery, and they agree though Manuel is worried about getting back before his employer returns in three weeks. Though they don’t know it yet, the quartet is going to run into both natural and man-made disasters that may prevent them from retrieving their prize.

W.R. Burnett has tried to load his screenplay with plenty of conflicts to keep the narrative pushing ever forward, but the story often stubbornly refuses to come to life, and the perils the four encounter (including one of the phoniest looking sharks in the history of movies and a Portuguese man o’ war that should have been more sinister than it turns out to be) never ramp up great amounts of tension though, to be fair, the storm sequence suggested by the movie’s title is the most impressive scene action-wise in the movie (even with an obvious miniature for the boat in long shots) and the underwater photography works just fine. Director Byron Haskin makes sure the beauties of Majorca aren’t missed by the Cinemascope photography, but he can’t do much to work up chemistry or erotic heat between his leading lady and the three men who vie for her attention (it’s almost as if the movie is afraid to go there), and suggestions of a potential rape in the offing never really materialize. There is also an extended flamenco dance sequence plopped right into the middle of the movie which fails to make the best use of 3D, director Haskin opting to film either above the waists of the dancers or showing their feet without allowing full body movements to capture our attention and impress us. At its climax, he does go to full figure framing, but the feet get frustratingly cut off at the bottom of the frame.

Top-billed Joanne Dru seems maybe a decade too old for her role as a top fashion model though she exudes a certain glamour in the movie and looks great in a swimsuit (a funny moment occurs when she boards the sailboat with six pieces of luggage as if she were going to need lots of daywear and night clothes for three weeks at sea doing grunt work). Mark Stevens brings his usual professional ease and slyness to the role of Joe Balfour and keeps our suspicions peaked as to his being a good guy or a bad guy. Robert Strauss gets thrown the comic sidekick role with a fondness for alcohol, one with possibly some hidden agendas including a crush on the leading lady. Asher Dann is fine as the youthfully impetuous Manuel, but Jean Pierre Kerien is hopelessly amateurish as the rich Rene Le Clere.

The film is framed at 2.39:1 and is presented in 1080p using the MVC/AVC codec. The 3-D Film Archive has done a masterful job restoring the movie’s color even if there are some occasional variances in flesh tones from one scene to the next (the blues of the skies and Mediterranean, however, sparkle miraculously), and sharpness likewise varies a bit along with black levels. But there are no problems at all with age-related artifacts like scratches or debris, the image looking admirably pristine with the original film grain retained. The movie has been divided into 10 chapters.

3D adds some pleasing and most welcome depth to the image (more on land than underwater) and occasional shots impress with objects and people located on multiple planes. The best forward projection is on the menu page where the film’s title pops right out from the screen. Some spear guns also protrude outward at a climactic moment during the film.

The DTS-HD Master Audio 2.0 sound mix is mono for the feature film and has been superbly cleaned up with no age-related problems with hiss, pops, or crackle. Dialogue has been expertly recorded and is mixed well with the music by Edward L. Alperson Jr. and Raoul Kraushaar and the engaging sound effects. The song “Be by You” is given the stereo treatment for playing over the restoration credits at the end of the film, and it features superb fidelity and a very catchy rhythm.

Lew Gilbert Interview (2:31, 2D, HD): the director of the 3D Harmony Lane is interviewed by Tony Sloman in 1995 and recalls an incident watching the short in 2D at a local cinema.

September Storm may not qualify as one of the great 3D adventures, but it’s a pleasure to welcome this beautifully restored 3D film back among its three-dimensional siblings. Kudos to the 3-D Film Archive and Kino Lorber for making it available once again for viewing in tip-top condition.

Thankfully KINO have not limited this 3D gem to region A only and we really enjoyed it.

Also included the legendary 1953 British 3D variety musical HARMONY LANE featuring some nice British style hoofing and turns including Max Bygraves also stood next to the forerunner of the analogue synthesiser which coincidentally I own here. Worked with Max way back and it was nice to see this particularly in 3D along with the Synth. You just couldn't write it!

A wonderful job bringing this to 3D and so many thanks to all involved. 10/10

3D Projectionist said:
Thankfully KINO have not limited this 3D gem to region A only and we really enjoyed it.
Click to expand...

For what it's worth, Kino did not choose to limit any of their other titles to region A out of spite or maliciousness. Kino is a licensee that gets distribution rights from the studio. For certain titles, the studio does not make international rights available, and requires that Kino region lock the discs. I understand the frustration, but the blame belongs with the entity who owns the title, not the label releasing the disc.

I mentioned this in another thread, but I think it bears repeating - for collectors of 3D movies and other niche titles, a region-free modded Blu-ray player is one of the best investments you can make. It's possible to get them for under $200; one doesn't have to buy a $500 Oppo player to go region free. Though the vast majority of discs I own are from the region I live in, some of the most important titles in my collection are from other regions. With support for 3D on disc declining, and disc releases declining overall, there's a lot of stuff coming out in different territories that aren't getting equal worldwide releases. The only way I know to have access to all of the titles I want is being region-free.

Josh Steinberg said:
For what it's worth, Kino did not choose to limit any of their other titles to region A out of spite or maliciousness. Kino is a licensee that gets distribution rights from the studio. For certain titles, the studio does not make international rights available, and requires that Kino region lock the discs. I understand the frustration, but the blame belongs with the entity who owns the title, not the label releasing the disc.
Click to expand...

What I don't get is that these studios must be fully cognizant of our ability to purchase inexpensive region-free players, and can often acquire European editions of the their releases for less than what they would cost in the U.S. I have spent -- and will continue to spend -- a lot of money buying titles from other regions, none of which is going to profit domestic distributors. I continue to view this region-locked bullshit as exactly that.

I just think it limits sales which is working against the owner every time they install it to a retail disc, just my modest view.

September Storm.. What a superb job one and all!

Yeah, pricing has been dropping for a while now. 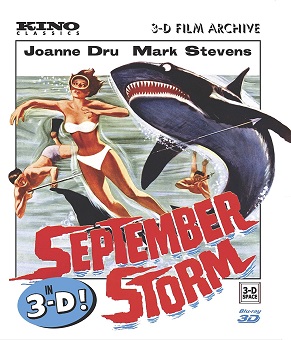