Posted on August 12, 2017 by Matt Hough
Uneven but entertaining western melodrama from the Golden Age 3.5 Stars

King Vidor’s Duel in the Sun is one of the more notorious epics of Hollywood’s Golden Age, and Kino Lorber’s Studio Classics line of releases brings the roadshow edition of this classic with most of its Technicolor splendor intact to high definition with some informative bonus material.

After winning back-to-back Oscars for producing Gone with the Wind and Rebecca, producer David Selznick tasked himself with two objectives: make a film that would surpass Gone with the Wind in scope and popularity and win for the woman with whom he was besotted a second Academy Award. King Vidor’s Duel in the Sun was the production he placed all of his hopes on. It’s big in every way possible, both in the size and splendor of its production and in its award-winning cast, but the movie is often too mammoth for the relatively small story it’s choosing to tell, and its extreme length isn’t supported by the narrative contained within it.

After the tragic deaths of her father (Herbert Marshall) and mother (Tilly Losch), teenaged Pearl Chavez (Jennifer Jones) is taken in by her cousin Laura Bell McCanles (Lillian Gish), wife of the wealthiest land and livestock baron in Texas Senator Jackson McCanles (Lionel Barrymore). His million acre land empire Spanish Bit is home to thousands of heads of cattle and horses, but the activities of his sons occupy a lot more of his attention. Older son Jesse (Joseph Cotton), trained as a lawyer, is eager to welcome the coming railroad to the area, hoping its arrival will expand the town and bring civilization to the mostly wild western countryside while younger son Lewton (Gregory Peck), a spoiled and headstrong cowpoke, sides with his father in decrying any changes to the region and is willing to do anything to stop its growth. Both young men fall for Pearl, but while Jesse wants to make a lady of the uneducated, eager-to-please young girl, Lewt is more interested in her lusty side, constantly goading her into compromising sexual situations which make his father despise having her around and disappoint Jesse with her giving in to Lewt’s temptations.

Overwrought is probably the kindest word to apply to producer David O. Selznick’s screenplay, suggested by a novel by Niven Busch which was originally adapted by Oliver H. P. Garrett. Emotions among several of the key characters run high throughout the movie making this a melodrama extreme. Selznick’s script never seems to solve the problems with the character of Pearl whose on again/off again feelings for Lewt regularly inspire emotional whiplash in the viewer. Despite her young age and an often stated eagerness to be good, Pearl gives in time and again to her baser instincts even to the last, sometimes a difficult pill to swallow for audiences who expect her at some point to learn from her mistakes and move on to find happiness elsewhere (she does so in the book; not so here). Lewt and the Senator likewise display high-pitched, racially prejudicial emotions throughout though they’re more consistently intoned despite their obnoxiousness. But the two love triangles at the center of the movie (after Jesse moves away, Pearl takes up with straw boss Sam Pierce – Charles Bickford – much to Lewt’s outrage) isn’t really enough to sustain a two-plus hour movie, and the railroad/immigrant subplot that so riles the Senator isn’t given enough time to be fully developed either leaving us with a huge production with quite a few high spots but not a completely satisfying through-line.

The size and spectacle of the movie is never in doubt. This roadshow edition includes an almost ten-minute musical prelude with themes compiled rather haphazardly from Dimitri Tiomkin’s score followed by a bizarre two-minute overture with flowery spoken interludes in verbiage that had to have come from the pen of David Selznick. The number of extras seems limitless: hundreds of ranchers, townsfolk, and cavalry take part in the production, and the herds of cattle and horses are vast and always impressive. Director King Vidor (along with several others who were brought in during the troubled shoot) certainly gives viewers an eyeful with some of the vastest panoramas seen in a film: the call-to-arms that finds hundreds of ranchers and cowhands rushing to defend Spanish Bit is captured in a stunning long shot of cascading hordes storming the prairie from all directions that inspires real awe, and in the memory of some compositions in Gone with the Wind, there are black silhouettes against an orange sky that are breathtaking in Technicolor. Smaller moments are also beautifully directed: Lewt’s thrilling bronco busting sequence, a wild race across the plains with Pearl on a runaway pinto and Lewt trailing after her, and a pan through a huge barbecue celebration where we get to hear bits and snatches of gossip and small talk that clues us in on the latest developments in the McCanles family disputes. But there’s no excusing the ludicrously staged, hard-breathing climax that pits the feverish lovers against one another while still proclaiming their heated passions.

Jennifer Jones earned top billing and an Oscar nomination for her against-type portrayal of the fiery Pearl Chavez, but while the actress was only twenty-six at the time of filming, her free flowing hairstyles and voluptuous wardrobe delineate a woman much older than Pearl’s seventeen years (only at the barbecue with her hair tamed and her figure in a modest white gown does the actress appear younger than her years). She does what she can with an unevenly written part and does earn a bit of sympathy for her inability to resist temptations even after being stung by them time and again. Gregory Peck was likewise cast against type as the hedonistic, untamed Lewt having previously played priests and earnest, good men (and likely would have earned an Oscar nomination for this film had he not already appeared the same year in the big hit The Yearling which did earn him a nomination). Joseph Cotton plays another of his well-meaning, kindly gentlemen as Jesse, and Lionel Barrymore bellows with the best of them (without much shading) as the ornery Senator. Lillian Gish is fragile and delicately beautiful as the emotionally abused Laura Belle (which brought her an Oscar nomination), and Butterfly McQueen is around to provide stereotypical good humor as the ditzy maid Vashti. In smaller roles, Scott McKay is very good as the sneering ranch foreman Sid, Charles Bickford gets a few moments to impress as Pearl’s intended Sam Pierce, Walter Huston steals all his scenes as the region’s itinerant preacher, and Herbert Marshall gets the show started with classy finesse as Pearl’s quietly jealous father.

The film’s 1.37:1 theatrical aspect ratio is rendered in this 1080p transfer using the AVC codec. At its best, images are sharp, detailed, and deeply colorful, and generally the color is under control despite its rich saturation levels. But there are several moments where registration problems plague the image leaving it soft and even occasionally jumpy, and there are sporadic problems with digital contouring in an early shot, some missing frames, and some dust specks here and there. Black levels can be nicely deep, but they can also disappoint in other scenes where they’re closer to gray than black. The movie has been divided into 8 chapters.

The DTS-HD Master Audio 2.0 mono sound mix is typical for its era but seems a little flat in comparison to the spectacle which is unfolding before our eyes. Dialogue has been well recorded and has been mixed professionally with the numerous atmospheric effects of the film and composer Dimitri Tiomkin’s celebrated (but oddly not Oscar nominated) score. No age-related problems with hiss, crackle, flutter, or hum are present.

King Vidor’s Duel in the Sun is one of the more notorious epics of Hollywood’s Golden Age, and Kino Lorber’s Studio Classics line of releases brings the roadshow edition of this classic with most of its Technicolor splendor intact to high definition with some informative bonus material. 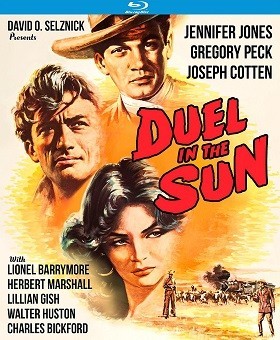