A return to the screen after fifteen years of beloved comedy veteran Goldie Hawn and the presence of known comedy entities like Amy Schumer, Joan Cusack, and Wanda Sykes give the promise of something wonderful in Jonathan Levine’s Snatched, but it’s a promise that’s only fitfully fulfilled.

A return to the screen after fifteen years of beloved comedy veteran Goldie Hawn and the presence of known comedy entities like Amy Schumer, Joan Cusack, and Wanda Sykes give the promise of something wonderful in Jonathan Levine’s Snatched, but it’s a promise that’s only fitfully fulfilled. This action comedy once again presents a cast of dimwitted characters up against lethal forces out for blood in a foreign country, but the tiresome nature of the clueless, one-note personalities can’t even make a brief ninety-minute running time viable. There are some bright bits here and there and one or two surprises worth a few laughs, but most of this instantly forgettable comedy is second-rate fare.

Aimless thirty-something loser Emily Middleton (Amy Schumer) has no peers who would dare go with her on a nonrefundable trip to Ecuador, so she reluctantly offers the extra ticket to her mother Linda (Goldie Hawn) who reluctantly agrees to be her plus-one. Once there, Linda just wants to relax and read her book, but Emily is ready for adventure which comes calling in the person of handsome Brit James (Tom Bateman) who sweeps Emily off her feet their first night together and promises to take her and her mother on an exciting expedition the next morning. During their trip, however, James’ jeep is wrecked, and the two women are taken hostage by Colombian slave trader Morgado (Oscar Jaenada) who demands $150,000 ransom from agoraphobic son/brother Jeffrey (Ike Barinholtz). They manage to escape but in doing so kill both a cousin and Morgado’s son in their desperation making him determined to stop at nothing to exact revenge while the two women stumble and bumble their way through the Amazon trying to get back to the Embassy in Bogota.

Katie Dippold’s script and Jonathan Levine’s direction could have created a raw, rather savage black comedy filled with danger and death, but the duo opts instead for the featherbrained fallback narrative of two airheaded women without a lick of common sense between them trying to stay alive in one of the most ferocious places on Earth (arguing with each other all along the way constantly forgetting they’re being tracked by a man out to murder them). So, despite the men trailing them that appear cutthroat and barbaric and the accidental killings of two of the men on their case, there is never a real sense of danger or mortality, and the deaths, all happening completely by accident, aren’t really funny. Along the way, the women get helped by three delightful additions to the cast and the only real successes in the movie: Christopher Meloni as an Indiana Jones-style adventurer Roger Simmons who offers to guide the ladies away from danger and get them to Bogota, and by a “platonic” couple Ruth (Wanda Sykes) and Barb (Joan Cusack) whom they meet first in Ecuador to annoying effect but who later in Bogota band with Emily on a very funny covert mission to rescue Linda who had at this point been recaptured (watching Barb’s “special ops” fleetness and expertise is completely hilarious). All offer adept characterizations with their limited screen time and etch wonderful character portraits that are far more memorable than the two leading ladies who fall back on overly familiar comic shtick that has more than worn out its welcome.

We’re very familiar with Amy Schumer’s Emily Middleton’s character: a clueless thirty-something Generation X-er interested only in tweeting, drinking, and sexual encounters, and her lack of insight into herself, her limitations and her lack of ambition make her a difficult protagonist to care about. Goldie Hawn’s Linda, the cat-loving and child-smothering kind of mom who complains she never sees her children when one lives with her and the other was there three weeks ago, likewise earns some disdain despite her good intentions. But both coast through the film on the good graces earned from years of entertaining us with better material. Tom Bateman as the charming James is a dreamboat who should throw out warning signals to anyone with a scintilla of common sense, but he abruptly leaves the movie at the half-hour point and doesn’t return until the end. Bashir Salahuddin has some funny moments as the U.S. Embassy official harassed by the frantic Jeffrey Middleton played with provocative ebullience by Ike Barinholtz. Wanda Sykes but especially Joan Cusack (completely mute throughout the film) and Christopher Meloni really earn their laurels for service above and beyond the call of duty with their endearing characters.

The film’s 2.40:1 theatrical aspect ratio is faithfully rendered in 2160p resolution using the HEVC codec. Sharpness is excellent (wonderful enough to see the phony CG special effects used in the tapeworm sequence and with many of the computer generated backgrounds in the jungle), and color is rich and full with outstanding contrast generated by expert use of HDR to offer near-blinding bright tropical highlights on occasion (sunlight through a door is eye-searing at one point). The movie has been divided into 24 chapters.

The DTS-HD Master Audio 7.1 sound mix offers a full aural palette for the listener. Dialogue has been well recorded and has been placed in the center channel. Ambient effects have been worked expertly into the mix and in certain locales (the middle of the jungle, for example) convince one that he’s standing in the midst of the film’s setting. The music score by Chris Bacon and Theodore Shapiro fills the listening environment with surround placements in all available channels.

Audio Commentary: director Jonathan Levine provides lots of filming anecdotes as he guides us through the movie with heaps of praise for all of the before and behind the camera personnel. This is the only bonus feature offered on the UHD disc.

The other bonus materials (along with the commentary) are all contained on the enclosed Blu-ray disc:

Deleted Scenes (12:43, HD): ten scenes may be viewed in montage or separately.

Extended/Alternate Scenes (14:08, HD): five scenes may be watched together or separately.

Theatrical Trailers (4:28, HD): the theatrical trailer and the red band trailer may be viewed together or separately.

Snatched is a somewhat disappointing action comedy trading on the overly familiar comic personas of its leading ladies and offering only sporadic fresh comic touches to its mostly forgettable comedy brew. The UHD release, however, does offer superb sights and sounds for the home theater environment. 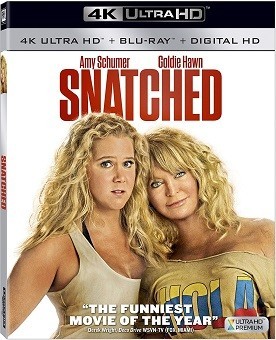