Posted on August 10, 2017 by Matt Hough
A new cast but more of the same kind of slapstick turmoil 3 Stars

The law of diminishing returns usually comes to most film series, and it’s no different with David Bowers’ The Diary of a Wimpy Kid: The Long Haul, the fourth in the series of films based on the comic adolescent cartoon novels by Jeff Kinney.

The law of diminishing returns usually comes to most film series, and it’s no different with David Bowers’ The Diary of a Wimpy Kid: The Long Haul, the fourth in the series of films based on the comic adolescent cartoon novels by Jeff Kinney. There’s a new cast this time around, the children from the first three films having aged out of their roles, but it isn’t the newcomers who are the real problem. More, it’s a lack of invention present in the set-ups and executions of these adventures of a pre-teen who never seems to catch a break. Somewhere along the line, everyone’s gotten so slow and dumb that their catastrophes, and there are plenty of them, cease to be fun and instead seem only lame and a bit desperate.

Put upon twelve-year old Greg Heffley (Jason Drucker), already mortified when a picture of him with a diaper on his hand goes viral, is further tormented when his mother (Alicia Silverstone) announces a four-day road trip to her grandma’s house to celebrate her 90th birthday dragging along the entire family including Dad (Tom Everett Scott), hateful brother Rodrick (Charlie Wright), and baby brother Manny (Dylan and Wyatt Walters). Even worse, she’s declared the vacation a “no devices” trip so there is no escape from parents or siblings on his phone or iPad. The only bright possibility is the chance of sneaking away to an electronic gaming expo to hopefully meet YouTube sensation Mac Digby (Joshua Hoover) and possibly get a video shot with him that will replace his “Diaper Hands” ignominy with something infinitely cooler.

Resembling a National Lampoon Vacation film more than a Wimpy Kid movie, author Jeff Kinney admitted that the original book, the ninth in his eleven book series (thus far), was written with a cinematic adaptation in mind. Thus, the road trip scenario (the screenplay co-written with director David Bowers) opens up lots of possibilities for one calamity after another to befall not just Greg but his entire family. In order for these mishaps to occur to all of them, the authors must make both the children and the adults dumber than dirt and absurdly slow to react to any oncoming trouble, and most of the trouble is predictable and not very funny. Along with the expected poop, pee, and vomit jokes, there are tons of slapstick situations where the family gets immersed in seagull droppings and muddy refuse. There’s a running gag with a family Greg nicknames “The Beardos” that is beyond ridiculous as this same hillbilly-like family keeps turning up at every port of call on the Heffley’s itinerary. Director Bowers includes paeans to Hitchcock’s Psycho and The Birds though apart from those various shots stolen from those films, the rest of the movie gets shot in meat-and-potatoes style without much distinction. There are some cute moments with a piglet, and it’s a relief to see someone other than Greg sometimes be the butt of the continual misfortune that follows him around so vociferously. But to see everyone so wimpy and stupid gets to be a drag after a while, and apart from little kids who will likely enjoy the mayhem and the occasional animated inserts which disappear through much of the film after seeming to be a prominent part of the movie in the early going, adults will find these adventures tamer and lamer than they should have been.

Jason Drucker ably fills the nerdy Greg shoes worn by Zachary Gordon in the first three films. He’s likable enough and never spiteful, important that he retain his innocence despite everything that happens to him. Charlie Wright is a much dumber but less bullying older brother Rodrick than Devon Bostick was in the first three films. Alicia Silverstone and Tom Everett Scott are decent white bread replacements for the original Rachael Harris and Steve Zahn without doing anything significantly memorable in this adventure (Silverstone’s mother is mostly a nag and Scott’s father is covertly trying to carry on office business away from the office and without his wife finding out). Owen Asztalos, the new Rowley, has very little to do in this movie since he’s not a part of the road trip itself. Chris Coppola casts a malicious presence as the threatening Mr. Beardo, and Danny Vinson steals his scenes as the hog barker who bestows on baby Manny the prize of a squealing piglet.

The film’s original theatrical aspect ratio of 2.39:1 is faithfully reproduced in this 1080p transfer using the AVC codec. Bright and shiny like a television sitcom, the transfer is sharp and clear throughout with rich and accurate color and believable skin tones. Contrast has been expertly applied for a first-rate picture. The movie has been divided into 24 chapters.

The DTS-HD Master Audio 7.1 sound mix only occasionally makes full use of the entire available soundfield. Dialogue has been well recorded and has been placed in the center channel. Atmospheric effects get some discrete placements in the fronts and rears but far less than one might expect given the number of mishaps and problems the family experiences. Edward Shearmur’s background score and some hip-hop tunes get a nice spread in the available channels and provide the best surround experiences in the transfer.

Greg Heffley’s 10 Rules for the Perfect Road Trip (3:03, HD): ten do’s and don’t’s to remember about making the most of a road trip, narrated by actor Jason Drucker.

Road Games (3:53, HD): four real games that can be played on a family road trip narrated by Jason Drucker.

Learn to Draw (14:26, HD): author/illustrator Jeff Kinney gives instructions on how to draw five characters from his book: Greg, Rodrick, Manny, Rowley, and the pig.

A Decade of Wimpy Fun (13:26, HD): author Jeff Kinney describes the incredible journey his Wimpy Kid series of books have led him on, both internationally promoting the eleven books he’s written thus far and in making the films. Also commenting on his books are actors Jason Drucker, Owen Asztalos, Tom Everett Scott, and Alicia Silverstone and director David Bowers and producers Nina Jacobson and Brad Simpson.

Bloopers and Deleted Scenes (4:34, HD): combined in one montage.

Deleted Animation (0:42 each, HD): two scenes which must be viewed separately.

Art Gallery: twenty-five stills and behind-the-scenes shots which can be viewed manually or automatically.

Diary of a Wimpy Kid: The Long Haul is the weakest of the four Wimpy Kids franchise (and it did less box-office business than the prior three movies), and while there isn’t a great amount of enjoyment to be had here for adults, younger members of the family may enjoy seeing some favorite moments from the book appearing on the screen. 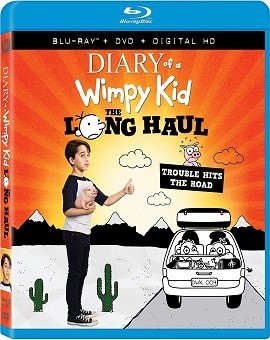