“An interesting failure” is how a fellow Home Theater Forum member Jake Lipson described Downsizing. And that’s a fair assessment. There are wonderful ideas at play and a unique perspective in exploring those ideas. But the film falters in its conceptual approach. There are many facets to Alexander Payne’s examination and exploration of the downsizing phenomena and its repercussions. But with so much introduced, the story meanders too much trying to touch upon them all. It also shifts gears a couple of times. That’s a welcome choice, but coupled with its shifting ideas, it ends up feeling unfocused.

“Do you understand that you will undergo the permanent and irreversible medical procedure commonly known as downsizing, and that your bodies will be approximately point zero three six four percent of their current mass and volume?”

A technological breakthrough that allows humans to be irreversibly downsized to a small fraction of their original size. The implications are enormous. The reduction in waste produced, the reduction in the amount needed to feed and water humans could yield vital environmental impacts. The value of a dollar goes much further in miniature. Sell off your middle-class home, get small, and buy a small mansion, living off your excess balance in comfort for the rest of your life. For Paul (Matt Damon) and Audrey Safranek (Kristen Wiig), it’s the answer to their financial woes. But when Audrey backs out of the procedure to be downsized at the last moment, Paul finds himself tiny and alone. And when his no ex-wife takes all his money, he’s poor and living in a tiny living space, with a crummy job. He went from bad to worse, only smaller. But he meets several people who will change his life.

Downsizing treats a fantastic concept with a serious mind and attempts to dissect what it could, or would, all mean. It’s a film that has something to say. It wants seriously to examine the socio-political implications in macro, while following the journey of an ordinary man as he reacts to it all the scientific breakthroughs, too. But the film bites off more than it can chew. Besides the ramifications of humans able to miniaturize themselves, and Safranek’s crumbled marriage to Audrey and his lost sense of place in the world, the film takes on much more. It introduced the inevitability of the class divide, the ultimate meaninglessness of material goods, the woes of climate change, and what it means to survive as a species. All interesting concepts, but weaving all this in a patiently paced 2 hour, 15 minute film.

Matt Damon is very good here. His second 2017 film where a theme of the socially dispossessed is central (following Suburbicon). He plays an ordinary man, boring really, whose life is shaped not by his ambitions, but rather his limits and reactions to things happening to, and around him. He’s meandering through his own life, and Damon captures that lost soul with a fine sense of compassion and confusion. The standout performance here is Hong Chau. Her arrival in the film about halfway through signals a major shift in the story. It also provides the film with much needed dose of humor as heavier themes are also introduced. Christoph Waltz’s Dusan Mirkovic character, with a light, devil-may-care attitude, is a constant source of enjoyment. Rolf Lassgård‘s Dr. Jorgen Asbjørnsen, the man who discovers the downsizing miracle, is steadfast and serious. He brings a solemn and grounded quality to the proceedings. Kristen Wiig’s unreliable Audrey, the women whose self-interest serves to crush her husband’s faith (and ultimately set him free) is quite understated, but effective. Others in the cast, like Jason Sudeikis, and Udo Keir, and the brief by entertaining appearances by Laura Dern and Neil Patrick Harris, all contribute nicely.

Despite the work of the fine cast, Downsizing feels like a movie was the wrong approach medium. As a feature, its focus is murky. A good deal of time is spent establishing miniaturization as a graspable technological advance, and it’s very well handled. But the trade-off is time taken from director Alexander Payne’s other areas of concern, chiefly the journey of Paul Safranek, commentary on the emptiness of material possession, and the failure of our species to treat each other, or our home, well. Payne is a gifted writer/director. His film’s capture the crumbling and restoration of the human soul. Sideways, his 2004 film, is a personal favorite in how he uses comedy to frame the drama of human pain. But, outside quirks of character and Hong Chau’s comedic presence, the humor is sidelined. Downsizing seems listless as it slowly makes its way to its emotionally important end.

Downsizing was hurt, too, by the misguided marketing campaign that positioned the film as a comedy. We’ve seen the shrunken people concept played for laughs and adventure in films like Honey, I Shrunk the Kids, and The Incredible Shrinking Woman. But not only is Downsizing is not crafted as a comedy. What humor there is, doesn’t come from the miniaturized stature of people. The film is a drama. The journey of a misguided, good-hearted man, looking for meaning in his life in the wrong places. There’s no misadventure, but rather conversation about the decisions people make in their lives. It’s interesting social satire, but this isn’t a film that I imagine, in today’s world, could have recouped its outsized budget ($70MM) as a feature film. Which is why a high-concept short, or limited series (the kind that HBO does so well, or Netflix has pleasingly funded happily,) seems like it could have served Payne’s interesting notions better, giving them space to breathe.

Paramount’s Downsizing is a great looking Blu-ray. Details are sharp, and the digital photography reveals a lean image with a natural flesh tones, warm natural colors (especially during the boat journey later in the film). The color palette hues close to normal, with the occasional burst of white or green where the scene requires. Dusty environments and the poorer neighborhood of the small-world reveal the most visually interesting ideas.

Black levels are good, too.

The 7.1 DTS-HD Master Audio isn’t taxed–it just isn’t that kind of film, but what is asked of the audio is handled well. The noise of crowds, the bumpy bus-ride Damon and Chau take, the busy, commercial spectacle of crowds contemplating what the small community of Leisureland has to offer, are good examples of where the audio steps up nicely, and even Rolfe Kent’s likeable, content score is delightfully used. The party sequence where Damon’s character gets more than he bargained for is a highlight, but you won’t get neighbors complaining if you play this one too loud.

A limited, but not unexpectedly so, collection of special features here. Adding up to around an hour, the crew and cast talk about working with director Alexander Payne, there’s a nearly 15 minute focus on the production, a little about the cast, Damon in particular, and a short piece about the subject of the environment. There’s no real insight here, sadly, or greater evaluation of the film’s more interesting ideas.

There are elements of Downsizing that are fascinating. The serious, methodical examination of downsizing humans, the importance in serving others, treating others with dignity, and not getting caught up in superficial material accumulation are interesting. Matt Damon’s character and his journey of discovery, the collection of interesting characters. All if these things are good elements. But together, arranged and delivered the way they’ve been, feel off. A marketing campaign unfaithful to what the film really was all but doomed the picture. And it’s a shame. But I would say the film is at least worth a rental? Absolutely. But, the film is, in the end, “an interesting failure“.

And the misunderstanding of what this film is continues on FandangoNow.... I understand including Sideways and The Descendants, but Honey I Shrunk the Kids, Multiplicity, The Unsinkable Molly Brown, Shall We Dance? If you continue to scroll, Beetlejuice, Barefoot in the Park, The Awful Truth also appear.

I can't possibly understand the algorhythm used to generate such lists, but maybe they thought they were recommending The Unshrinkable Molly Brown...?

I don't even want to speculate as to why they thought to include The Station Agent!
T 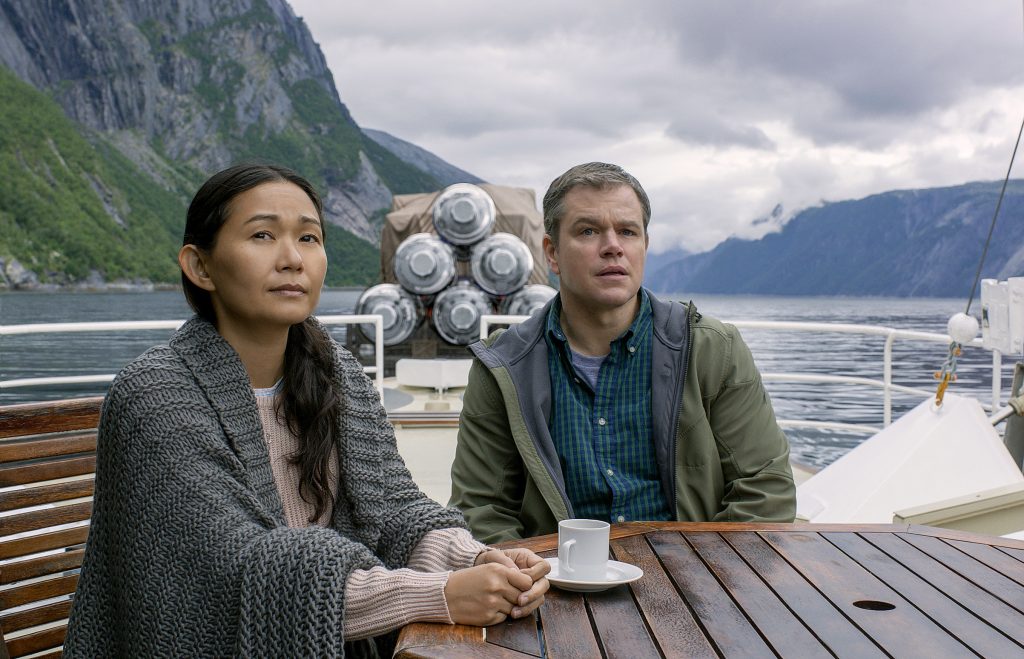 “An interesting failure” is how a fellow Home Theater Forum member Jake Lipson described Downsizing. And that’s a fair assessment. There are wonderful ideas at play and a unique perspective in exploring those ideas. But the film falters in its conceptual approach. There are many facets to Alexander Payne’s examination and exploration of the downsizing phenomena and its repercussions. But with so much introduced, the story meanders too much trying to touch upon them all. It also shifts gears a couple of times. That’s a welcome choice, but coupled with its shifting ideas, it ends up feeling unfocused. 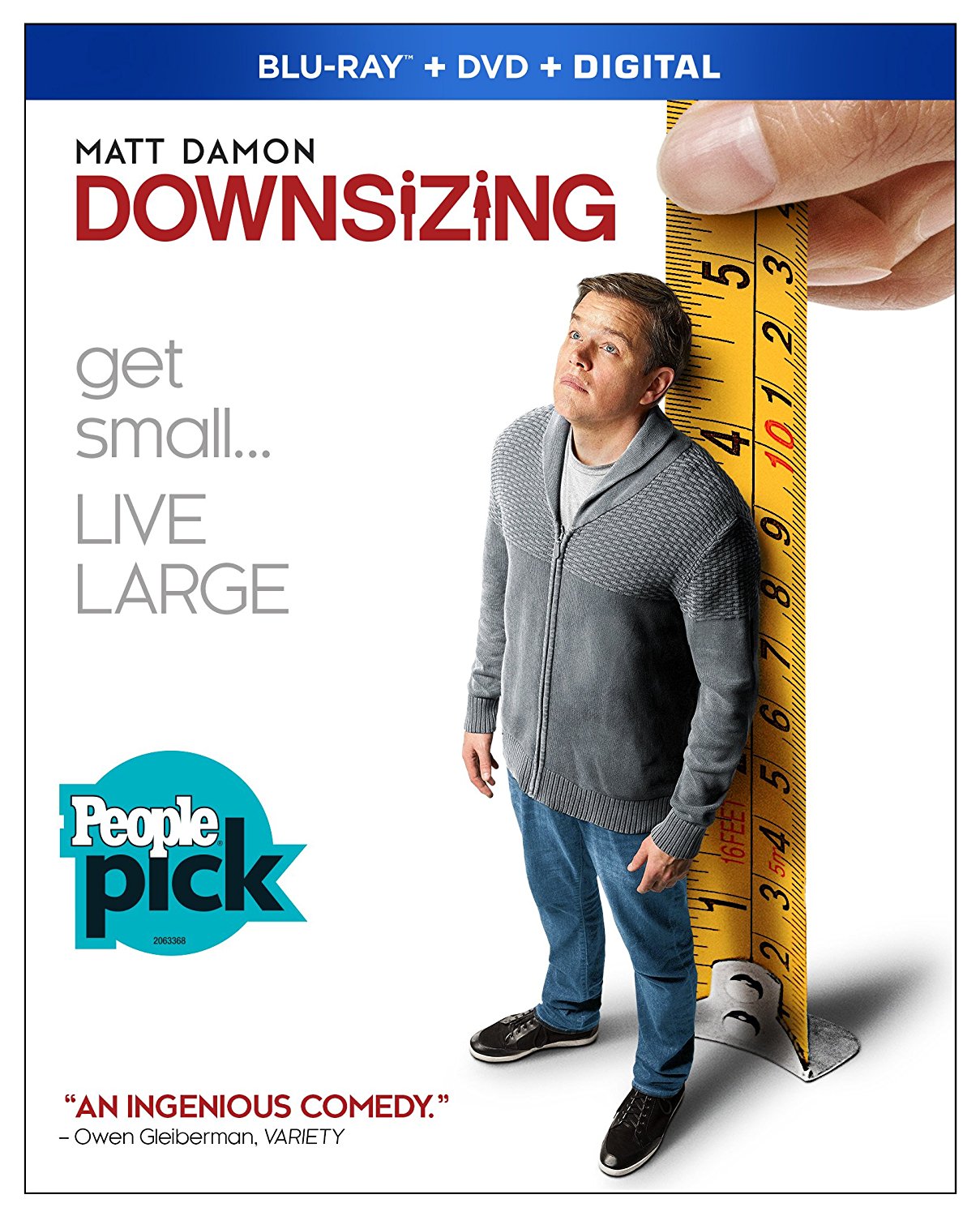