As a finger pointing to the façade of the 1950s as a wholesome, morally unequivocal time, and the fallacy that the socially dispossessed (minorities, etc.,) were foes to decency, Suburbicon is able to make its point. Doing so through the prism of an unrelated crime and inept criminals, produces an uneven experience. The film is ostensibly a tale about an ordinary man who gets in over his head, with violent, deadly, and at times, bizarre results. These are common traits in Coen brother tales (they co-wrote the film,) but Suburbicon doesn’t have enough menace, enough quirk, or not enough working wit, to pull it off cleanly.

Gardner: I’m sorry for his loss.

Hightower: Of life? Yeah, I guess he probably is too.

In a quiet American suburb, Suburbicon, the supposed idyll is disrupted when an African American family moves in-the first family of non-whites to make Suburbicon their home. The underlying intolerance and racism that lay beneath the belly of the town, rearing its grotesque head at the notion of a black family being allowed to live among whites overshadows something more immediate and bloody taking place there. That hidden ugliness emerges when the Lodge family home is broken into by two brutes. They tie up the family and, after taunting them, puts them to sleep. Later, in the hospital, the Lodge’s son, Nicky (Noah Jupe) wakes to find his wheelchair-bound mothers, Rose (Julianne Moore) has died. His father, Gardner Lodge (Matt Damon) is distraught but comforting, and his aunt, twin to his late mother (also Julianne Moore,) decides to move in to help. But the crime isn’t what it first seemed. Soon the layers of deception begin to unravel and the family patriarch, Gardner Lodge, finds he is out of his league.

Written in part by the Coen brothers (along with George Clooney and Grant Heslov,) their DNA is recognizable in Clooney’s latest directorial effort. But the crispness with which the Coen’s craft their films from their own stories, built around quirky characters breaking free from their everyday selves with deadly results, is missing. There are moments of comedic joy that work well, but they are fleeting. The drama is handled well, and the thread of racial intolerance that runs through the film is, independent of the main plot, good. But it is an awkward companion to everything else going on in the film. Provided perhaps to show the hypocrisy of the era, the open mockery of white racial intolerance makes sense, but this thread deserved far more than to relegated to the background and used merely as a mirror to hypocrisy

What does work well is the recreation of the 1950s, the unraveling of the Lodge family, and the performances that work hard to try and make it all work. George Clooney, besides being a fine actor, is a fine director. His Goodnight, and Good Luck is a superbly shot and performed piece of cinema, and a career high point for him. Clooney is able to bring about good performances as he lets his films showcase the performer’s craft. With Suburbicon he succeeds in that yet again, deriving great performances from his central players even while the film itself doesn’t really work.

Matt Damon looks like he’s having good fun as the shady Mr. Lodge, a man both dumb and smart in all the wrong ways. His everyman persona is good cover for the duplicitous, cheating ways of his character. As he loses control, Damon’s performance is able to capture, with dark humor, the ineptitude and surprisingly murderous ways of Mr. Lodge.  Julianne Moore in the brief dual roles is another delight. Beneath the veil of an innocent aunt is an enraptured fool which Moore pulls off with aplomb. Oscar Isaac puts in a brief appearance as a corrupt insurance investigator–and he’s fun in the role. The newcomer neighbors that spark the racist outrage are played earnestly by Karimah Westbrook and Leith M. Burke as Mrs. and Mr. Mayers, along with their son, Andy (who is befriended by Nicky Gardner) played by Tony Espinoza. The remainder of the cast serve the film equally as well

Fine cast aside, Suburbicon has its moments, but lacks the snap and sizzle it needs to pull off its aspirations of replicating the brilliant creations of Coen brothers’ creations.

Suburbicon is a glorious looking film. The Blu-ray from Paramount is exquisite in detail and the 1950s period setting, with modestly muted colors fitting of the era, positively pops. Black levels are wonderfully resolved, flesh tones natural, and contrast excellent. There are no issues or drawbacks to be found in this presentation.

This is a top-notch 5.1 DTS-HD Master Audio offering from Paramount. Crisp dialogue with ample warmth, moments that make use of the surrounds for effect, and a very good use of music come together to make this one a winner. In fact, Alexandre Desplat’s classic score is a highlight. Composer Desplat channels the sounds of Bernard Herrmann’s Hitchcock work to accompany the thriller and give a nod of the hat to the films produced around the era in which this film is set. And it works exceptionally well.

Just about everything of importance is covered, albeit in little depth, in this relatively light collection of special features. The audio commentary is the standout with Clooney, the film’s director and one-quarter of the attributed collection of writers, and co-writer Heslov offering up good insight into the approaches to making the film. The cast, plot and fine score are discussed in the other extras.

Suburbicon succeeds at ratcheting tension, weaving in good doses of drama, and delivering a few appreciated dark humorous moments. However, for what it wants to be-for what it promises-the energy and “zip” is missing. Handsome in production but lacking in potency, the film is saved by a few very good moments and a strong cast delivering strong performances. 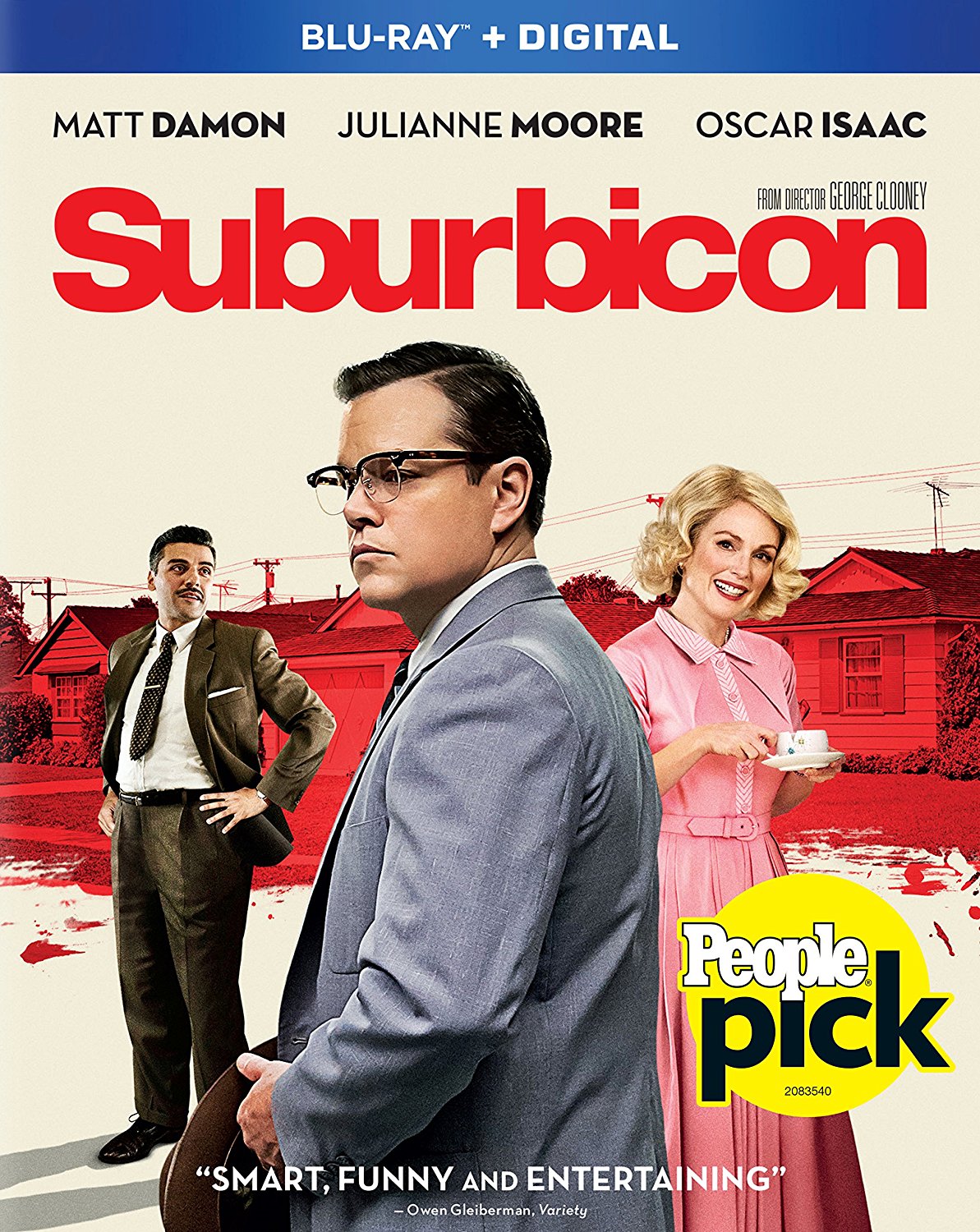