Among the greatest of all psychological horror movies, its impact made even greater by the fact that many of its most memorable moments were original ones (which inspired other filmmakers to copy its tropes exhaustively for the rest of the century and on into the next), Ealing Studio’s 1945 Dead of Night still brings forth shivery nightmares of both the waking and sleeping variety.

Among the greatest of all psychological horror movies, its impact made even greater by the fact that many of its most memorable moments were original ones (which inspired other filmmakers to copy its tropes exhaustively for the rest of the century and on into the next), Ealing Studio’s 1945 Dead of Night still brings forth shivery nightmares of both the waking and sleeping variety. An anthology of supernatural tales in varying degrees of creepiness and with tones ranging from comic to horrific, Dead of Night has lost none of its power to generate fear and provoke endless discussions about its meanings, ironies, and improbabilities.

Architect Walter Craig (Mervyn Johns) goes to Pilgrim’s Farm to see potential client Eliot Foley (Roland Culver). When he arrives at the house, he gets the feeling that he has been there before. Once inside, he meets a group of people who seem oddly familiar even though he has never met any of them in his life. He tells them that he has dreamed about each of them and begins to list events that occurred in his nightmare. Walter’s strange revelations begin a conversation among the group, and several persons present admit to having experienced a strange, unexplainable event, and they each tell their stories to him. All the while, psychiatrist Dr. Van Straaten (Frederick Valk) attempts to explain away the supernatural elements of their stories with rational explanations of natural events.

John V. Baines, Angus MacPhail, and T.E.B. Clarke’s screenplay has some of its basis in the tales of E.F. Benson and H.G. Wells, but much of the script is original in nature. What makes the film so indelible is that the framing story which sets up each of the five unusual tales has its own sense of creeping, shuddery unease, and its use becomes even more dazzling when we reach the film’s coda which ties the tales up in an inarguably un-neat, considerably ironic little bow dripping with misgivings. As for the tales themselves, four of the five are masterful: race car driver Hugh Grainger’s (Anthony Baird) encounter with an overly friendly and inviting hearse driver (Miles Malleson), cheery Sally O’Hara’s (Sally Ann Howes) strange encounter with the ghost of the infamous murdered child Francis Kent, newly married Joan Cortland (Googie Withers) relating her and her husband Peter’s (Ralph Michael) uneasy dealings with a haunted mirror, and Dr. Van Straaten’s case concerning a tortured ventriloquist (Michael Redgrave) and his uncooperative dummy. Only the comic interlude narrated by head of the house Eliot Foley about friendly golfing rivals George Parratt (Basil Radford) and Larry Potter (Naunton Wayne) vying for the hand of the lovely Mary Lee (Peggy Bryan) slightly disappoints in this heady company, but its intention is clear: it’s a palette cleanser to set the audience up for the truly terrifying ventriloquist’s tale. Basil Dearden directs the framing story and the first tale offering a smooth and solid start to the terrors (and using nightmarish camera angles at the climax when things go whirling out of control) with the other directors handling their tales with great dexterity. Alberto Cavalcanti takes the ghost story with the dead child and the ventriloquist’s saga (each shuddery in its own way) while Robert Hamer handles the haunted mirror story, and comedy directing legend Charles Crichton inserts what drollness he can with the golf buddies’ account. If the script has a weakness, it’s with the use of the psychiatrist who’s always attempting to bring rationality to these supernatural stories. He ends up appearing a fool when it’s obvious that for these events, no explanation is good enough or indeed necessary at all.

Unquestionably, the performance of the film belongs to Michael Redgrave who begins with his ventriloquist slightly unbalanced and then inches more and more toward uncontrolled hysteria by the end. You’ll not soon forget the closing images of this tortured soul as his tale draws to a close. Mervyn Johns makes a fine everyman who’s experiencing these stories for the first (?) time, and Googie Withers and Ralph Michael are appealing as the young marrieds tortured by forces beyond their control. For those who enjoyed their adventures as Charters and Caldicott in The Lady Vanishes and other pictures, Basil Radford and Naunton Wayne substitute golfing obsession for cricket allegiance but are otherwise the same quaint pair. Sally Ann Howes as the upbeat Sally O’Hara makes a nice debut to films even if a couple of her line readings are a bit on the strained side.

The liner notes claim a 4K restoration at play here, and the 1.37:1 original aspect ratio is replicated in this AVC transfer. While sharpness is outstanding and a nice film-like grain level is present throughout, there are more scratches than one might wish throughout the presentation. That doesn’t disrupt the gorgeous grayscale rendering offering deep blacks and clean whites, but the image is not absolutely pristine. The movie has been divided into 8 chapters.

The DTS-HD Master Audio 2.0 mono sound mix seems to veer toward the trebly side of the audio spectrum with an occasional muffled quality that’s a bit disconcerting. Otherwise, though, age-related problems with hiss, crackle, thumps, and hum are long gone, and the mix of dialogue, the most effective music score by Georges Auric, and the sound effects blend together quite nicely.

Audio Commentary: an expert one by film historian Tim Lucas goes into detail about the film’s origins, its key players before and behind the camera, and its reception in England and in America. There are some silent passages, but the next set of comments is always worth the wait.

If you’re a fan of The Twilight Zone’s “Twenty-Two,” “The Mirror,” and “The Dummy,” Alfred Hitchcock Presents’ “The Glass Eye,” William Goldman’s Magic, or dozens of other TV shows and films that feature creepy ventriloquist’s dummies, premonitions of death, haunted mirrors, or ghosts from the past interacting in the present, then you’ve got a great set-up for Dead of Night which in many cases innovated those motifs. In the intervening seventy-four years, this tight little tale has lost none of its power to grip and jolt, and it’s a pleasure to have it now in a beautiful if still slightly imperfect high definition release. Highly recommended! 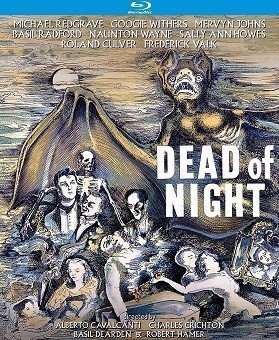