Towards the end of his tenure at Universal, producer William Alland had successfully produced a couple of sci-fi classics (The Creature from the Black Lagoon, Tarantula), but had shifted to more cost-effective efforts following the success of Columbia’s It Came from Beneath the Sea (1955). One of those efforts, The Land Unknown, had it roots in a real life expedition that discovered an area of unusually warm water in Antarctica a decade prior, and speculated on the idea of a prehistoric world possibly lurking beneath the surface. Universal originally released it as part of a classic sci-fi set on home video, but Kino has licensed it for its Blu-ray debut.

During a naval expedition to Antarctica to discover the origins of inexplicably warm water detected from a previous expedition, a group lead by Commander Hal Roberts (Jock Mahoney) is forced to land in a crater due to a sudden storm. When the helicopter lands, not only do they find the area hotter than the surrounding area, but it’s also containing a prehistoric jungle filled with dinosaurs and man-eating plants! Also within this jungle is a survivor of a previous expedition and the stranded crew may just need his help in order to escape this land that time forgot alive!

For a modestly budgeted film, The Land Unknown does manage to be moderately entertaining, although it was conceived to be a bigger picture than what finally turned out. Originally planned to be shot in color and directed by Universal’s go-to director for science fiction, Jack Arnold, plans for that were scrapped once the budget got slashed and the price tag for some of the special effects (notably one mechanical dinosaur) prevented those ambitions from being reached. Even so, director Virgil Vogel does manage to keep a steady pace and there are some effective shots in black and white; even some of the stock footage integrated here is of better quality than previous Willam Alland productions like The Mole People and The Deadly Mantis. The major Achilles heel here is an underdeveloped script and rather ho-hum special effects – in addition to the mechanical dinosaur, stock footage of lizards were used in a couple of scenes as well as an actor in a T-Rex suit. Overall, the film is watchable and has some enjoyment but probably not something most of the actors involved probably put highly on their resumes as far as achievements are concerned.

Jock Mahoney is a serviceable lead as Commander Roberts; he’s better known for his appearances in a handful of Tarzan movies in the 1960’s – two of them as the fabled ape man himself. Shirley Patterson, billed here as Shawn Smith, has a decent part as the reporter who tags along with the expedition; it would be one of two solid parts in her brief career – her next film, It! The Terror Beyond Space (1958), would be her last as an actress. Frequent character actor Henry Brandon casts a memorable impression as the stranded doctor the crew encounters; Douglas Kennedy has a brief walk on part as the captain who briefs the crew on the expedition at the beginning of the movie. Other notable appearances include Universal contract player William Reynolds as the lieutenant on the expedition, Phil Harvey as the machinist who just can’t seem to help himself in making many mistakes, an uncredited Bing Russell as a radio operator, and Tim Smyth as the T-Rex the crew has to fend off.

The film’s original 2:35:1 CinemaScope ratio is preserved in this HD transfer. Film grain is organic, with shifts in density apparent in the stock footage utilized; fine details and gray scale are also faithfully rendered as well. Age related problems – like dirt, scratches, marks, and tearing – are few and minor, likely making this the best the film has looked on home video.

The film’s original mono soundtrack is presented on a DTS-HD Master Audio track. Dialogue is strong, along with the sound mix, with solid fidelity given to the film’s score – composed by an uncredited combination of Henry Mancini, Heinz Roemheld, Hans J. Salter, and Herman Stein. The track is a bit soft, but there’s hardly an instance of age related issues other than that, which makes this likely the best the movie has sounded on home video.

Commentary with film historians Tom Weaver & David Schecter – Recorded for this release, Weaver goes over the film’s production history while Schecter highlights the music of the movie; as an added bonus, the commentary also features archival comments – some done by actor recreation – from members of the cast and crew including director Virgil Vogel, producer William Alland, actors Jock Mahoney, William Reynolds, and Tim Smyth, and author Jan Allen Henderson.

Animated Image Gallery (1:48) – This brief montage of 32 promotional stills is set to a selection from the film’s music.

Bonus KLSC Trailers – One Million Years B.C., War-Gods of the Deep, The Land That Time Forgot, The Island of Dr. Moreau, & The Neptune Factor

While not high on the achievement scale for Universal Sci-Fi, The Land Unknown is still a moderately entertaining film for what its worth. Kino has done a great job in giving the movie its Blu-ray debut, with solid marks in both audio and visual quality to go along with an informative commentary track. Recommend for fans of the genre and an easy upgrade from the previous Universal DVD. 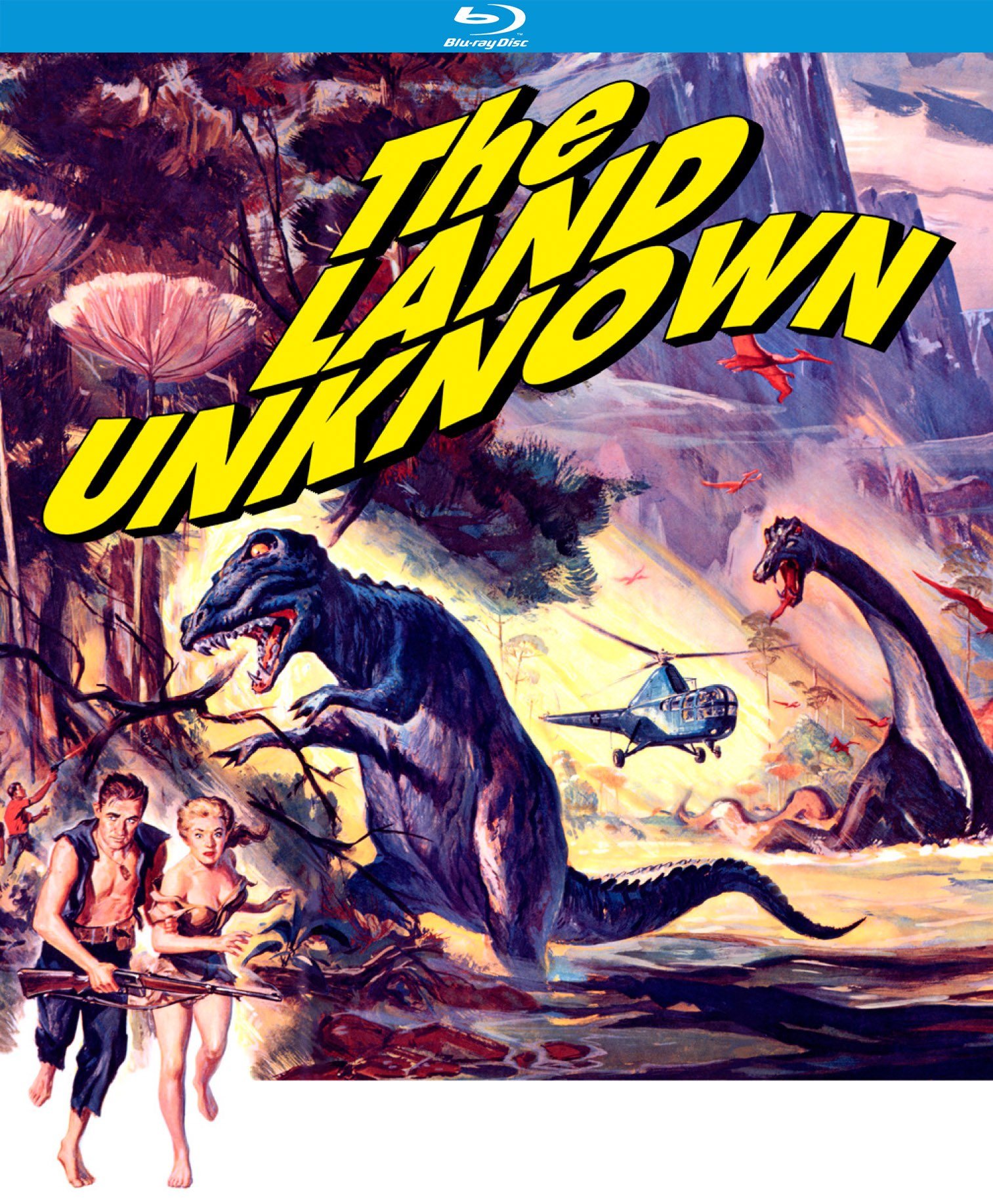