Director James Wan’s The Conjuring 2 reunites Patrick Wilson, Vera Farmiga and the key creative talent behind the 2013 hit horror film The Conjuring for another cinematic dramatization from the files of demonologists and psychic investigators Ed and Lorraine Warren.  Set seven years after the events of the first film with a prologue that touches on the Warrens’ experience with the famous “Amityville Horror” house , this sequel finds the Warrens coming to the aid of a single mother and her children experiencing paranormal phenomenon in their home in the working class North London neighborhood of Enfield.

In 2013, The Conjuring  set itself apart from other recent films in the horror genre by focusing strongly on craftsmanship and employing top notch actors capable of nuanced performances.  In The Conjuring 2, Director James Wan picks up where he left off and delivers more of the same.  While he does not focus on breaking new ground in terms of the story or overall arc of the characters, he does apply the same level of inventiveness in the numerous “make you jump” set-pieces spread throughout the film.  As creative and fun as these sequences are in their staging, there are arguably too many of them.

The film does not manage to bring the Warrens together with the Hodgson family in North London until half way through  its protracted two hour and fourteen minute running time.  Establishing the Hodgsons and the details of their haunted home dilemma independently of the Warrens is important, but this sequel does not do so as efficiently as its predecessor.

That being said, The Conjuring 2 still offers plenty for fans of haunted house and demonic possession stories to love and once again assembles an outstanding cast.  Patrick Wilson and Vera Farmiga continue to impress as the Warrens, with Farmiga in particular managing to deliver lines of dialog that on their face seem awkward and stilted with total conviction.  The cast playing the Hodgson family are equally excellent, with Frances O’Connor (as Peggy, the single mother) and Madison Wolfe (as Janet, the daughter most affected by the malicious spirit in the house) being particular stand-outs.

The 1080p AVC encoded presentation is letterboxed to the film’s original 2.4:1 theatrical aspect ratio. Shot with an Arri Alexa camera, the Blu-ray presentation is digital perfection.  Colors are somewhat muted to reflect the wintry North London setting, but not to the point of distraction.  Contrast and black levels are very carefully rendered which is a credit to both the encoding and the film’s moody and elaborate lighting set-ups which were achieved in conjunction with a whole lot of camera movement.

The primary audio option is a Dolby Atmos track encoded via the Dolby TrueHD 7.1 codec.  My set up only allowed me to listen to it in downmixed 5.1, but the results were still very impressive.  Dynamic range is through the roof and often used for the many effective “make you jump” moments.  The surrounds are used very effectively to create spooky ambiance as well as well-conceived  spatial effects that integrate perfectly with on-screen cues.  Fidelity is very good both for the dissonant orchestral score as well as for dialog and effects.

When the disc is first played, the viewer is greeted with following skippable promos:

From the disc’s “Special Features” menu, the viewer has access to the following:

The Conjuring 2: Hollywood’s Haunted Stage (5:08) features Security Guard and Paranormal Investigator Johnny Matook taking a team through the Warner Bros. Lot Stage 4 to look for evidence of its reputation as being a haunted soundstage.  Matook takes it very seriously, but skeptics will not be convinced.

The Sounds of Scary (7:00) is a featurette on the film’s eerie music.  It includes footage of scoring sessions with Orchestra, a male choir, & a children’s choir.  It also touches on Joseph Bisahara’s methods for scoring and recording, and Bishara’s working relationship with James Wan.  On camera comments are provided by Composer Joseph Bishara, Scoring Engineer/Mixer Chris Spilfogel, and Orchestrator Dana Niu.

Deleted Scenes (6:31) is a collection of four scenes cut from the final film.  They are not individually selectable from the disc menu, but they are chapter encoded if the viewer wishes to skip to a particular one.

In addition to the review copy of the disc, Warner Bros. also forwarded a link to this “Visions 360 Experience” video that lets the viewer walk in the shoes and experience the visions of Lorraine Warren.  It can be viewed in 360, Google Cardboard, or via a VR Headset.  I thought readers of the review might enjoy it, so here it is:

While The Conjuring 2 does not improve on its more efficiently constructed predecessor, it does feature high production values, inventive scares, and strong performances that make it a cut above most films in the haunted house and possession horror sub-genres.  It is presented on Blu-ray with near flawless audio and video and a smattering of electronic press kit style featurettes focusing on the film and the real life events that inspired it. 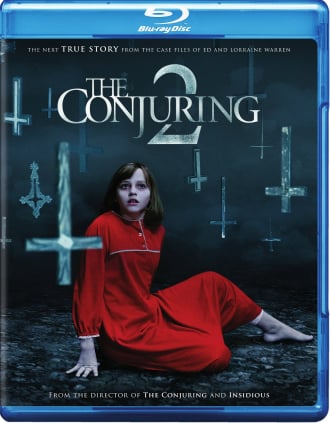