John Boorman’s Zardoz is in some ways like that little kid who used to live next door: he’s messy and can be irritating at times but he can also be a lot of fun to be with and might sometimes even guide you toward some valuable revelations about your own life. The movie has all of those attributes, but it’s also absorbing and after several revisits somewhat profound and yet never dull. And like the Planet of the Apes series, The Omega Man, and Soylent Green from that same era of filmmaking, the notions of an apocalyptic future for mankind are haunting and hard to forget once you’ve experienced them. 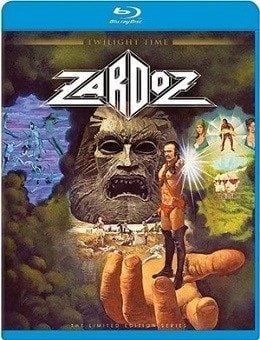 Zed (Sean Connery) is one of a group of skilled assassins called Exterminators whose duty is to wipe out the child-rearing Brutals who live in an area of the world called the Outlands. The Exterminators answer only to their god, a gigantic flying stone image known as Zardoz. Curious about Zardoz's true divinity, Zed chooses to investigate. His disbelief is confirmed when the god (Niall Buggy) proves to be a man named Arthur Frayn, a tool of the Eternals, a secret society of brilliant asexual beings who possess immortality and exploit the masses who aren’t allowed in their privileged area called the Vortex. Knowing the truth, Zed sets out to end the hoax, but what he finds once he’s inside the Vortex will take even him by surprise.

A true auteur work, John Boorman not only produced the film but also wrote and directed it. His richly philosophical notions about the nature of life and death, the double-sided coin of immortality, and man’s innate nature to survive against all odds might sometimes get jumbled in his non-linear storytelling and his occasional op-art visuals, but there is no denying that the movie has been made for thinking individuals, and it’s impossible to simply cast it aside without ruminating about its deeply considered (and somewhat controversial) notions about a diseased society and its ultimate cleansing. True, one can simply sit back and enjoy the wacky imagery (the floating god statue, a hall of mirrors which will bring back memories of The Lady from Shanghai), discreet nudity (apart from star Connery in a skimpy red diaper, a fair number of bare female chests), and imaginative production design by Anthony Pratt without trying to piece together what the film is truly trying to convey in its own roundabout way, but that would do a disservice to the movie. Boorman sets the disquieting tone of his 2293 society from almost the first moments of the movie, and it never lets up with several sequences (an orgiastic search for new life, Zed’s several chases through various futuristic sets, the climactic annihilation) remaining firmly ingrained in the psyche long after the film has concluded. It’s not perfect: there are scenes that don’t work (receiving the knowledge of the ages is just too tough a nut to crack) and some visual tricks that seem to be there just for the sake of being artsy, but it’s neither a complete failure nor Boorman’s best work, both of which it’s been called.

Sean Connery was as good a choice as any to be a primitive kind of superman who might end up being the world’s next Adam (Burt Reynolds was Boorman’s first choice, and he would have been equally as good), and he displays his physicality as well here as he did in all of those James Bond films which made him famous. Of the inhabitants of the Vortex, the best performance is given by Sara Kestelman as May, a resident who’s completely curious about this mortal’s inner workings. Charlotte Rampling is less impressive as May’s partner who opposes allowing Zed to continue living but who comes to figure importantly in his future. John Alderton has some ingratiating scenes as Friend who becomes just that to Connery’s Zed but who has tired of his immortality and seeks new experiences he know he’ll never have. Niall Buggy is rather subtly campy as Arthur Frayn who admits early on he’s a puppet master and then later proves himself to be just that long after we’ve forgotten he’s made that claim.

The film’s Panavision 2.35:1 theatrical aspect ratio is faithfully presented in 1080p resolution using the AVC codec. Because of the immense amount of diffusion used in Geoffrey Unsworth’s exquisite photography, it’s hard to know what scenes were meant to be sharp and which scenes were meant to be soft. In the indoor sequences that don’t involve fog or smoke, sharpness is very good, and color is robust with natural skin tones predominating. Black levels, however, seem overly light and somewhat lacking depth. The movie has certainly been cleaned up, however, with no examples of dirt or dust and only the slightest amount of jitter. The movie has been divided into 24 chapters.

Though the case says the audio codec is DTS-HD Master Audio 2.0, the readout on my receiver stated DTS-HD Master Audio 5.1. It’s certainly not a surround mix, however, as the sound comes most strongly through the center channel as one would expect from a film from this period. Dialogue is excellently presented, and the mixing with the sound effects and David Munrow’s music (with an assist from Beethoven) is first-rate. Again, any age-related problems which might have been present have been minimized in this fine audio encode.

Audio Commentaries: the disc offers the original John Boorman commentary (a must) and a lively conversation on the second track with producer Nick Redman and film journalists Jeff Bond and Joe Fordham. Fans of the film will certainly want to hear both.

Radio Spot Ads: six spots available separately with four running one minute each and the other two running half a minute each.

Six-Page Booklet: contains a nice selection of black and white and color stills, original poster art on the back cover, and film historian Julie Kirgo’s sincere appreciation for the movie.

John Boorman’s Zardoz is a thought-provoking sci-fi adventure. Yes, it’s occasionally weird and certainly not made for casual viewing, but for those willing to invest some time and some thoughtful discussion afterwards, it holds its own rewards. There are only 5,000 copies of this Blu-ray available. Those interested should go to www.screenarchives.com to see if product is still in stock. Information about the movie can also be found via Facebook at www.facebook.com/twilighttimemovies.

You almost make me want to buy it. Almost.

This is one of those grandiose sci-fi films that I saw multiple times in my youth. It will be ... weird ... seeing it again after so many years. It was a different time, the early 70s.


Trippy. That's the word I might have used to describe the film.

Zardoz was never one of my favourite films - I suspect it will seem a bit dated now - but I've always admired Boorman's work, generally. No one could ever accuse him of being afraid to make something different though.

well, thats just great. Only a couple of months later, FOX Europe went ahead and issued a 4K restoration with DTS sound


How is it that Twilight Time missed out on this? it isn't even advertised as 2K


Look on Amazon.uk for the info


I went ahead and got the Steelbook edition from them

How do you know the Twilight Time version isn't from the same master? It seems unlikely that Fox would create two new HD masters within the same year. The TT disc also includes DTS audio.

TT does not always advertise when it's a new 4K scan. Earlier in the year, they put out both "Journey to the Center of the Earth" and "First Men on the Moon" on the same day. Both were from new 4K masters, but only "Journey" had that written on the package.

because they would have proudly advertised it as a 'feature' like they have done with Journey to the Center....

anyway, word gets around-and nobody has mentioned this as 4K-which i think would be noteworthy

Word did get around the FMITMoon was 4k
You must log in or register to reply here.